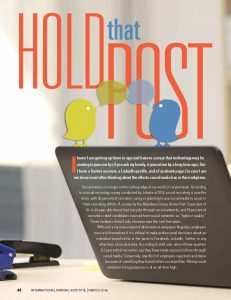 What hiring managers say employees and candidates should think about before using social media, even on their own time.

I know I am getting up there in age and have to accept that technology may be starting to pass me by (if you ask my family, it passed me by a long time ago). But I have a Twitter account, a LinkedIn profile, and a Facebook page. I’m sure I am not alone in not often thinking about the effects social media has in the workplace.

Social media is no longer on the cutting-edge of our world; it’s mainstream. According to a social recruiting survey conducted by Jobvite in 2014, social recruiting is now the norm, with 93 percent of recruiters using or planning to use social media to assist in their recruiting efforts. A survey by the Aberdeen Group shows that 73 percent of 18- to 34-year-olds found their last jobs through social networks, and 59 percent of recruiters rated candidates sourced from social networks as “highest quality.” These numbers should only increase over the next few years.

With such a massive amount of information at everyone’s fingertips, employers must ask themselves if it is ethical to make professional decisions about an individual based on his or her posts to Facebook, LinkedIn, Twitter, or any other form of social media. According to staff.com, almost three-quarters (73 percent) of recruiters say they have made successful hires through social media. Conversely, one-third of employers rejected candidates because of something they found in their social profiles. Mining social media for hiring purposes is at an all-time high.

The Sites
Facebook launched in 2004 as a social outlet and way for college students to connect with each other. Currently, an average of 1.01 billion people use the site every day. Twitter launched with its first tweet in March 2006 and boasts 320 million monthly active users. LinkedIn was the first major social media site; it was introduced in May 2003 and has more than 400 million members. Who knows what the next social media platform will be? But certainly there will be millions of people signing on when it premieres.

Almost everyone and everything has created some sort of social media account, especially on Facebook. Students, parents, grandparents, retailers, municipalities, entertainment outlets, and numerous businesses are among those with Facebook pages. The list goes on and on. The ability to connect so easily with everyone is both a positive and negative aspect of what social media provides us. Of course it was inevitable that businesses soon followed individuals and created their own social media pages as a means of reaching out to their customers—at no cost to the organizations—and that eventually these sites would be used in the process of hiring and firing employees.

According to a Reuter’s report, the online career market of just LinkedIn and Monster Worldwide is worth about $6 billion a year. Last December, Facebook announced plans for Facebook at Work, explained as a professional version of its social network; we expect that launch later this year. It’s an attempt to compete with established career sites such as LinkedIn. Facebook claims the professional version will be similar but totally separate from its current social version, so users of the new service will maintain separate profiles for each.

Your Privacy
Websites and social media sites have privacy policies, but most people do not bother to read or attempt to understand them. Those policies disclose some or all of the ways a party gathers, uses, discloses, and manages a customer or client’s data. These social media sites gather information about you, your location, your browser history, etc. and use that data to determine what advertisements to show you. Of course, this is just one way social media can affect and market to someone. If you look, you will find hundreds of examples of how information could negatively affect someone, especially a professional trying to gain or keep employment. Some of the decisions people make will amaze and astound you—especially what they choose to share with the world! Open posts allow potential or current employers and customers to know about everything you are doing. They can see if you post a picture or status update while out sick and see any negative posts about the company or co-workers, and they can tell if you are posting while at work.

The Job Search
A major change that has recently become incorporated into prospective employee searches is having hiring professionals review photos and posts on candidates’ social profiles. Public pictures of someone on a drinking binge, doing drugs, or taking part in other illegal or negative activities are never appealing to companies looking for a well-mannered and down-to-earth individual. These red flags may negatively affect how someone is viewed as a viable employee. Unfortunately, you never really know what might turn off a prospective employer, so it would be best to avoid any and all questionable material. If there are a lot of posts about parties an individual attended or how much they dislike working, etc., a hiring professional may decide there is just too much potential baggage and look into another applicant who has a cleaner profile.

Of course, no company can discriminate based on any protected group (age, religion, sexual orientation), but it is wise to remember any information that is public knowledge may still be viewed negatively and you may not even be aware that your profile was a deciding factor.

Online Contacts
Everyone should keep in mind that being friends with co-workers or the company/organization on Facebook may not be a wise idea. Companies can still keep a virtual eye on people they’ve already hired. While your employer may not be actively looking into your so-called private life, that doesn’t mean it completely ignores you.

There are a multitude of stories on social media in which individuals posted negative comments about going to work or how they scammed the boss for a day off, all the while forgetting that their boss is also a follower on Twitter (most Twitter streams are unlocked and open to the world, followers and non-followers) or friend on Facebook. When the boss saw this material, the poster was reprimanded or even left unemployed.Whether or not you believe these are proper means of communication or decorum, it happens. Karma has a funny way of evening things out.

I am responsible for a number of human resources issues at my organization, including interviewing potential candidates for open positions. I often find myself searching the names of applicants via the Internet and have, on several occasions, decided not to interview a candidate based on what I have seen on social media sites. If two equally qualified candidates apply for a position, social media findings could be the deciding factor on the offer of employment. I do not propose to be a judge of moral or social conduct, but I know the image my company is trying to convey. It’s clear whether a person may be a viable candidate or a proper fit for our organization. Knowing in advance that someone has a perpetual bad attitude at work, is frequently hungover from drinking binges, or engages in other negative behavior can easily sway a hiring manager’s opinion.

Last year, my company received more than 300 employment applications, and I interviewed nearly 200 candidates in the process of hiring 52 new employees. After working in this position about a month and realizing the daunting task of handling a vast amount of interviews, I incorporated a few interview forms to assist in the hiring process and to keep it consistent among all managers. After tweaking the forms a few times, I incorporated a social media review area and began using this tool to further vet potential employees.

Of course, there are a vast number of reasons an individual may not be deemed a proper employment candidate for our organization and not called in for an interview; however, once an applicant is determined to be a potential candidate or is interviewed, a search on the social media sites is performed. So far, on eight separate occurrences, information was gathered that questioned the overall character and decision-making abilities of a potential employee. At that point, we made the decision to not pursue employment any further. If this information was gathered after an interview was already conducted, management discussed and then made the decision to either not offer employment or to bring the candidate in for a second interview to discuss. Of course, social media is not the deciding factor in hiring, but it along with all of the other information that is provided should be enough to make an educated decision.

Whether you feel this is an invasion of privacy or not, it would be wise to accept the practice of using social media as a hiring tool. It does and will continue to exist. In addition, all employers should review their policies governing employee communications, especially the use of social media during work and non-work times. This will ensure compliance with the National Labor Relations Board and set the proper standard expected of everyone in the organization. I know it is not a fair world, but we owe it to ourselves and our employers to make good, wholesome decisions in how we represent ourselves and who represents our company—after all, the world may make a decision based on that perception!

Social media is a strong tool for communication and networking but must be used properly. If you are interested, please follow me on Twitter @JohnVCollins and friend me on Facebook. If I can catch up to the technology, I may even respond back!

JOHN V. COLLINS, CAPP, is operations manager with Transport U, LLC. He can be reached at jcollins@transportu.net.