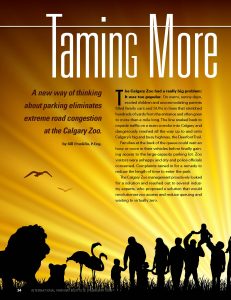 A new way of thinking about parking eliminates extreme road congestion at the Calgary Zoo.

The Calgary Zoo had a really big problem: It was too popular. On warm, sunny days, excited children and accommodating parents filled family cars and SUVs in lines that stretched hundreds of yards from the entrance and often grew to more than a mile long. The line snaked back to impede traffic on a main corridor into Calgary and dangerously reached all the way up to and onto Calgary’s big and busy highway, the Deerfoot Trail. Families at the back of the queue could wait an hour or more in their vehicles before finally gaining access to the large-capacity parking lot. Zoo visitors were unhappy and city and police officials concerned. Complaints rained in for a remedy to reduce the length of time to enter the park. The Calgary Zoo management proactively looked
for a solution and reached out to several industry experts, who proposed a solution that would revolutionize zoo access and reduce queuing and waiting to virtually zero.

Evolution to a Parking Crisis
The Calgary Zoo is located in the City of Calgary, a booming metropolis in Alberta, Canada, that’s home to some 1.2 million citizens. As the city grew, so did the zoo. The Calgary Zoo remains one of the most popular and endearing attractions in Calgary and is constantly innovating to increase attendance while providing a comfortable environment for the animal residents.

Initially, parking at the zoo was free. In time, the zoo began to look at new and additional revenue models with a careful eye on retaining an attractive and family-friendly demeanor. For example, the zoo wanted the ability for vehicles to enter the zoo parking lot, drop off people, and leave without paying for parking if the process took less than 30 minutes.

In 2009, the zoo embarked on a major parking lot renovation that included expansion of the parking facilities and the installation of a gated automatic parking access system comprised of credit card and zoo card readers, ticket issuers, and gates.

Soon the Calgary Zoo was welcoming 1.5 million visitors annually and boasted 70,000 members— 30,000 of whom subscribed to contract parking. Contract parkers used the same magnetic stripe-equipped zoo card as other zoo members, but theirs were configured to open parking lot gates when inserted into card readers. In theory, the gated system should have worked just fine; in reality, it quickly became a serious headache for both zoo members and managers alike.

Congestion at the Gates
Occasional (non-member) zoo visitors would stop at the automatic kiosks, press a button, and pull a ticket. The visitor would pay with a credit card at the gate either on the way in or out of the park. Zoo members (who pre-paid for parking) could just insert their zoo membership cards into the card reader and, once validated, the gate would rise for access to the park.

Unfortunately, the system didn’t work nearly as well in practice as in theory. Zoo attendees had multiple difficulties with it:

Moreover, these challenges occurred at both the entry and exit, both of which required card insertion.

Independent consultants observed zoo members entering and leaving and characterized the duration for either ingress or egress to be at least 30 seconds on average, occasionally stretching to eight minutes or more. The lengthy time for a successful transaction caused large queues to rapidly form. Zoo members complained of waits of an hour or more, and lineups stretched for 1.5 miles in peak conditions and occasionally to almost two miles.

The massive backup of vehicles spilled onto one of the busiest roads into the downtown core, and when the queues reached their maximum of nearly two miles, stretched right out onto a major highway. Reactions were predictable.

After two years trying to use the troublesome gated system, the Calgary Zoo approached the Calgary Parking Authority (CPA) for ideas on solving the seemingly intractable problem.

The CPA fulfills the City of Calgary’s parking mandates and implements the municipality’s parking policies by managing on- and off-street public parking facilities and enforcement programs and providing parking advisory services. The CPA and Tannery Creek Systems had worked on a number of fixed-camera solutions for Calgary’s ParkPlus System using pay-by-license-plate methodology. The fixed-camera system eliminated queuing by removing gates and entry readers and moving pinch points to pay machines located in the lobbies of the garages. Here as many pay stations as were reasonably required were installed, greatly increasing the number of visitors who could be served simultaneously. Moreover, if a pay machine failed, others were available. Alternatively one could pay using a smartphone and MyParking app.

CPA is a very progressive organization, testing and implementing new and innovative technology and organizational models. Because it controls both parking and enforcement, the organization can create business models that optimize parker experience, parking resources, and operations, facilitating the growth of local business while retaining an efficient revenue stream for the city.

The Calgary Zoo requested the solution offer these features:

Mike Derbyshire, general manager of the CPA, says, “When the zoo approached us and laid out the problem they were having with queuing, we knew that a gateless solution was the answer because we were already using it in our parkades with great success.”

It quickly became apparent that a gantry design would provide the best results. This design provided an excellent view of license plates, provided clearance for large tour buses, and made it difficult for vandals to damage cameras. On the ground, light sensors or lasers assembled in pairs could determine the direction of vehicles and turn on the appropriate cameras and lights.

Design and development started in January 2014 and took approximately nine months, including the gantry, civil engineering, and design of a large outdoor system. In July and August, ground preparation was performed—installing islands, conduit and pylons, and an equipment shed. By September, the final push was on.

Miles Dyck, now with the city roads department but formerly with the CPA, says, “The access and egress issues at the zoo parking lot created significant challenges for the CPA, and this was our first installation of the Park-Plus System outside of our own parking facilities. … The tight teamwork between the Calgary Parking Authority, the zoo, and Tannery was instrumental in successfully implementing each component of the project, including Tannery’s ongoing support after construction was completed and it became operational.”

Results So Far
The zoo access system went live in October 2014 and has been in continual operation since. Compliance is incredibly high at 99.3 percent. Because the system detects all vehicles entering and exiting, excellent counts are obtained, and the prominence of the camera gear is highly persuasive to those who might otherwise cheat.

The average duration of vehicles passing through the camera system is quick, averaging about four seconds and some 10 times faster than the previous gated system. In addition, because vehicles simply drive through, previous experiences of malfunction or other significant problems (such as card misreads) are nonexistent and major delays, traffic congestion, and revenue forfeiture are avoided. The numerous pay stations are conveniently located in the parking lot and greatly improve throughput. Zoo members with contract parking are already registered by license plate, are automatically recognized and processed when they arrive, and have no need to do anything more when visiting the park.

Taxis and parents dropping off their passengers have up to 30 minutes to do so without incurring parking charges, and the system automatically checks and validates their free time duration. The bidirectional ability of the system captures all vehicles entering and leaving the park no matter which lanes they chose to use, and the zoo has the ability, if required, to redirect all four lanes to exit, expediting emptying of the park.

The system has been reliable and was designed with redundancy: Computers control only one lane, and if they fail, the lane can be temporarily blocked and the second redundant lane used instead.

The biggest challenge to date has been with snow occasionally causing spurious triggering of lasers and sunset and sunrise sometimes creating solar glare on the plates. The project partners are working on these issues to minimize their effect, but they’ve had no apparent affect on compliance and revenue.

Perhaps the most important conclusion is by the client, the Calgary Zoo, whose director of guest services Peter Findley, says, “The Calgary Zoo is very pleased with the Calgary Parking Solution ParkPlus parking system for many reasons. The system has eliminated the backup that occurred accessing our parking lots, it is accurate, and the equipment works extremely well in all types of weather. The integration of the program did not inconvenience our members or our staff.”

All serious problems caused by delays at the entrance and exit have been resolved resulting in much happier Calgary Zoo members, zoo management and city and
police officials.

BILL FRANKLIN, P.Eng., is president of Tannery Creek Systems, Inc. He can be reached at bfranklin@tannerycreeksystems.com.