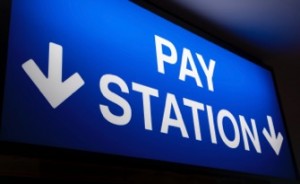 When I started my parking life as a student parking attendant at the University of Minnesota about 1975, only several of the parking decks had a level with a ticket spitter. Even the decks that had spitters had a time clock that one used to manually compute the time spent and then we had to multiply (or use the chart on the wall) the time spent vs. the rate to charge the customer.

Over the years I have used spitters/fee computers where you simply entered the time a driver entered and the fee computer did all the calculations and displayed the fee due. Some of the private lots around campus had large metal pay-on-foot boxes: You either put your money into the slot with your stall number, or some had an envelope that you wrote your license plate number on, put your cash in, and dropped into the box.

At least in Minneapolis, there are still many (about 118) of these honor-box lots. Some now use an envelope with a serial number on it, but there’s still no way to prove you paid. When I was assistant parking manager, I received several complaints from people who swore they paid to park but were still towed. (Again, these are after-hours, unattended, private lots being confused for city parking lots). Now, the City of Minneapolis is doing something about it.

Last week, the city council regulatory committee voted to eliminate parking lot honor boxes. The primary reason for this change is the lack of proof of payment, leaving customers in the lurch if they contest a citation or tow.

Unattended lots will be required to install electronic payment stations at a cost of between $12,000 and $15,000, or use a lower-cost, pay-by-phone system. The rules do not apply to lots with attendants or those that require an access card to enter.

The change includes an exemption allowing lots to continue using the honor boxes, but preventing them from towing cars unless they have evidence a driver has twice failed to pay for parking within a six-month window.

The Minneapolis StarTribune has an article viewable here. At the end of the article are comments including the idea of using your cell phone to record you putting money in the envelope and the envelope into the box.

Times are changing and so is the technology.

Scott Kangas, CAPP, is parking manager of the City of Fayetteville, Ark.