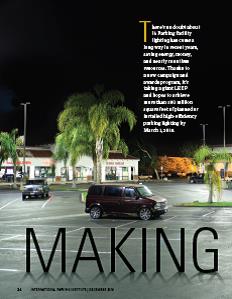 There’s no doubt about it: Parking facility lighting has come a long way in recent years, saving energy, money, and nearly countless resources. Thanks to a new campaign and awards program, it’s taking a giant LEEP and hopes to achieve more than 500 million square feet of planned or installed high-efficiency parking lighting by March 1, 2015.

In September 2012, the Building Owners and Managers Association (BOMA), U.S. Department of Energy (DOE), Green Parking Council (GPC, an affiliate of the International Parking Institute), and International Facility Management Association (IFMA) started the Lighting Energy Efficiency in Parking (LEEP) Campaign and awards with the goal of getting parking facilities to install high-efficiency equipment (fixtures and/or controls) to reduce their energy use.

The energy used in lighting parking facilities (lots, structures, garages, and ramps) in the U.S. in 2013 was nearly 1 percent of all energy usage (this value includes all sources of energy, including fuel for vehicles). Advances in lighting technology, lighting controls, and design practices since 2010 create ample opportunities for energy savings for parking facilities. Data from the first year of LEEP awards indicate that sites have realized savings between 45 and 90 percent in parking lots and structures, both new and renovated. LEEP’s Year 1 goal was for at least 100 million square feet of planned or installed high-efficiency parking facility lighting; the goal was surpassed, and year two has begun.

In year two of the LEEP Campaign, the International Parking Institute (IPI) signed on as a co-organizer. The LEEP Campaign also increased the goal for year two to 500 million square feet of high-efficiency parking facility lighting.

The campaign has multiple objectives. Obviously, energy savings is an overall objective, but beyond saving energy, savings documentation has been an objective as well. Data about current practices from LEEP have informed the industry about technologies being deployed and their results. Another objective is positive peer pressure—when one organization sees the savings achieved by another, it may be inclined to do the same.

Participants and Supporters
Who should join LEEP? A variety of organizations joined LEEP, both as participants (those that actually operate/own/manage the parking facilities) and supporters. Organizations that have participated in LEEP are located across the country and include commercial developers, retailers, military facilities, federal facilities, educational institutions, municipalities, and parking organizations. These include a number of innovative programs:

Benefits
There are many benefits to joining LEEP. If an organization achieves significant energy savings, it might be recognized for an award. In LEEP Phase 1, 12 organizations were recognized for their exemplary energy savings at the 2014 IFMA Facility Fusion Conference in Washington, D.C. LEEP Phase 2 awards will be conferred in June 2015 in Los Angeles at a BOMA conference.

To achieve its goals, the LEEP Campaign has deployed many different resources to help facilities realize energy savings. The LEEP Campaign website (leepcampaign.org) has case studies of significant energy savings to demonstrate what is possible and make the business case for installing high-efficiency lighting. The website also has calculators to help determine the economics of a possible lighting change to a given site. A list of lighting incentives is posted, along with performance specifications for high-efficiency lighting for parking lots and structures.

The Awards
The LEEP Campaign sponsors 12 awards; eight of those focus on savings at an individual site, with a set of awards for retrofit and new construction projects. For each type of construction, awards are available for both parking lots and parking garages (structures, ramps, or similar entities). Finally, awards are offered for the parking facility of each type that saves the greatest portion of energy, and another is given to the site that saves the greatest total amount of energy. These eight awards are structured this way to allow sites of any size the ability to compete.

One of the awards focuses on the best use of controls and multiple sites. Parking facilities are perfect spots (and in some areas, required by code) to incorporate lighting controls—devices that reduce output of the light fixture based on time scheduling, occupancy, daylight, or other variables. To truly realize tremendous energy savings in parking facilities, lighting controls are a virtual requirement. The best use of controls award recognizes facilities that are forward-thinking and push the boundaries of what is possible.

The Winners
LEEP Year 1 was a total success! Twenty-one organizations submitted detailed site information for awards. The cumulative area of the submitted data for awards was more than 160 million square feet of parking lots, structures, garages, and ramps—that’s more than 500,000 parking spots. Participating organizations used a variety of lighting technologies and controls to save 36 million kilowatt-hours (kWh), roughly the same amount of energy used annually by 3,000 homes. The significant energy savings resulted in $3.5 million in savings from electricity alone. Many sites also incurred additional financial savings from reduced maintenance, but those maintenance savings were not calculated for LEEP Year 1.

Organizations such as Walmart, Kimco Realty Corporation, Regency Centers, and Marine Corps Base Quantico all competed for the largest number of sites upgraded. Each of these companies and the military base submitted between 60 and 160 individual parking facilities for LEEP Year 1. Ultimately, Kimco won the absolute number of sites upgraded (160) through installing lighting controls and some new equipment.

The organizations that submitted data for LEEP Year 1 used a variety of lighting technologies that included high-efficiency metal halide, fluorescent, induction, and LED fixtures. Often, entities think that energy savings can only be achieved with a certain technology, but LEEP winners used many different technologies. In addition to the use of high-efficiency fixtures, awardees also incorporated and often layered together a series of lighting controls, including occupancy sensors, daylight sensors (parking structures), timers, and even some new novel control systems.

ROI
Of the 584 individual parking facilities submitted in Year  1 for awards, the average payback was shorter than six years. For some sites, the payback was fewer than two years, but one site had a rather long payback of nearly 20 years. Overall, most the paybacks were short, and this value was an outlier. However, the cost effectiveness of these sites needs to be considered in detail.

The cost of electricity in the U.S. ranges across the country. Per the U.S. Energy Information Administration, the rate in the West South Central part of the U.S. (Arkansas, Texas, Oklahoma, and Louisiana) is $0.0826 /kWh, whereas the rate in the Pacific noncontiguous section (Hawaii and Alaska) is $0.2703 /kWh. Because parking lot lighting is primarily used at night, the off-peak electricity rate is often lower. This is also an element to consider when using electricity rate as a metric for a site. Regency Centers’ economics changed after its retrofit at the Rona Plaza site in Santa Ana, Calif. Regency realized more than 80 percent energy savings in the new installation (LEDs with controls) compared to the original lighting (1,000 W high-pressure sodium and dusk-to-dawn operation).

However, after the installation of the new lighting, Regency’s rate changed, which subsequently affected some of its economics. Therefore, the original fewer-than-three-year payback changed. Electricity rates will differ by sites and rates will change, so sites need to research the specifics of their cost effectiveness as they consider different lighting installations.

Don’t only focus on electricity savings. To stay competitive with LEDs, virtually all light sources now offer long-life options with manufacturers claiming lives of their products of 40,000, 60,000, or even 100,000 hours. By upgrading the light equipment to longer life equipment, the annual cost for maintenance is reduced. In a parking lot, the cost of labor to put a person in a bucket truck and replace the light in the fixture can easily be $200 per pole. This cost quickly adds up, and many of the sites that participated in LEEP found the reduced costs for maintenance to be more valuable than the money saved from the energy savings.

Rebates or incentives range across the country. Many regional energy organizations (utilities and energy-efficiency groups) offer rebates for installing high-efficiency equipment and controls for parking facilities. The LEEP website includes a list by state and by application (structure vs. lot) of incentives from across the country. This list is a good resource for sites considering upgrading lighting. It should be noted that, in time, these organizations will offer less money and fewer options as state regulators determine that high-efficiency technology is becoming the standard option.

Look beyond the standard dollars for equipment options. If considering new equipment and controls to save significant options, utility custom options often offer incentives on the saved kWh, which might be more work but may be more economically sensible. For parking structures where equipment is being replaced, also look for demand reduction incentives. Because parking garages operate during the day, their use can affect peak load. Utilities offer incentives—dollars on the kilowatts reduced (less power installed)—that could be more valuable than other incentives because when demand is high, utilities have to turn on more expensive power plants to offset those costs.

Time affects the prices and payback, as well. Another major item to factor into the collective payback period of these new lighting installations is the price of lighting equipment. Many prices, especially for LED equipment, have gone down over the last few years. For LEEP, sites are eligible if installed after January 1, 2010. Most LED fixture prices are lower today and continuing to decrease; if the payback period in the document is long, it is worth seeing if that price is true today for your site.

Year 2 Underway
LEEP is currently in Year 2 which will end in March 2015. For sites to be considered for the Year 2 awards, which will be awarded in June at the BOMA 2015 Every Building Conference and Expo, sites need to submit data in March.

Michael Myer is a lighting engineer with the Pacific Northwest National Laboratory. He can be reached at michael.myer@pnnl.gov.