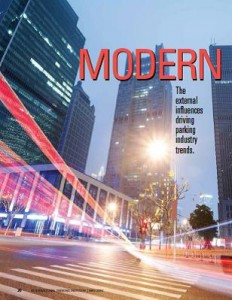 The parking industry has seen more changes in the last decade than it did in the preceding 60-plus years, since the first parking meter was installed in Oklahoma City in 1935. Fundamental shifts are underway that can be categorized into four broad categories:

These shifts are being created and shaped by broader factors in society, from urbanization to technological advances. There are various strategic tools that can be used to assess external factors driving an industry. The most popular model assesses the political, economic, social, and technological (PEST) factors that have an influence.

Urbanization
Urbanization is becoming a defining characteristic of the 21st century. Currently, more than half the global population lives in urban areas; that shoots up to 80 percent in the U.S. and Canada. From 2000 to 2010, the U.S. Census shows the urban population grew by 12.1 percent, compared to 9.7 percent for the nation overall.

Urban areas are major drivers in our economy. Globally, 80 percent of the world’s gross domestic product (GDP) is generated in urban areas and domestically, urban areas account for 87 percent of GDP (World Bank, 2013; U.S. Deptartment of Commerce, 2013, 2014). The cost of concentrated economic activity in urban areas is increasing congestion. The largest metropolitan areas are also the most congested; auto commuters spent an estimated 52 hours stuck in traffic per year in the largest urban areas, compared with 38 hours for urban areas overall (Lomax, Schrank, and Eisele, 2012). Exhibit 1 demonstrates how congestion grew in the U.S. from 1982 to 2011 in different-sized metropolitan areas.

Changing Demographics
There has been much emphasis on the effect of the millennial generation coming of age and the baby boomers retiring. Both groups have been cited as having helped drive a return to the city and the recent growth of the core cities of major metropolitan areas. The millennials, in particular, have moved to cities in record numbers, bringing with them an embrace of technology. Smart devices, constant connectivity (electronically and socially), and real-time information are hallmarks of their expectations for their lives and the services they consume. Their tech-savvy is helping to drive emphasis on these areas in society more broadly.

The aging of the baby boomer generation is also reshaping how our society meets the needs of the elderly. The sheer number of baby boomers means mobility for seniors will be a growing challenge as this generation ages.

Sustainability
Sustainability has gained ground as one of the defining issues of our society during the last 30 years. The 1987 Bruntland Commission report, Our Common Future, is considered a seminal document in raising awareness around this issue. Since its publication, the public’s embrace of this issue has brought it to the forefront in the corporate and political sectors. Environmental sustainability metrics and rating systems have grown up in response; one recent inventory found there were at least 1,400 different sustainability indicators and 900 sustainability initiatives globally (Fiksel, Eason, and Frederickson, 2012). Corporate sustainability/sustainability reporting is now a mainstream business practice, providing benefits often framed in terms of the triple bottom line: people, profit, and planet. The Global Reporting Initiative, one of the largest reporting frameworks for government and industry, currently includes almost 6,000 organizations in its database.

Pricing and Parking as Congestion Management Tools
Transportation’s political landscape has changed during the last two decades. Toll roads and congestion pricing strategies such as high-occupancy toll (HOT) roads have gained political and public acceptance. The Federal Highway Administration (FHWA) currently has tolling agreements with more than half the states in the U.S. and reports HOT lane projects in nine of those. When the concept was first introduced, HOT lanes (“Lexus lanes”) were criticized as being an environmental tax or perk for the rich who could afford to access them. Instead, experience has proven that the lanes benefit more than just the rich, and their widespread deployment suggests political acceptance.

This shift in congestion management has affected the parking industry, where pricing is now seen as a mechanism for managing curbside congestion. A seminal work in this area, Donald Shoup’s The High Cost of Free Parking, cites estimates that up to one-third of traffic in downtown New York consists of people cruising for spaces. As the urbanization of the population and economic activity continues, there is an ongoing need to make urban transportation systems function more efficiently.

Increase in Cashless Transactions
Cash transactions are increasingly uncommon as consumers switch to credit, debit, and gift cards. In 2011, approximately 66 percent of point-of-sale purchases were made via cards, compared with only 27 percent by cash and 7 percent by paper check. By 2017, predictions are that fewer than 25 percent of sales will be by cash (New, 2012).

Cellphone/Smartphone Adoption
Mobile connectivity is becoming nearly universal. Data from the Federal Communications Commission (FCC) show that of the 10 largest metropolitan areas, nearly all had at least as many cell phone lines as residents (Exhibit 2). Nationwide, the number of connected devices surpassed the total population for the first time in 2011.

The market share of smartphones surpassed standard phones in the mobile market in early 2012 (Exhibit 3). The adoption curve for smartphones is expected to continue growing. Ericsson (2012) predicts that globally, the number of operating smartphones will increase from 700 million in 2011 to 3 billion in 2017.
Big Data/Storage/

Processing Power
An ongoing trend is the capability of processing, analyzing, storing, and drawing useful information from a large quantity of data. Immense amounts of data are produced on a daily basis from devices of all types. Processing power is doubling every two years while storage cost is decreasing significantly (Exhibit 4). The result is that there is ever more data and cheaper, better computing power by which to process that data into information and knowledge to better manage systems such as parking.

Increased Connectivity
The last two decades have seen a steep upward trend in wireless technology, network coverage, connection speed, and bandwidth. Because wireless is available almost everywhere, especially in an urban environment, the factor that has most influenced parking is the growth and evolution of the machine-to-machine (M2M) market space. Wireless providers view M2M as a new vertical market with significant growth potential, in part because observed marketplace traffic is very small (with an average volume below 10 MB per subscription). So M2M devices can use reserve capacity in the wireless infrastructure.

Economies of scale are forcing M2M data plans and module costs to a level that can be used by industries such as parking. The trends show decreasing cost for M2M modules and wireless plans and increasing numbers of M2M devices in the U.S., from fewer than 10 million in 2007 to more than 50 million currently (Exhibit 5). The growth is expected to continue (Ayvazian, 2012; Cisco, 2014; Ericsson, 2012).

Recent changes in the external environment have brought nontraditional entrants to the industry that have introduced technologies that enhance the customer’s parking experience and the operating agency’s ability to deliver innovative solutions to its customers. Customers now expect parking to be smart, and as a result, parking managers are charged with connecting and actively managing their systems for a variety of outcomes.

Exhibit 6 shows how the four fundamental shifts in the parking industry were affected by the external environment (discussed under the PEST framework above). These shifts are consistent with IPI’s findings in its 2013 Emerging Trends in Parking survey.

These trends have had definite effects on parking programs across the country. A few examples:

Move Toward Networked Assets
Washington, D.C.’s percentage of networked meters increased from 20 percent in 2009 to 50 percent currently.
Anecdotal evidence based on discussions with major meter manufacturers suggests that the installed base of networked, solar-powered, and credit card-accepting single- and multi-space machines is increasing.

Pricing as a Demand Management Strategy

The four fundamental shifts have also led to other benefits, such as proactive management of parking meter assets, better system uptime, improved customer service, higher revenue, efficient enforcement, better management of curb space based on desired outcomes (turnover, availability, or occupancy), and smarter business decisions. This also has implications for sustainability. There has been increased usage of energy efficient lighting, such as light-emitting diodes (LEDs), and an increase in green building-certified garages. Installation of solar-powered parking meters reduced D.C.’s battery maintenance requirements by 40 percent between 2009 and 2013 and kept approximately 60,000 AA batteries out of landfills each year in Los Angeles.

The parking industry is at a critical juncture. The industry’s willingness to innovate in response to external changes has positioned it strategically to continue to evolve and enhance operational efficiency and value, improve customer experience, and play a critical role in the congestion, environmental, and sustainability debate that is ongoing in the greater transportation arena.

Soumya S. Dey, PE, PMP. is director of research and technology transfer for the District Department of Transportation. He can be reached at soumya.dey@dc.gov.

Stephanie Dock, AICP, is research program specialist for the District Department of Transportation. She can be reached at stephanie.dock@dc.gov.