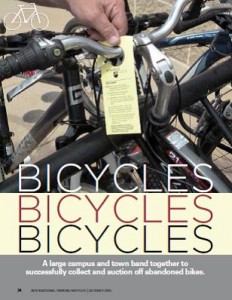 There are thousands of bicycles on the Penn State University Park campus and thousands more in the adjacent Borough of State College. In fact, walksite.com recently ranked the Centre Region (State College area) as the ninth most bicycle-friendly location in the country, with a score of 77 out of 100. Many factors are considered but sufficient modern bike racks play a big role.

It’s a fact on a lot of college campuses and their surrounding communities: Many bikes end up left behind by students. If nothing is done, the accrual of abandoned bikes over the course of a couple of years results in a lack of available legitimate bicycle parking spots. It’s funny how things always seem to get back to being a parking problem.

The Borough of State College generally auctions off more than 100 bicycles per year. Last year, Penn State gathered 317 abandoned bikes during roundup time and another 60 during the course of the year. One year, we did not do the annual roundup and had more than 600 abandoned bikes to deal with the following year. At the rate of 300-plus abandoned bicycles per year, a point is rapidly reached where there is insufficient space for legitimate use.

The problem faced by staff is differentiating bicycles that are abandoned from those that are still used. You can’t judge a bike by its appearance. Junky old bikes are frequently leaning up against the new very expensive bikes and it is the junky one that still has an owner and is currently registered.

Identifying the Abandoned
Fortunately, we have a model for dealing with this issue that works well. The university and all surrounding municipalities have a rule/ordinance that requires bikes to be registered. The Penn State Parking Office purchases the bicycle permits and coordinates the registration process. Bicycle shops in the area cooperate and assist by making sure that bikes sold have a current registration upon sale. Registration is coordinated by the Penn State Parking Office and data is housed on campus. Permits are free to anyone who applies.

Bicycles are registered for a two-year period with one series expiring every May 31. Those permits must then be replaced by another two-year permit.

Penn State can confiscate any bicycle parked on campus that is not currently registered or that is parked at an unapproved location, such as sign posts, fences, trees, etc. One particular pet peeve of mine is when a bike is parked on a handrail with the cranks and handlebars sticking through to the pedestrian way. This poses a problem not only to the general public but more severely to the visually impaired. The borough will cut the locks and confiscate bikes parked in similar locations but does not have the ability to confiscate a bike parked on private property or someone’s residence. Bicycle owners can be ticketed if their bike is removed from anything that is not intended to serve as a bike rack.

In addition to bikes collected during the year for various violations, the Spring Bicycle Roundup is held on campus after the permit expiration date. Parking enforcement staff tags all bikes on campus that do not have current permits. The tag notifies the owner (See photo on p. 34) the bicycle will be deemed abandoned. If the owner renews the registration or removes the bike between tagging and roundup it will not be confiscated. Locks and chains are cut at the owner’s expense during roundup.

Any tagged bikes that remain are considered abandoned and removed. Attempts are made to identify owners through various methods, such as looking for information from old expired permits or the serial number on the bike. Occasionally a bike that was previously reported as stolen is located. In those instances, the information and bike are turned over to university police. Bikes that are returned to their owners are required to be registered.

Auctions
Bicycles are held for a minimum of 90 days to satisfy the Pennsylvania Escheats Laws and then sold at auction if unclaimed. Penn State and the Borough of State College auction off the unclaimed bikes.

The borough holds its auction via a third party (Public Surplus), bundling three bikes of varying quality and selling them as a lot. Each lot generally fetches between $40 and $50, grossing about $1,500 per year. Funds are deposited in the borough’s general funds account.

Penn State takes a different path: Live auctions are held at Lion Surplus (the division of auxiliary and business services that disposes of university property) every spring. According to Lion Surplus staff, the spring auction generally grosses between $7,000 and $10,000. This money is used to improve the bicycle friendliness of the area through the purchase of more and better bike racks, paths, etc. There has also been some discussion of getting a bicycle advocacy group to take parts of the less attractive or functional bikes and create a usable bike, but that is still in the discussion phase.

The university sales effort is coordinated with the parking office, which has staff on hand to register each bicycle before it leaves the premises. There are also skid loads of hulks that are sold as scrap.

There is talk of holding two auctions per year, one in fall and one in spring, and some of the better bikes are now being culled from the cache and put on the Lion Surplus sales floor for sale at any time. Apparently, bicycles sold in this fashion garner a higher price than those sold at auction. However, if too many of the better bikes are put on the sales room floor, it can decrease the number of people who show up for the auctions.

Recently, the borough began a program in which some of the unclaimed bikes are used in a bike share program for staff. Borough offices are mainly concentrated in the center of town, but ordinance or zoning inspections take municipal staff to all corners of the borough. Other department staff also need to get quickly from the borough building to other borough facilities. Having a bike handy is a convenient way to travel through the municipality and informally supports employee wellness programs.

Although roundup efforts are concentrated in the spring, staff collects bicycles all year round. A pick-up truck or van is rented in the spring for the mass collection. When bicycles are collected during the rest of the year parking staff attach a bike rack to their vehicles to transport bikes to the impound area. Officers can put the rack on or off the car in a very short time.

All in all, it takes a lot of effort to create a complete bicycle program. There are many aspects to a good, friendly bicycle environment that go beyond the creation of bike racks. Dedicated bike lanes, maintenance stations, air stations, lockers, etc. all contribute to the overall bicycle friendliness of the entire community. Certainly, removing the bikes routinely dumped on campus and the surrounding community is another key part of bicycling efforts.

Doug Holmes, CAPP, is interim parking manager at the Borough of State College, Pa. He can be reached at dholmes@statecollegepa.us.