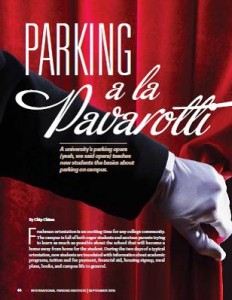 Freshman orientation is an exciting time for any college community. The campus is full of both eager students and anxious parents trying to learn as much as possible about the school that will become a home away from home for the student. During the two days of a typical orientation, new students are inundated with information about academic programs, tuition and fee payment, financial aid, housing signup, meal plans, books, and campus life in general.

Orientation at the University of West Florida in Pensacola is no different. The university has a lot of information to disseminate, and we know from experience that it is unrealistic to expect students and parents to remember everything they read and hear their first few overwhelming days. As students register for classes and get acquainted with each other, parking on campus is often the last thing on their minds. The situation creates a classic marketing challenge: how to stand out from the clutter when communicating a message.

It’s no secret that prime parking on college campuses is not abundant and, as on most campuses, the University of West Florida requires all students and employees to purchase parking permits and park in the lots designated for their specific permit classification. Parking enforcement begins the first day of class. Students need to be informed about parking, and they need to retain the information to avoid parking citations. Parking officials would rather not be the source of a negative first impression of college life—it’s not fun for them, and it’s not good for the school brand.

This year, the Office of Student Transitions challenged the UWF community to create orientation presentations that would both inform and entertain our newest community members. As shocking as it might be to parking professionals, most folks find parking to be neither interesting nor entertaining. Another challenge is always the limitation of time. Orientation schedules are tight, and not every department on campus can be given a spot on the orientation schedule.

For many years, the university parking and transportation services department only addressed the parents and not the students. The hope was that the parents would tell the students what they learned in the parking presentation, but that did not always happen. When the fall semester started, students would come to campus not knowing where to park and shortly receive citations. Something had to change.

Opportunity and Challenge
For the 2015 orientation season, the parking and transportation services department was offered a chance to address new students. We were given a few minutes at the beginning of the first day of orientation, as the parents and students arrived and before the formal presentations began. Something new and innovative was needed to capitalize on this opportunity.

Our department operates under the umbrella of the UWF Business and Auxiliary Services Department. Joy Ward, one of the marketing professionals in the department, was given the assignment to create a video for the presentation. She took a novel approach in an effort to inform and entertain and produced a music video, which captured students’ attention and communicated parking policy in a humorous, entertaining way.

Believe it or not (again), describing parking in a humorous and entertaining way is not as easy as it sounds. While parking on campus is often the subject of many jokes and punch lines, college parking itself is not an entity that lends itself to hilarity. But creative people often find creative solutions. We knew we needed something that would be effective but also memorable. Many years ago there was a series of cartoons on Saturday morning called “Schoolhouse Rock.” The producers realized music and song were powerful tools that can communicate history and facts much more effectively than a person behind a podium in a lecture hall. Several short cartoons were created with subjects ranging from math and astronomy to American history. One of the most popular of these was the “I’m Just a Bill” episode, which explained how a bill becomes a law in the United States (can you still sing it?).

Another episode was called the “Conjunction Junction,” showing how words can link together like train cars. Many years later, people can still remember the words to these songs—I bet many of you are humming them right now!
Ward decided to use the same technique and endeavored to communicate parking policy through music and song. To her, the drama that seems to occur in the parking lots of college campuses during the first week of fall semester called for nothing short of an opera.

Creative Solution
Our new video uses the tune of Verdi’s “Rigoletto,” Act II, La Donna È Mobile, with lyrics specifically written to communicate parking rules and regulations. Most incoming students are probably not opera aficionados; at first glance, using an opera from 1851 might not seem the best choice for reaching freshmen in 2015. But campus parking lots are often the scene of drama and action on a Wagnerian scale so it seemed something as forceful as an opera would work better than something in the current top 40. It would have been possible to co-opt M.C. Hammer’s “Can’t Touch This” into something like “Can’t Park There,” but then we would have had to pay royalties. She decided to go with an opera in the public domain.

Producing the video on a state university budget required the talent and expertise of several campus departments. The UWF Center for Fine and Performing Arts worked with Ward and recommended a local pianist, Darlene Reed, and a vocalist who was a recent graduate, Robert St. James. Pat Crawford, from the campus public radio station, WUWF, agreed to have his staff record the video. I provided parking props. Maera Bradberry, from business and auxiliary services, helped design the set and managed the stage while recording.

Success
The video accomplished its mission and has been complimented at numerous levels. The music in “Rigoletto” is undeniably captivating. Linking the parking rules and regulations to such a catchy tune has exceeded our expectations. Several folks have reported hearing people humming the tune around campus. An employee claims her elementary school-age niece was singing the words to the song at home.

In the video, the pianist plays as the bass vocalist dressed in a tuxedo performs a dramatic rendition of the song about parking. The tuxedo lends an air of sophistication and panache to the scene. The song begins with the basics, “Parking on school property/can be a tragedy/but all you need to do/is follow some simple rules.”

The singer uses a number of props provided by Parking Services, such as parking tickets, parking permits, parking boots, and parking signs. Cut between shots of the singer are scenes of campus parking lots and examples of parking signage. The video graphics also direct the viewer to the online e-business site, which sells the parking permits.

In previous years, our parking director would begin and end the parking presentation by directing the audience to the parking regulations. In the video, the singer explains that all parking rules and regulations are contained in a guidebook. He ends the song by singing “and just read the guide” again and again. The lyrics stick with the listener long after the presentation.

The Office of Student Transitions gave our unconventional video a thumbs up and considers it a success. By focusing on a limited number of learning outcomes and being creative, we were able to impart important information and get a chuckle in less than two minutes’ time. To view the video, search YouTube for “UWF Parking Opera.”

Chip Chism is director of University of West Florida Parking and Transportation Services. He can be reached at jchism@uwf.edu.