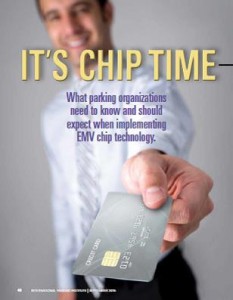 Merchants of all kinds are now fully immersed in the process of migrating to Europay MasterCard Visa (EMV) chip-based payments, and the U.S. parking industry plays a large role in that transition. In many places, customers are already used to paying for parking with credit and debit cards, whether their space is on-street or off. The sooner parking operators begin accepting chip cards, the sooner they can begin realizing the benefits of this more secure technology.

Parking operators have a choice about whether or not they will implement chip technology. Implementation does include specific costs, including hardware upgrades and staff training. The customer experience will also change, which may initially affect queuing. However, delaying chip implementation prevents parking operators from keeping pace with payment advances. Implementing chip now also helps reduce fraud liability.

U.S. Migration to Chip Technology
For decades, accepting credit and debit cards has meant swiping the card to read the static information encoded on the magnetic stripe. The U.S.’s continued reliance on magnetic stripe cards is one of the reasons we have increasingly become a target for fraud. Data stolen from magnetic stripe cards are relatively easy to use to make counterfeit cards, which are then used for fraudulent purchases.

Thanks to their processing power, the chips embedded in EMV chip cards both store information and help manage risk by protecting card-present transactions from counterfeit fraud and skimming. During a transaction, the chip generates a unique cryptogram, which is sent to and authenticated by the issuer. Data stolen from chip cards are also much less useful to fraudsters because without the actual chip, the thieves are not able to generate the dynamic data required to authenticate and complete the transaction.

Much of the rest of the world has already implemented chip for payments, and in 2011 and 2012, all of the global payment networks announced plans for U.S. migration to chip technology, in part to help reduce fraud losses. These plans include a series of incentives and policy changes for card issuers and merchants. Beginning in October 2015, the global payment networks and certain U.S. debit networks plan to implement fraud liability shifts that will affect card-present counterfeit chip card transactions and lost or stolen chip card transactions.

After October 2015, if a merchant accepts a magnetic stripe card that was counterfeited with track data copied from a chip card and the merchant has a POS terminal that is not chip-enabled, the acquirer/merchant may be liable for the fraudulent transaction. Before the shift, issuers bore the risk for counterfeit card use at physical merchant locations. If the acquirer/merchant implements the appropriate chip card acceptance devices on or before October 2015, the payment networks (American Express, Discover, MasterCard, and Visa) and the card-issuing banks will continue to assume the liability for fraudulent transactions resulting from use of their customers’ cards.

Shifting to chip cards can also increase customer confidence in the security of payments at a parking location. As consumers learn more about the advantages of chip-based payments and grow accustomed to making these payments, they may come to expect the technology wherever they use their payment cards.

Verification
Naturally, parking operators have questions about how chip card acceptance will work in the different payment scenarios prevalent in parking environments. Before we can discuss those specifics, though, it’s important to understand cardholder verification methods (CVMs). Just as with magnetic stripe cards, the possible CVMs with chip cards are signature, PIN, and no CVM (requiring neither PIN nor signature). As parking operators navigate the transition to chip, CVMs will affect both equipment choices and employee and customer behavior.

The issuer prioritizes CVMs based on the risk associated with the transaction. In high-volume, low-dollar transactions at merchants in low-risk categories—such as parking—no CVM is often preferred for transactions and, in fact, may be required by some payment networks and merchant categories. Depending on payment network rules and issuer preference, chip cards are usually configured to accommodate multiple types of CVMs to ensure acceptance at a wide variety of terminal types with different CVM requirements. U.S. chip cards will be a mix of signature-preferring cards and PIN-preferring cards. For cards without a PIN, the available CVMs are typically signature and no CVM.

Parking Payment Scenarios and EMV
Parking payment scenarios fall into two broad categories: attended and unattended. For attended in-lane payments, parking patrons pay at a cashier booth from their cars. The cashier processes the ticket and indicates the fee, and the patron pays with cash or a payment card. In this scenario, parking operators have two considerations. The first is to ensure the POS hardware accepts chip-enabled cards. These terminals are substantially similar to those used today in general retail locations, but cards are inserted into the reader and left there for the duration of the transaction rather than swiped at the beginning of the transaction.

The second consideration is whether or not to support PIN acceptance. If the transaction requires only a supporting signature or no CVM, the payment process is similar to the current process. The patron hands the cashier the card, the cashier inserts the card into the chip-enabled terminal and the transaction is processed. If, however, PIN support is desired, the PIN pad must be accessible by the parking patron, who is in a vehicle outside the cashier booth. In many cases, the logistics of this type of terminal access may require significant adjustments to or replacement of the cashier booth.

For locations where patrons pay at an attended central location, such as by walking up to a cashier booth, the transaction and terminals are consistent with those from a general retail location. With the patron on foot, countertop-type operations are viable and would be unlikely to require significant changes to the payment area beyond upgrading the terminal to accept chip cards.

Pay-on-foot devices can include both the automatic pay stations normally associated with gated parking facilities and metered payment devices. Metered payment devices include both single-space meters and multi-space meters, often referred to as pay-by-space or pay-and-display. Most pay station devices used in these scenarios currently accept credit and debit cards; those that do house magnetic stripe card readers.

Making Space
The physical attributes of a chip-enabled terminal are significantly different from those of a traditional magnetic stripe card reader. If a PIN pad is also desired, accommodating the reader and pad can be difficult, especially in situations in which the payment device itself is small and self-contained (such as an individual parking meter and many multi-space meters).

For in-lane unattended payment, drivers pay using devices in the exit lane that allow them to remain in their vehicles. A few of these devices accept both cash and payment cards, but the majority of them accept only card payments that do not require a PIN. This method of payment processing has become increasingly popular as more parking facilities, such as airports, deploy this option, offering sound customer service, reasonable labor savings, and increased patron throughput.

Chip deployment in this scenario can represent a challenge in terms of space limitations, especially if the parking operator implements a PIN pad. Hardware space is at a premium within the pay-in-lane devices. The orientation of the hardware in relation to the driver and the time required for the driver to enter a PIN are also relevant considerations.

In all of these scenarios, it’s important to remember that the chip card remains in the payment terminal throughout the transaction rather than being swiped at the beginning of it. This change is necessary because the chip interacts with the reader during the transaction instead of simply providing static information to it once, as a magnetic stripe does. As a result, transaction speeds may be affected. Just how much they will differ depends on the parking scenario and how familiar the customer is with chip transactions. The impact on speed is different for pay-on-foot transactions and pay-in-lane transactions, for example, and customers familiar with chip transactions will likely move through the process faster than those who are unfamiliar with them. As chip technology proliferates, customer familiarity is likely to become less of a factor. GoChipCard.com, the go-to resource on chip technology, is an effective way to teach your customers and employees about chip payments.

Additional considerations for parking operators for chip implementation are covered in-depth in the new white paper, “EMV and Parking,” a joint publication of the International Parking Institute (IPI) and the Smart Card Alliance. Visit parking.org/emv for more.

Now is the time for parking industry stakeholders to invest the time, and where appropriate, the funds, to prepare for the migration to chip technology. EMV chip migration requires decisions and infrastructure changes and takes time. There are also reasons unrelated to fraud that make now an opportune time for chip implementation.

Many merchants are using the chip migration as an opportunity to evaluate their payment and payment security strategies for other potential changes. With the payment card acceptance infrastructure being updated for chip, perhaps contactless and NFC functionality should also be enabled, or other security technologies such as encryption or tokenization should be implemented. Consumers are now more attuned to payment security and more prepared for payment change than ever before, so learning more now and acting sooner rather than later can benefit everyone.
Sections of this article were excerpted from the Smart Card Alliance and IPI white paper “EMV and Parking.”

Randy Vanderhoof is executive director of the Smart Card Alliance. He can be reached at rvanderhoof@smartcardalliance.org.