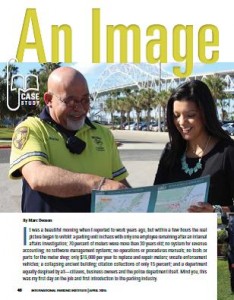 It was a beautiful morning when I reported to work years ago, but within a few hours the real picture began to unfold: a parking unit in chaos with only one employee remaining after an internal affairs investigation; 70 percent of meters were more than 30 years old; no system for revenue accounting; no software management systems; no operations or procedures manuals; no tools or parts for the meter shop; only $15,000 per year to replace and repair meters; unsafe enforcement vehicles; a collapsing ancient building; citation collections of only 15 percent; and a department equally despised by all—citizens, business owners and the police department itself. Mind you, this was my first day on the job and first introduction to the parking industry.

Imagine my first five minutes: I rode the elevator to the third floor to hear two police sergeants discussing the new “head meter maid” starting today and what kind of idiot took that job. Then one turned to me and asked, “Who are you? I haven’t seen you here before.”

“I am that idiot.”
Why would anyone want this job? Well, why not? The only way to go from that day was up! Overhauling or rebuilding the existing parking program in Corpus Christi, Texas, was not an option—we had to start from scratch. Months of industry research beginning in September 2010 yielded some interesting results. First, there really wasn’t any industry standard program. Second, it seemed while the industry was changing by leaps and bounds, people hated enforcement officers. No matter what. That was a huge problem.

So where do we start? Will Rogers once said, “Nobody likes change except a wet baby!” Oh, how true a statement. I learned in my five years as a church pastor that change was needed in everyone else’s department in the church but never in the person’s at question that moment. And that carried over to parking.

Establishing Direction
Knowing I had to win over the public, businesses owners, downtown stakeholders, and the city council (not to mention my bosses), this was going to be no easy task. For me, the only answer was to establish an ambassador-style enforcement program. This meant first defining an objective and then building a new image around it by hiring, training, and managing to that objective. Structuring parking as an objective-based program instead of one that’s revenue driven is difficult for many to grasp—we are frequently evaluated by our revenue. However, when revenue becomes the byproduct of our objective and not the objective itself, it is much easier to train and develop people with a purpose and show the public the value of what we do.

After several months of surveying business owners, citizens, business associations and organizations, the downtown management district, the convention bureau, some council members. and the mayor, we were finally able to establish an objective that would speak to all what we do: “To create a directed parking program that serves the citizens, visitors, and City of Corpus Christi!” It is simple, direct, and easy to remember.

An Image Makeover
At this point, the real work of rebuilding our image began. The term “ambassador,” first used in the 14th century, is defined as “an authorized representative or messenger.” When a team embraces the ambassador-style approach, the way its members interact with the public and each other changes drastically. Developing an ambassadorship training program with focused modules is essential and the key element to success.

Developing a program also means truly believing what you preach. I not only believe it, I eat and sleep it so much that I personally teach the first day of class. Our program includes modules in conflict resolution, customer service, standardized responses, understanding and empathizing with the violator, the importance of image, team support, and developing objective-based solutions. Enforcement vehicles are stocked with convention bureau literature, and all employees must complete the Certified Tourism Ambassador program, a national tourism and customer service program offered through various cities’ convention bureaus; I am a certified instructor for the program.
Management and leadership are simplified when all issues are managed to our objective. When an employee fails and needs to be reprimanded, we ask him or her to quote the unit’s objective, and then answer a simple question: “How did your actions represent our objective?” This limits responses and keeps the focus on the objective of ambassadorship and off the you’re-a-bad-person approach. In the same manner, we acknowledge successes with our objective. Telling someone that the way he or she handled a situation exemplifies the word “serves” in our objective is a great compliment.

We also worked on a little peace, love, and understanding. If citizens approach an enforcement officer before a citation is issued, we allow them to feed the meter to avoid a fine. We see a two-fold issue here: First, if losing $30 on a citation creates a positive interaction with a citizen, it’s worth it. Secondly, having drivers feed the meter, albeit late, helps reinforce a subconscious reaction to feed a meter when they see it, helping avoid future citations.

Taking care with our words also helps. Beginning conversations with violators by saying, “I need your help,” “Would you please move out of the loading zone, I really don’t want to write you a citation,” or “Can you do me a favor?” triggers positive reactions.

Adjudication Counts
Ambassadorship doesn’t just end with meters and enforcement but carries through to adjudication as well. In 2010, the city was still adjudicating parking citations as criminal violations. I was charged with establishing a civil hearing court and decriminalizing the process. Using the same focus as enforcement, we tackled adjudication by first replacing the word “defendant,” with “customer,” and calling what used to be a “court” a “hearing office” instead.

Again, we focused on the objective, making revenue and conviction rates a byproduct of an effective program. A key approach was this: 70 percent of our citizens’ only interaction with city government is when they get a ticket and have to pay it. What image do we want to leave them with?

Using payment kiosks instead of tellers and walk-in adjudication with no appointment needed has given us an average turnaround time of less than seven minutes. Needless to say, our customers far prefer this over the old system.
Converting to electronic ticket writers with mandatory photographs of violations and installing a 50-inch flat-screen television in the hearing office was instrumental in our approach. Customers see the images of expired meters or improper parking. Within minutes, they usually joke with us that it looks like they are at fault and ask what the fine is.

Most people immediately assumed this idea was to improve our conviction rate, but that simply wasn’t the case. Human nature is almost always to blame someone else for something we did. How many times have we heard people blame the nasty old enforcement officer for their citation, or say they were just two minutes late getting back, so it’s not their fault? By teaching enforcement officers and court personnel to understand the concept of right vs. right rather than right vs. wrong, we redirect the customer’s subconscious blame-a-meter. As silly as this may sound, it works!

Results
How has our ambassador-style approach affected our parking program? The city council allotted us an additional $300,000 in 2012-2013 to upgrade meters. Council raised meter rates 200 percent to increase the amount we had for revitalization efforts. Revenues have more than doubled as a byproduct of our objective. Collections on citations went from 15 percent to 76 percent the first year of the new court. Police Chief Floyd Simpson expanded our mission to include neighborhood enforcement of parking issues, addressing quality of life by getting rid of junked vehicles on streets, organizing parking for a cleaner neighborhood appearance, and keeping sidewalks cleared of vehicles to ensure safe passage for those with disabilities and children going down sidewalks on bicycles, skates, and skateboards. In July 2012, the police also shifted the taxi cab inspector’s office into our operation so it could take advantage of the same ambassador-style approach we applied to parking.

The most important result to me has been the respect and acknowledgement my team has received and the image we now project. Our phones ring daily with people asking to help clean up the parking issues in their neighborhoods and downtown. Meter revenue has led to a launch of “Light Up Corpus Christi,” which is a beta project to convert downtown lighting to LED to reduce the city’s carbon footprint, help reduce crime, and improve public safety.
Taking on a project like this will be a tough road and you might seem to be the only one on it. Here are three pieces of advice for those up to the challenge:

Marc Denson is operations manager for the parking control division of the Corpus Christi Police Department. He can be reached at marcusd@cctexas.com.