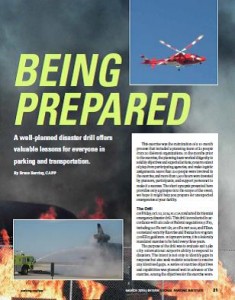 This exercise was the culmination of a 10-month process that included a planning team of 35 people from 20 different organizations. In the months prior to the exercise, the planning team worked diligently to solidify objectives and expected actions, confirm extent of play from participating agencies, and make logistic assignments. More than 250 people were involved in the exercise, and more than 1,500 hours were invested by planners, participants, and support personnel to make it a success. The short synopsis presented here provides only a glimpse into the scope of the event; we hope it might help you prepare for unexpected emergencies at your facility.

The Drill
On Friday, Oct. 10, 2014, SLCIA conducted its triennial emergency disaster drill. This drill is conducted in accordance with all Code of Federal Regulations (CFR), including 14 CFR Part 139, 49 CFR Part 1542, and FEMA Homeland Security Exercise and Evaluation Program (HSEEP) guidance. In layman’s terms, it is a federally mandated exercise to be held every three years.

The purpose of the drill was to evaluate Salt Lake City International Airport’s ability to respond to disasters. The intent is not only to identify gaps in response but also seek realistic solutions to resolve any identified gaps. A series of exercise objectives and capabilities was planned well in advance of the exercise. Among the objectives for the exercise were:

The Exercise
Scenario: The crash occurs on Oct. 10, 2014, just after noon. It is a clear day, the wind is calm, it’s a pleasant 82 degrees outside. Air traffic control tower (ATCT) personnel observe an aircraft veering off course while attempting to land on runway 34L. The aircraft’s right wing strikes the ground, and the plane begins to cartwheel. Broken into several pieces, it ultimately comes to rest outside the safety area at the north end of that runway. Smoke and flames engulf the wreckage.
Based on the exercise objectives, the exercise planning team decided to demonstrate the following capabilities during the exercise:

Initial Notification
Local air traffic control tower personnel (ATCT) notified Salt Lake City Airport Control of the crash immediately after it occurred. For clarification during the exercise, all spoken and written communication started and ended with the statement, “This is an exercise.” ATCT then activated the crash phone, which is a notification alert to aircraft rescue and fire fighting (ARFF), airport police, and airport operations.

The alert informed the first responders of the type and location of the incident and its current condition. In this case, the plane burst into flames on impact. Airport operations and police personnel arrived on the scene and found a crash site strewn across a wide area. ARFF was closely behind with multiple units to combat the fire and provide aid to the victims. Communication from the airport control center to other local agencies allowed for rapid response by local police, fire, and ambulance services.

Emergency Response
As the crisis was unfolding at the end of Runway 34L, airport staff activated the Emergency Operations Center. The event is effectively managed through an ICS structure, keeping the span of control at five to seven and utilizing all available resources through multi-agency coordination. The team members in the EOC immediately began the direction and coordination of response and recovery activities, as well as the coordination of responses from mutual aid partners. One key player in the exercise—and ultimately in a real event—is the public information officer (PIO). The delivery of accurate, timely, and single-source release of information by the PIO to the public is critical. Local television, radio, and print media were on site, all wanting statements on the response and recovery efforts.

Early responders to the scene established an incident command system support structure. The mobile command post was set up at the direction of the incident commander. Airport police set up a perimeter and logged all emergency vehicles entering and exiting the scene. The control of entry and egress points was critical for tracking and reporting vehicle locations, but it also kept any passengers from walking away from the crash site. Several were dazed and in a state of shock and easily could have wandered off.

The Hot Zone
The crash site (hot zone) was in total disarray. The fuselage was split into multiple pieces. The debris field was littered with airplane and body parts, luggage, and personal items from the passengers. First responders and rescue crews worked feverishly to assess injuries. Questions such as, “Can you walk/talk?” were asked of those who were conscious. Non-medical personnel assisted the walking wounded out of the hot zone and to secured areas. Careful accounting for each passenger helped keep an accurate and consistent passenger count.

Field triage was underway in minutes, with red, yellow, and green sections identified. Those in the red triage area were given first priority. Of the six passengers in the red triage area, four were taken to local hospitals. The remaining two were evacuated by helicopter to regional trauma centers.

Casualty collection areas were set up for those in need of transport to local hospitals (yellow triage). Those in the yellow triage area were taken to the collection point and transported via ambulance. Due to the backlog of casualties awaiting transport, the airport’s shuttle bus was dispatched to help transport victims as well. The bus was able to transport seven patients to a local hospital. Quick implementation of the shuttle bus for patient transport proved to be a valuable resource not previously implemented during an incident or exercise. From the airport’s after-action report:

The airport’s cutaway bus was dispatched to transport victims. This vehicle was able to carry seven patients. A paramedic was on the bus to monitor victims during transport, as is protocol.

—Recommendation: Good practice. This seems to be a very good use of equipment and human resources (medical). Consider adding this resource to the checklist/standard operating procedures (SOP) of deployable assets for an MCI event or incident.

Airport shuttle buses are mobilized during certain alerts at SLCIA, generally if it is deemed that an aircraft evacuation may be required. This was the first time a shuttle bus was used in a medical support capacity for an exercise. It proved to be very successful, and will be included in the SOP for implementation in future events.

Observations
In this mass-casualty disaster, there are many unexpected events that occur. The planning team attempted to replicate the unexpected and installed a few last-minute glitches to the script:

Attempts to justify the passenger count were a challenge due to conflicting information received from multiple sources. Perseverance by incident command personnel and the airline allowed the passenger count to be 100 percent verified. It was discovered that there were two babes in arms who were not accounted for in the passenger reconciliation.

—Recommendation: Verification of the passenger manifest against passengers recovered should be done as early in the rescue process as possible. Clarify “babes in arms” recording on manifests with airlines.

There was a Transportation Security Administration (TSA) K9 handler on board the aircraft involved in the incident. Although the canine was unharmed, the TSA handler was sent to red triage for immediate care. The canine needed to be secured and held at the airport’s K9 facility until DHS K9 or animal services could take custody of the animal.

—Recommendation: The handling of family pets and service animals in a disaster situation needs to be included in the preparation and training for these events.
The potential for contamination with various materials is a high probability. Decontamination of personnel and equipment becomes necessary.

—Recommendation: Consider adding a decontamination element to every full-scale exercise and event. At a minimum, it should contain gowns, towels, bio-waste bags, gloves, blankets, and other items deemed necessary by hazmat and ARFF personnel.
After the exercise has been deemed complete by the exercise director, analysis and critique are critical and a key component of the exercise.

Hot Wash and After-Action Report
Immediately after the completion of the exercise, a hot wash (roundtable discussion) was held by the exercise controllers to facilitate player feedback about the exercise and their own performance.

The after-action report (AAR) is the culmination of the SLCIA full-scale exercise. It is a written report outlining the strengths and areas for improvement identified during the exercise. It also includes the executive summary and a timeline for the implementation plan.

Terry Craven, CEM, FEP, exercise director and emergency/continuity programs manager for SLCIA, said, “Our full-scale exercise held on Oct. 10th, 2014, was a resounding success. We learned some valuable lessons and have developed an improvement plan to fill the gaps identified.” He continued, “These exercises are not just a checkmark in a box to fulfill a federal requirement. They are a golden opportunity to practice with all of the responders, agencies, companies and others who would be involved during a real event. The willingness of the entire Salt Lake Valley’s response agencies to consistently support our triennial exercises exemplifies their dedication to life safety and their recognition of the value in getting to know the people who will have your back when the situation turns critical.”

Bruce Barclay, CAPP, is operations manager, parking, at the Salt Lake City Department of Airports. He can be reached at bruce.barclay@slcgov.com or 801.575.2530.