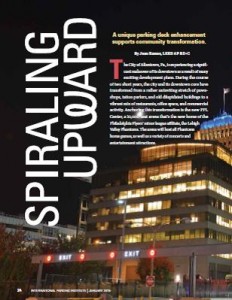 The City of Allentown, Pa., is experiencing a significant makeover of its downtown as a result of many exciting development plans. During the course of two short years, the city and its downtown core have transformed from a rather uninviting stretch of pawnshops, tattoo parlors, and old dilapidated buildings to a vibrant mix of restaurants, office space, and commercial activity. Anchoring this transformation is the new PPL Center, a 10,000-seat arena that’s the new home of the Philadelphia Flyers’ minor league affiliate, the Lehigh Valley Phantoms. The arena will host all Phantoms home games, as well as a variety of concerts and entertainment attractions.

The redevelopment of Pennsylvania’s third-largest city will continue to serve as an important economic boon for Allentown and surrounding areas. But perhaps more important is the example that it offers to inspire similar efforts in other struggling, post-industrial cities throughout the country.

While there are still a number of projects planned for the continued redevelopment of Allentown, one of the most important considerations was, of course, parking. Currently, design is underway to add an approximately 1,000-space parking facility near the PPL Center sports arena site to help significantly alleviate the parking needs of the current and future downtown development. The Community Lot parking facility will include design elements to accommodate future retail and residential space, which will serve as an inviting destination for residents and visitors of the area while helping generate street-level activity.

Because the PPL Center was scheduled to open in the fall of 2014, city officials needed to make plans to accommodate growing parking needs as soon as possible while also utilizing already-existing parking resources. Thus began plans for the renovation of the Hess Deck parking facility.

The Pedestrian Experience
One of the most important enhancements required for this project was the pedestrian traffic flow from the garage to the PPL Center. This was not only important to create a more safe and convenient experience for users, but would also become an important ingress and egress issue during events with large crowds. Getting people to and from the PPL Center in a quick and convenient manner would reduce pedestrian and vehicular conflicts, create a more pleasant overall experience, and encourage people to return in the future.

The existing parking facility featured a tunnel beneath the structure that was open to both vehicular and pedestrian traffic and served as a drop-off area for students of a Montessori school. While the tunnel provided numerous benefits for improving pedestrian and vehicular traffic, it was dark, uninviting, and built at a vehicular scale, creating an unpleasant and unsafe perception for users.

The project team and the city worked together to identify opportunities to create a better feeling and perception of the Lumber Street tunnel. Improvements included painting the walls, adding multiple LED light fixtures, and installing metal panels on the ceiling to create a more pedestrian-friendly scale. The walkway can be seen as a continuation of the pedestrian corridor created with the existing Robert Stern Plaza, which links Linden Street and Hamilton Street.

Enhancing Common Spaces
Another important transformation of the pedestrian experience was the considerable decrease in walking distances for patrons from the parking facility to the multiple downtown destinations. Two elevators were located on the west side of the building and the lobby opened up toward Ninth Street. This required patrons to walk the entire distance around the parking facility.

To alleviate this issue, the design team proposed cutting through an existing loading dock and providing a ramp that opens to the Lumber Street tunnel. This modification alone reduced walking distances from approximately 934 feet to 293 feet, through a well-lit, and covered area, helping dramatically improve the user experience immediately upon arrival.

The challenge this presented was that pedestrians would exit the lobby directly onto an active street. The solution was to create a raised crosswalk and open the south façade of the corridor with a curtain-wall. This helped with passive security, allowed pedestrians and drivers to see each other, and established a safe crosswalk that substantially improved pedestrian safety because drivers intuitively avoid parking on it when queuing up to pick up and drop off children at the school.

In 2005, several renovations were made to the garage by a local firm, including enhancements to a pedestrian corridor opening up to Ninth Street and a one-stop elevator that allowed parkers on the second tier to have very convenient access to the PPL Office building.

While the location of this second elevator tower was actually more convenient to serving the new development taking place in the city, the elevator only travelled up to the second level of the garage. To create a better user experience and assist with pedestrian ingress and egress, the project included the demolition of the existing elevator and the addition of a new elevator.

Branding and Wayfinding
The Parking Authority wanted to upgrade the branding and wayfinding system within and around the parking facility to create a more clear and effective messaging system for its patrons. First and foremost, the city took the opportunity to officially adopt the “Spiral Deck” name. This was easy to do, as the structure had long been known by this name in the community thanks to its iconic concrete ramp.

The long walls of the corridors were used as backdrops for large stenciled wall graphics that help fill these spaces with color and direct pedestrians to their various destinations. The new signage system also included changing the level designations from letters to numbers, which has helped garage users while improving the experience for garage staff performing maintenance and other work within the facility.

The design team also worked with the Montessori school to create new signage for them. This not only gave the school a more modern look but also enriched the aesthetic view of the ground level of the garage for students and passersby.

Design Elements
The design approach was to work with the beautiful shapes from the original Brutalist Building and to try to incorporate features from the previous renovations so the building as a whole had a cohesive look to it, all the while focusing on the most important issue of all—improving the user experience and having a positive effect on the community.

Local Allentown firm the Architectural Studio had a very thoughtful approach to its design. The materials were elegant and worked very well to complement the building. Steel beams were integrated to accent the elevator lobbies and vehicular entry/exits. A steel bent plate wraps around the top-tier lobby and turns downward, framing the new elevator tower. The same patterns and proportions cast in concrete were implemented to the metal panels.

The sloped shapes for the signage and the metal ceiling panels were continuations of the slopes of the concrete beams running perpendicular to Linden Street.

The already-iconic spiral feature of the facility provided a valuable opportunity not to enhance, but celebrate the façade of the structure. Design team member West Side Hammer came up with a great solution to use light to “paint” the spiral. This offers the opportunity to change the look of the garage throughout the year to promote a variety of events and milestones, such as orange during Phantoms games, pink during breast cancer awareness month, and much more.

An existing concrete plaza was enhanced with grass pavers, flowering ornamental trees, elegant lighting and benches that also serve as bike racks. This area became a foreground for the spiral and a great space for people to meet before attending an event.

The redevelopment of the Allentown commercial district has helped to transform the city into a more vibrant and attractive community, while significantly increasing its economic viability and potential. The current and planned addition of entertainment destinations, restaurants, and residential and commercial developments will no doubt continue to rejuvenate the city, and will serve as a catalyst for further improvement and revitalization of surrounding communities.

The growth and energy we see in this city reflects the personalities of its inhabitants. From the parking authority employees and city officials to the construction team of Boyle Construction and CMG, the entire team worked tirelessly to ensure that the project came together. Each team member understood the importance of improving the quality of life for the people who park in the area every day, as well as the visitors to the PPL Center.

Juan Ramos, LEED AP BD+C, is project designer for Timothy Haahs & Associates, Inc. He can be reached at jramos@timhaahs.com.