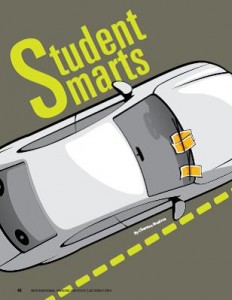 As is true on college campuses across the nation, parking has been and continues to be a big issue among students at Central Michigan University (CMU). With limited parking and a large student population, problems are expected to arise. Student Government Association (SGA) President Chuck Mahone says parking is one of the frustrations of being a student because of CMU’s sizable off-campus population.

“Parking is an issue because, of course, everyone wants to park where they want to park,” Mahone says. “We do have parking spots on campus in areas that people are not going to like, so eventually [drivers] get frustrated.”

When he ran for president of the SGA, the college senior listened to students’ perspectives on issues they’d like fixed. One of the major topics SGA hears a lot about is student parking.

In the past, SGA struggled to find a way to help students with parking issues, but there was only so much to do. Mahone decided he wanted to formulate an idea that would benefit students facing issues from tickets being blown off by wind or snow to late fees for tickets they never even saw.

“Some students would actually steal tickets from other students’ cars and put the ticket the other student got on their car,” Mahone says. “That way, when parking services came around, they wouldn’t give them a ticket, and the car that got the ticket was ticketed again. The first driver would also get a late fee on a ticket they didn’t even know they had.”

Those kinds of issues prompted Mahone to come up with an idea to take action. He has only received one parking ticket but says he thinks twice about wherever he’s parking because of CMU’s parking situation.

The Idea
Mahone met with a group of students who had similar problems when it came to receiving parking tickets. After hearing their discussion, he thought of potential solutions.

A big hurdle was trying to figure out how to approach the problem. He crossed potential solution after potential solution off his list before coming up with an idea that seemed logical and the most appealing choice for everyone involved.

“I was thinking how could we on the students’ end alleviate some of the parking issues such as, ‘I didn’t know I couldn’t park here,’ or ‘I didn’t know I had a ticket,’” Mahone says. “So, I was thinking something that would be very simple is if we knew when we did receive the ticket. That way, we would know when we’re in violation and we wouldn’t receive multiple tickets.”

The issues of parking may have been nothing new to SGA, but Mahone’s initiative was. Mahone thought the easiest solution would be for CMU’s parking services to send an email to ticketed students to let them know they received a ticket, where their car was, why it was in violation, and the fine amount.

Mahone knew parking services already had students’ email addresses in parking permit records, and the solution seemed like a no-brainer. He thought email notification of tickets would work well because students had the option to opt out from the email. After polishing up his plan, Mahone sat down with CMU Police Department Chief Bill
Yeagley to talk about the email initiative.

Cooperation
Yeagley says Mahone thought there might have been a good percentage of times people got multiple tickets on their vehicles.

“When he said that, I wondered, ‘How accurate is that?’” Yeagley says. “What are the numbers we’re looking at where that could occur? I didn’t know technologically if we could make this work or not, but when he said if we simply notify those folks when they get the ticket with the university’s email, that could take away any likelihood that they weren’t aware they were parked in the wrong spot. I found that to be a great idea.”

Yeagley put Mahone in touch with the right people at parking services who could put his plan into action. Mahone says the department was very receptive and agreed this was something it could do.

“I didn’t know the logistics of the system, but they said this is something they would have to implement,” Mahone says. “It did take time—a semester or so—to get everything worked out. They tried it out at the end of the year, and it worked successfully.”

Throughout the trial and experience, Mahone says he immediately got positive responses and emails from “congratulations” to “thank you.”

“I have heard from people who got emails after their tickets saying, ‘Whoa, it actually works. I’m glad it does what it say it does and it’s not messed up,’”
Mahone says. “So that credits parking services and the quality work they do.”

Mahone says the only negative thing he’s seen was a person’s comment in the university’s newspaper that was a good idea but won’t matter or help.

“I can understand if you’re pessimistic about it, but I personally think it will help,” Mahone says. “The system isn’t going to stop students from parking illegally, but it will let them know so they won’t get fined or another ticket or their car towed.”

The System at Work
Sophomore Anthony Cavataio says the new plan will benefit students and parking services. Cavataio says he checks his email five or six times a day and thought it was clever to have an email sent after receiving a ticket.

The email notification system from CMU Parking Services was put into action at the start of the fall 2014 semester. This implementation marks an early accomplishment for Mahone even before his SGA presidential career began. Mahone was still a candidate running for president when he came up with the idea and presented it in front of officials. Now, as president, Mahone has already crossed this goal off his master plan of positive change.

Mahone says he hopes the new system will help students manage their money while they learn from their experiences out in the parking lots.

“I hope it helps students financially,” Mahone says. “That’s kind of one of the biggest points of the system, for students not to get late fees or get another ticket … because the wind blew it off or it blew into the snow or someone took it. Then, they’ll know they definitely should not park there next time.”

Cavataio admits he received between 12 and 15 tickets during his freshman year on campus because he did not know the rules or what signs meant when it came to student parking.

“I would often forget about the tickets I did have, or I would get more than one at the time that I would have to pay,” Cavataio says. “So I think this would be a helpful reminder. I wish I had that during my freshman year.”

Mahone offers advice to other students looking to make similar changes on their campuses. “Before I came to Chief Yeagley, I definitely looked at different avenues,” he says. “I looked at things that would be buyable, and I definitely crossed a lot of things off the list until I came up with the system. So do your research and know what you’re saying before you go to the correct people. Also, have the courage to go to the correct people. Don’t think that it’s all going to fail. If you do fail, don’t look at it as failure. Look at it as you just found another way to not do it right and try again.”

Charnae Sanders is a junior online journalism student at Central Michigan University. She can be reached at charnae.sanders@gcmag.org.