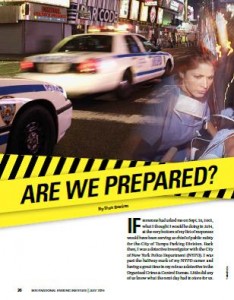 If someone had asked me on Sept. 10, 2001, what I thought I would be doing in 2014, at the very bottom of my list of responses would have been serving as chief of public safety for the City of Tampa Parking Division. Back then, I was a detective investigator with the City of New York Police Department (NYPD). I was past the halfway mark of my NYPD career and having a great time in my role as a detective in the Organized Crime & Control Bureau. Little did any of us know what the next day had in store for us.

On Sept. 11, 2001, I was a first responder at the World Trade Center site in New York. What happened there that beautiful Tuesday morning was true evil, and no one’s eyes should ever have to see the results of the malicious deed that took place. Graphic details are not important; we have all seen the news footage. My NYPD career path curved that day, as I received an injury that would eventually lead to the end of the job I so loved.

After the area now known as Ground Zero and the landfill on Staten Island were thoroughly searched for evidence and remains, the post-disaster education of the NYPD began. We studied events of terrorism from around the world and learned how to prevent future attacks. Most of this training was very detailed and full of information.

After leaving the NYPD, I found myself part of the parking industry. Not long after making my career switch, I realized there are steps my new industry could take to lessen our levels of vulnerability to a terrorist attack.

Parking as Target
Let’s take a moment to discuss why our locations could end up as targets:

The first terrorist attack on the World Trade Center in 1993 was carried out by placing a bomb-filled vehicle in the underground parking garage of the targeted tower. The destruction was massive, but the building held firm and casualties were minimal for such a large, enclosed bombing.

Strategies
One of the focal points of the training I received with the police department was planning for not if, but when, a large-scale attack happens again. Terrorists (domestic and foreign), anarchists, and other groups with radical agendas are out there and are not going away. This is why our diligence must always be running at 100 percent. Here a few parking-specific ideas we can implement to give us an edge:

How We Do It
Here in the City of Tampa, we have taken a proactive approach with our public safety team. We have installed cameras throughout our facilities, and all of our public safety officers have the tools they need to effectively do their jobs, including intensive training from the Tampa Police Department and others we’ve brought in for teaching events.

Our officers have been empowered to make decisions in the field and implement the skills they have learned in our training programs. We have built a good relationship with the Tampa Police Department and our officers have direct radio communication with their officers. This allows for immediate transmittal of observed criminal activity and increased response times.

While no plan is foolproof, vigilance can give us the edge. The one asset we have that is vital to a successful security plan is our frontline employees. They are out there in the trenches day in and out. Ask for their feedback and input. Let them know they can speak up if something is just not right. They know our facilities better than anyone. They will be the first individuals to see that strange package sitting alone; they will notice things that were not there the previous day. Encourage them to report these out-of-place observations no matter how insignificant they appear.

The goal here is not to create an environment of paranoia. It is to remember to implement all the knowledge we have gained in preventing future attacks. We also must keep up with new technology as it is developed. We owe all who patronize and work at our facilities the safest possible environment. This can only be done by keeping in mind that we are in a post-Sept. 11 world and we must never get lax in our prudence to prevent future attacks.

Combating terrorism is a combined effort of many. It’s imperative that we all jump on the team. I was there Sept. 11—I know the reality of what can happen. I hope you’ll never forget.