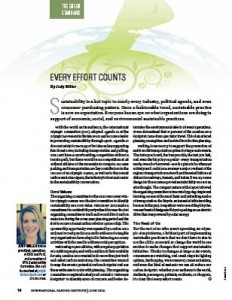 Sustainability is a hot topic in nearly every industry, political agenda, and even consumer purchasing pattern. Once a fashionable trend, sustainable practice is now an expectation. Everyone has an eye on what organizations are doing in support of economic, social, and environmental sustainable practices.

With the world as its audience, the International Olympic Committee (IOC) adopted Agenda 21 of the Olympic Movement in the late 1990s and became a leader in promoting sustainability through sport. Agenda 21 does not solely focus on sport but also on key supporting functional areas, including transportation and parking. You can’t have a snowboarding competition without a terrain park, but there would be no competition at all without athletes at the mountain to compete. Because parking and transportation are key contributors to the success of an Olympic Games, as well as to the overall carbon emissions figure, the industry is front and center in the sustainability conversation.

Core Values
The Organizing Committee for the 2010 Vancouver Winter Olympic Games was the first committee to identify sustainability as a core value. Vancouver 2010 made a commitment to sustainability early when it became the first organizing committee to track and record direct carbon emissions during the seven-year planning period and the first to secure a formal carbon offsetter sponsorship. This sponsorship opportunity was repeated by London 2012 and, most recently, Sochi 2014 and is evidence of a tangible way organizations have adapted to balancing necessary activities with the need to address social perceptions.

Welcoming 10,568 athletes, with a regular population of 8 million people, and with 8 million tickets available for sale, London 2012 wanted to do more than just track and offset carbon emissions; the committee wanted to map the event’s potential carbon footprint and use those estimates to assist with planning. The Organizing Committee completed a study and created a “reference footprint” to identify areas of concern and better determine the environmental effects of event operations. It was determined that 17 percent of the London 2012 footprint came from spectator travel. This data altered planning assumptions and assisted in reduction planning.

Parking is necessary to support the promotion of multi-modal transportation options for large-scale events. The train you board, the bus you ride, the taxi you hail, and even the bicycle you pedal—every transportation mode, owned or borrowed—needs a place to be when not actively used. Sochi 2014 oversaw a major overhaul of the region’s transportation network and invested billions of dollars in roadways, tunnels, and trains. Even so, venue design for those Games proved sustainability was not an afterthought. The compact nature of the layout allowed the organizing committee to innovate by going simple and focusing on one of the most basic and refreshing modes of transportation: the bicycle. So instead of athletes riding buses as in the past, competitors were seen riding bicycles. Venues boasted designated bicycle parking on an electric drive that was powered by solar energy.

The Rest of Us
For the rest of us who aren’t operating on Olympic-size platforms, a brilliant part of implementing sustainable practices is that we don’t have to aim to ace the LEED scorecard or change the world in one motion to make changes that support sustainable initiatives. Thanks to changes at large-scale events, consumers are watching, and small steps in lighting options, landscaping, waste removal, communications, and even the kind of sealants we use all reduce our carbon footprint. Whether your audience is the world, students, passengers, patients, residents, or shoppers, it’s clear that every effort counts.

Jody Miller is vice president, operations, of Click and Park, and a member of IPI’s Sustainability Committee. She can be reached at jody@clickandpark.com or 321.251.9144.