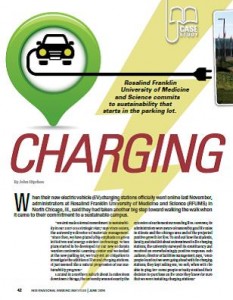 When their new electric vehicle (EV) charging stations officially went online last November, administrators at Rosalind Franklin University of Medicine and Science (RFUMS) in North Chicago, Ill., said they had taken another big step toward walking the walk when it came to their commitment to a sustainable campus.

“We first made a formal commitment to sustainability in our 2007-2011 Strategic Plan,” says Vince Butera, the university’s director of materials management. “Since then, we have placed a big emphasis on green initiatives and energy-efficient technology. When plans started to be developed for our new Rothstein Warden Centennial Learning Center and we looked at the new parking lot, we truly felt an obligation to investigate the addition of EVs and charging stations. It just seemed like a natural progression of our sustainability program.”

Located in a northern suburb about 35 miles from downtown Chicago, the university was not exactly the epicenter of excitement surrounding EVs. However, its administrators were aware of reasonably good EV sales in Illinois and the Chicago area and of the projected positive growth for EVs. To find out how the students, faculty, and staff felt about an investment in EV charging stations, the university surveyed its constituency and received an overwhelmingly positive response. Bob Jackson, director of facilities management, says, “Once people found out we were going ahead with the charging stations, they kept asking me, ‘So Bob, when will I be able to plug in?’ Some people actually finalized their decision to purchase an EV once they knew for sure that we were installing charging stations.”

Picking the Right Equipment
As the university embarked on a study of EVs and charging stations, it quickly learned there were many options and that the emerging market was still sorting itself out. To gain understanding of the nuances, RFUMS connected with Telefonix Inc. in the neighboring city of Waukegan; the company recently expanded its line of electronic equipment to include EV charging stations.

It took several meetings for the university team to properly address all of these concerns. “We wanted to make good decisions up front that would work well for a long time,” says Jackson.

Level 1 vs. Level 2
Because Level 3 charging brings a battery to 80 percent charge in as little as 20 minutes and comes with a rather high price tag (typically more than $25,000 per unit), the decision for most commercial facilities boils down to Level 1 or Level 2. When the facility management team at RFUMS delved into this discussion, they found the answer was related to how long vehicles would be parked on their campus. Their research showed that the typical owner of a plug-in vehicle leaves home every day with a fully charged battery and commutes fewer than 20 miles each direction. In fact, the U.S. Department of Transportation reports that 93 percent of all daily commutes are 35 miles or less.

Administrators concluded that because most vehicles are parked on-campus for at least half the day, it made the most sense to install commercial-grade Level 1 charging stations. Even at 120 volts and only 12 amps of current, EVs recoup about five miles of range for every hour of Level 1 charging. If a vehicle’s on-board charger will allow charging at higher Level 1 power levels, then as much as seven or eight miles of range can be gained per hour of charging.

The electricity rates large facilities pay are often determined by the highest amount of energy they use at any given time during the day—called the peak energy demand. At manufacturing facilities, for example, where the peak demand is in the morning when equipment is started up, a large number of EVs plugging into high-current charging stations could be enough to move that facility into a higher electricity rate.

The primary concern for RFUMS was taxing the grid and potentially costly upgrades that might go along with a decision to use higher current, Level 2 charging.

To Pay or Not to Pay
After agreeing that Level 1 charging was the right choice for RFUMS, the management team next addressed questions about restricting access and charging fees to recover the cost of energy. To answer those questions, the team calculated the exact costs that would be incurred from EV charging. “The math is really simple and we realized that the energy costs were surprisingly low,” says Jackson.

In the area where the university is located, electricity rates for facilities their size range from $0.075/kWh to $0.12/kWh. Looking at the worst-case scenario of a vehicle charging at the maximum power level of 1.92 kW (16 amps x 120 volts) and paying the high-end of the electric rate at $0.12/kWh, the energy cost for four hours of charging is 92 cents:

Understanding that the actual charging rate would be closer to 1.44 kW (vehicles typically draw about 12 amps on Level 1 charging) the university realized that the per-vehicle cost for charging would rarely exceed $1.

“The actual cost of the energy was so low that it just didn’t justify any of the costs associated with the collection of fees or the accounting that would go with that,” says Jackson. The end result was a decision to allow free charging for plug-in vehicles on campus.

Vehicle Compatibility
With the decision to invest in EV charging finalized, the university wanted to be sure its equipment would charge all the different models of plug-in vehicles. They learned that the Society of Automotive Engineers (SAE) established and published a recommended practice under the title J1772. Almost all U.S. manufacturers of EVs, as well as manufacturers of charging stations, follow the standards and practices in J1772. Only the Tesla, at the high end of the EV market, uses a different coupler/connector configuration, but all Teslas come with an adapter that allows them to use a J1772 charging station.

The end result of this investigation was a decision by the university to purchase J1772-compliant EV charging stations. J1772 compliancy ensures that charging stations will work with all current plug-in vehicles.

Safety
“The thought of cords lying on the ground and people possibly tripping on them was a big concern for us,” says Jackson. “But fortunately, Telefonix Inc. had a robust cord reel in their charging stations that seemed to be designed for this exact application, and they were only about 10 minutes away.”

Telefonix realized about two years ago there was a need for retracting cables in EV charging stations. After designing a cord reel for Level 2 charging with expectations of selling that cord reel to manufacturers of charging stations, they learned there was a bigger need for commercial Level 1 charging. The team at RFUMS decided that was the right equipment for the campus. They also took advantage of the option to customize the units with the university’s name and logo.

Government Incentives
RFUMS extended its budget by taking advantage of a rebate program offered by the Illinois Department of Commerce and Economic Opportunity. The program offers rebates up to 50 percent of the installed cost of qualifying EV charging stations.

“I couldn’t believe that the people at the State of Illinois were so easy to work with,” says Butera. “The form was easy to complete, and we already received our rebate check.” Because the Illinois program is ongoing, the university is considering the installation of more EV charging stations later this year.

The big question: At the end of the day, would the university follow the same path again? Jackson says yes. “We know that we’ll have to,” he explains. “But I do believe we’ve made it easier on ourselves going forward. Everyone I talk to who owns an electric car seems to love it. So I think charging stations are something that we’ll be dealing with for a long time.”

John Hipchen is presdent of Excel Consulting Group. He can be reached at johnh@excelconsultinggroup.com or 847.912.1219.