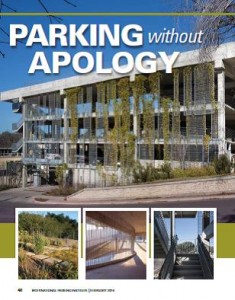 Parking in central Austin, Texas, is at a premium. Faced with the challenge of locating a much-needed garage along a leafy boulevard adjacent to a residential neighborhood and across from a large park, we at Danze Blood Architects sought to create a structure that would be functional, unapologetic, and aspirational.

We both attended the Yale School of Architecture and were strongly influenced by Paul Rudolph’s Art and Architecture Building and his Temple Street parking garage in New Haven, Conn.; they were built between 1959 and 1963. Famous for his rigorous use of concrete and strong formal expression, Rudolph’s work is also tempered with a complex and refined sense of human scale. Ultimately, his architecture is embodied with a rich sense of character.

Prior to the completion of the parking structure, we had extensively renovated the interior of a 30,000-square-foot building as part of an effort to consolidate the corporate headquarters of T3, an integrated advertising and marketing firm. In renovating the building, which was built in 1952 and originally served as the central office of the Texas Medical Association, we sought to create an open, unified interior that would be conducive to imaginative teamwork and that capitalized on the building’s original character. An advertising and marketing firm’s animated and lively business model served as a counterpoint to the original building’s stately, if somewhat austere presence.

Parking requirements for the renovated building were grandfathered, and T3 required additional parking to meet the physical demands of the successful and growing firm. To accommodate a new parking garage, the company acquired a small adjacent lot located on a steep hillside that abutted an established residential neighborhood on the uphill side.

Design Goals
From the outset, the client and design team sought to create a structure that would work efficiently and with unapologetic formal expression using a compelling sequence of circulation, light, space, and a strong connection to nature. The strict limitations of the garage’s constrained, sloping site also required an efficient layout. To address this, the design uses a simple and economical configuration whose formal language is both functional and expressive.

A continuous helical floor plate that responds to the turning radius of the automobile provides a structure that functions as both parking surface and circulation ramp. Organized around a central light well that’s defined by vertical cables, the continuously-sloping ramped surface can accommodate 100 parking spaces. Creating an ellipse at the center of the structure, the cables not only mark the spiraling vehicular path, but also provide transparency throughout the structure, which is useful both for security and orientation.

Additional constraints of the project that were dictated by its site were the City of Austin’s stringent impervious cover limitations and water detention requirements. Rather than dedicate a large portion of the limited available land to satisfy these requirements, the structure instead responds artfully by integrating a planted green roof on the top of the garage. The green roof connects to a sustainably-designed water harvesting system and keeps the garage within the city’s impervious cover limitations. The rooftop tray and water collection tank celebrate their functions as prominent design characteristics with positive environmental and social effects.

One hundred percent of precipitation is managed on-site with regard to slowing water runoff: peak discharge has not increased beyond what was occurring before development. All water collected from the roof enters a large cistern that is clearly articulated and highly visible at the structure’s high-traffic southeast corner. The collected water is used to irrigate the roof and surrounding landscaping, reducing requirements for extra water for irrigation Additionally, the remaining area of the site that is landscaped is planted largely with xeriscape species (plants that require very little water to thrive) to further reduce the need to water, which is expected to be on the order of only 16 gallons per square foot per year.

Approximately 4,000 square feet of space were planted, translating to a total water requirement of 64,000 gallons per year. If natural rainfall comes in the right distribution, it’s possible that all of the structure’s water needs can be met by the rainwater collection tank. The rooftop planting has positive implications for the structure’s neighbors as well, mitigating and softening the view for uphill residences and providing a potential habitat for birds and other wildlife.

Green Walls
The artful use of vegetation on the vertical surfaces also simultaneously expresses the structure’s presence and helps it blend into the existing natural landscape on the hillside. While leaving the concrete structure exposed and expressed, a series of rhythmically-­overlapping screens serve as the framework for a veil of native plants that cools breezes and tempers the harsh Texas sunlight. The permeability of the metal screen panels contrasts the mass of the concrete structure visually. It also allows daylight and breezes to flow through the entire building freely, and provides transparency that promotes security on all floors; both benefits are key functions for the building’s success. The vines trained onto the screens provide living green walls that allow the building to recede further into the hillside, diffusing the edge between the building and its site. The functional and aesthetic characteristics of the metal mesh/screens both harmonize with and accentuate the concrete structure, transforming a potentially uninteresting building into a bold and honest expression.

To further enhance the building’s function and underscore its contribution to the urban fabric, allowance was made within the structure to accommodate the future addition of an elevator. This would provide ADA access to the roof deck area, allowing it to be used for company events or other functions, with the panoramic view of the Austin skyline serving as an enchanting backdrop. Built of nothing more than concrete, steel, and foliage, the elegant and unapologetic parking structure takes on the creative energy of its users, finding opportunities within the simplest of forms to inspire and uplift an otherwise commonplace daily activity.

John P. Blood, AIA, is principal with Danze Blood Architects. He can be reached at john@danzeblood.com.

Elizabeth Danze, AIA, is principal with Danze Blood Architects. She can be reached at elizabeth@danzeblood.com.