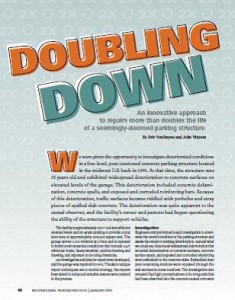 By Eric VanDuyne and John Vincent

We were given the opportunity to investigate deteriorated conditions in a five-level, post-tensioned concrete parking structure located in the midwest U.S. back in 1991. At that time, the structure was 15 years old and exhibited widespread deterioration to concrete surfaces on elevated levels of the garage. This deterioration included concrete delamination, concrete spalls, and exposed and corroded reinforcing bars. Because of this deterioration, traffic surfaces became riddled with potholes and stray pieces of spalled slab concrete. The deterioration was quite apparent to the casual observer, and the facility’s owner and patrons had begun questioning the ability of the structure to support vehicles.

The facility is approximately 270 × 263 feet with five elevated levels and on-grade parking to provide a total floor area of approximately 408,000 square feet. The garage serves 1,100 vehicles at a time and is exposed to harsh environmental conditions that include 24/7 vehicular traffic, heavy snowfall, cyclical freezing and thawing, and exposure to de-icing chemicals.
An investigation and plan for repair were developed, and the garage was repaired in 1992. Thanks to unique repair techniques and a careful strategy, the repairs have lasted to today and valuable lessons were learned in the process.

Investigation
Engineers first performed a field investigation to determine the overall condition of the parking structure and assess the extent of existing deterioration. Beyond what we could see, they found widespread deterioration that included delamination of concrete surfaces, concrete surface spalls, and exposed and corroded reinforcing steel embedded in the concrete slabs. Embedded steel post-tensioning tendons were exposed through the slab surfaces in some locations. The investigation also revealed that high concentrations of de-icing salts that had been absorbed into the concrete caused corrosion of the structure’s embedded reinforcing steel. Approximately 20 percent of the structure’s deck-top surfaces exhibited deterioration.

Prior to our involvement in 1991, the structure underwent at least one unsuccessful repair program. These repairs consisted of the localized removal of deteriorated concrete followed by the installation of various types of patch materials. Virtually all of the patches exhibited deterioration by the time we began our study, and many had dislodged from the substrate concrete.

Approximately 10 percent of the post-tensioning tendons embedded in the concrete were inspected during the investigation to assess their actual conditions. Inspections were performed by removing concrete in localized regions to expose tendons. Visual inspections and tests to evaluate prestressing in tendons were performed. Results of this work revealed minor corrosion of prestressing tendons and two slab tendons that had lost their prestressing forces. The post-tensioning system was judged to be in relatively good condition overall, but exhibited localized deterioration.

Repair Design
Prior to our involvement, the garage’s owner considered demolishing the structure and building a new one. However, the field investigation, engineering analyses, and laboratory testing suggested that repairs were feasible and that the life of the structure could be extended for at least several more years. At a minimum, the owner desired that the structure be kept functional for a few years so funds could be secured to build a new garage.

Specific repairs were planned to meet his goal and strengthen structurally deficient members, restore deteriorated deck surfaces, reduce future maintenance efforts, and enhance the life of the structure. Additional constraints included the fact that the garage could not be closed during repairs and that only 200 parking spaces could be taken out of service at any time during construction.

A strategy of installing a continuous bonded concrete overlay to existing decks evolved as a result of past experience and the desire to meet project objectives. The team considered patch repairs in combination with a traffic-bearing waterproofing membrane, but the initial and maintenance costs of this approach exceeded those associated with the overlay scheme. The results of the field work that was performed indicated that the concrete cover atop embedded steel reinforcement was shallow, and that significant amounts of de-icing salts had been absorbed by the concrete. Therefore, deterioration would be expected to continue despite membrane installation.

The final design phase required consideration of several details:
Removal of deteriorated deck concrete would be performed using a machine that erodes the concrete surface with water jets, called hydro demolition. This process has many advantages, including minimal damage to embedded post-tensioning tendons and a concrete surface that is more conducive for bonding with new repair materials. Engineering analyses were performed to assess the effect of the removal of deteriorated concrete from post-tensioned slab surfaces. The results of this work indicated that removal depths had to be restricted. Therefore, hydro demolition would need to be performed with extreme care to avoid deep demolition that could harm the structure.

Shoring and counterweighting slab spans were necessary during the removal of upper portions of slab concrete to minimize concrete cracking after reinstatement of the facility.

High-performance microsilica concrete was chosen as the overlay material because of its relatively high strength, low permeability, and low maintenance requirements. An inspection and testing program, including the use of overlay mockup specimens and bond tests, was developed to assess the expected bond of the overlay to the existing concrete slabs.

Construction
Repair work started in March 1992. The first task involved the construction of three overlay mockup specimens to evaluate the bond of the high-performance concrete to a surface subject to the hydro demolition process. The results of this work indicated that hydro demolition could be adequately controlled to avoid excessive removal depths and that good bond between overlay and substrate could be achieved. This information resulted in significant time savings and simplification to the overlay installation procedures.

As production work proceeded, hydro demolition on the concrete slab top surfaces exposed a relatively large number of post-tensioning tendons, which simplified inspection of the tendons. However, damage in the form of deep nicks and corrosion were found in some tendons located adjacent to concrete patches of previously repaired areas. It appeared that the misuse of demolition hammers in the previous repair program(s) resulted in damage to the tendons, which was not remediated at the time. If all previous repaired areas concealed nicked and/or corroded tendons, and all such defects required repair, construction costs were likely to escalate quickly.

To ensure durability, tendons exhibiting extensive corrosion needed to be repaired. A laboratory testing program was developed to determine the significance of the observed nicked conditions. The program included the performance of tensile tests on ­intentionally-damaged tendon specimens to emulate observed conditions in the parking garage. The results of this study provided an assessment of the strength reductions in tendons containing nicks and severed wires. Acceptance criteria for existing conditions (e.g., shapes, sizes, and numbers of nicks) were developed, resulting in significant savings in construction time and costs.

In most instances, tendon replacement was performed by re­threading a new, greased tendon into existing sheathing and splicing to existing tendons. In a few instances, replacement required trenching of the concrete slab to facilitate installation of new post-tensioning tendon systems. During the course of the work, 170 of the 1,050 slab tendons required repair.

Repair Performance
The parking structure is still functional today, 20 years after completion of repairs. The repair decisions that were made and repair construction that was performed have more than doubled the life of the structure. Based on an April 2013 inspection and discussions with the owner, the garage has required minimal maintenance. Two repair programs have been performed since the 1993 repair; they consisted only of isolated concrete patch repairs, routing and sealing of some slab topside cracks, and some joint maintenance. The total area of patch repairs reflects significantly less than 5 percent of the total surface area of the 1993 overlay. The inspection did not identify any evidence of tendon repairs or breakage. Based on performance to date, the garage has many years of service life remaining.

The correct choices in repair details and durability enhancements, including the use of a high-performance microsilica concrete overlay, increased the initial construction cost but provided measurable return on investment by reducing maintenance costs and significantly extending service life. This is an example of how durable and cost-effective concrete repairs can be designed and constructed to significantly increase the service life of an existing parking garage.

Eric VanDuyne is senior engineer with CTLGroup. He can be reached at evanduyne@ctlgroup.com.

John Vincent is principal structural engineer with CTLGroup. He can be reached at jvincent@ctlgroup.com or 847.972.3242.