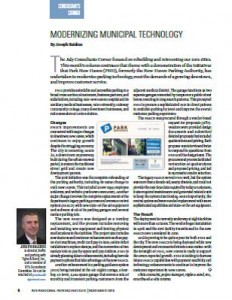 The July Consultants Corner focused on rebuilding and reinventing our core cities. This month’s column continues that theme with a demonstration of the initiatives that Park New Haven (PNH), formerly the New Haven Parking Authority, has undertaken to modernize parking technology, meet the demands of a growing downtown, and improve customer service.

Changes
PNH’s improvements are concurrent with major changes in downtown New Haven, which continues to enjoy growth despite the struggling economy. The city is removing Route 34, a downtown expressway built during the urban renewal period, to restore the traditional street grid and create new development parcels.

The first initiative was the complete rebranding of the parking authority, including its name change to Park New Haven. This included a new logo, employee uniforms, and website (ParkNewHaven.com). Another major change involves the complete replacement of the department’s legacy parking access and revenue control system (PARCS) with new state-of-the-art equipment and software at all of its parking garages and several surface parking lots.

The new PARCS was designed as a turnkey replacement, and the process includes removing and installing new equipment and limiting physical modifications to the facilities. The project also includes new features and customer enhancements such as pay-on-foot machines, credit card pay-in-lane, offline ticket validations to replace stamps, and the conversion of two surface lots to pay-by-space and pay stations. PNH is already planning future enhancements, including barcode payment options that take advantage of the new PARCS.

Another enhancement is a parking guidance system (PGS) being installed at the Air Rights Garage, a four-bay, 10-level, 2,565-space garage that serves a mix of monthly and transient parking customers from the adjacent medical district. The garage functions as two separate garages connected by ramps over a public street below, resulting in long search patterns. This prompted PNH to procure a sophisticated PGS to direct patrons to available parking by level and improve the overall customer parking experience.

The PARCS was procured through a vendor-based request for proposals (RFP). Vendors were provided design documents and submitted detailed proposals that included qualifications and pricing. Each proposer was interviewed twice to respond to questions from PNH and the design team. The procurement process facilitated verification of qualifications and proposed pricing, and led to successful vendor selection.

The legacy PARCS served PNH well, but the system was more than a decade old, nearly obsolete, and could not provide the real-time data required by today’s customers; it also required maintenance and generated related costs to keep the system functioning. More importantly, the central system software needed replacement with more sophisticated capabilities and state-of-the-art equipment.

The Result
The deployment is currently underway at eight facilities with more than 40 lanes. The vendor began installation in April and the first facility transitioned to the new PARCS over a weekend in June.

2013 is proving to be quite a year for both PNH and the city. The new PARCS is being deployed while new development and reconnected streets come online. With the foresight of PNH, New Haven is ready to support the area’s expected growth. PNH is looking to harness future PARCS capabilities with payment flexibility and technology enhancements to continue to improve the customer experience in New Haven.

Joseph Balskus is director, traffic and parking with Tighe & Bond, Inc., and a member of IPI’s Consultants Committee. He can be reached at jcbalskus@tighebond.com.