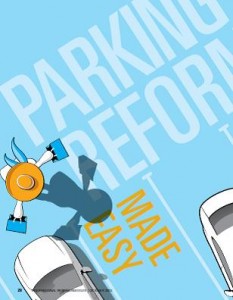 In his new book, Parking Reform Made Easy, Richard W. Willson, professor and chair of the department of urban and regional planning, California State Polytechnic University, Pomona, argues that minimum parking requirements are outdated and unnecessary. After all, he says, they offer each person’s car a space at home, work, the grocery store, and the movie theater even though it only needs one at a time. To make the most of our cities and develop a transportation system that works for everyone, he says, parking reform is necessary.

The book offers guidelines on creating parking requirements that make sense in terms of future trends, along with a toolkit to revisit outdated requirements. It also includes guidance on working within political environments to reform parking and transportation.

Willson recently talked with The Parking Professional about parking reform, why minimum requirements may have passed their prime, and where it all goes from here.

The Parking Professional: Why did you write this book?

Richard Willson: I’ve been doing parking analysis for 25 years as a consultant and professor and practitioner. I keep encountering local jurisdictions and developers who were wrangling over the question of how much parking should be provided, and what new requirements should say about parking.

Donald Shoup, Ph.D.’s book, The High Cost of Free Parking, had a big effect on my thinking. His desired prescription is that cities make parking market-based and get rid of minimum requirements. In the core of some big cities, that’s what’s happening. But in smaller cities, they’re not ready to get rid of requirements and base parking on pricing alone.

A lot of developers hire consultants and go to planning commissions with their parking plans, and somebody says, “Where did you get this number?” I want to help empower local community folks to reform minimum parking requirements. The book provides a process on what to do and how to go in front of a city council and explain how it will work.

TPP: You pose the question of whether we should eliminate or reform parking minimums. Ideally, which would it be?

RW: I really think it depends on context. In core areas with mixed-use areas, deregulation is the right answer. In lower-density communities, however, it’s politically impossible.

I’m an incrementalist at heart. I think cities should start reforming, and oftentimes that means lowering minimum parking requirements. At some point in the future, they may get to the point of deregulating it entirely.

Ultimately, I would prefer a market-based parking supply system. In the book,
there’s an image of a suburban shopping mall in the suburbs with an arena next to it. Even conforming to minimum parking requirements, you can see that it’s a big waste of land. That’s kind of obvious to people. And in urban areas, parking requirements are standing in the way of economic development. If a city requires 10 spaces per 1,000 square feet for restaurants in an historic area, no one can find that land. So inadvertently, that’s preventing restaurants from developing. You end up with land waste in suburban areas and stifled development downtown.

TPP: We talk about the history of parking starting in the 1940s and 1950s, when the influx of the car necessitated parking requirements to be outlined. Experts now say we’re facing a time when fewer cars will be on the road, as the Millenial and other generations reject single-owner vehicles as a norm. What will that mean for parking policy if it comes to fruition?

RW: A chapter in the book deals with the irony that land use planners make their plans to look 20 to 40 years into the future, but they do that by looking at demographics from the past. When cities use parking utilization data from standard sources, they’re looking backward.

I think there’s a big change in perception that shows up in the numbers of 16-year-olds getting driver’s licenses. We need to recognize those social and demographic changes. If the building is going to last 50 years, we should use a future-oriented parking requirement for it rather than one that’s based on looking at the past.

The car-sharing phenomenon we’re seeing now and real-time carpooling are examples of a whole bunch of ways technology may allow the next generation to have lower vehicle ownership than what we’re all used to. Of course, if you’re designing sites and districts so they can share parking and a site builds too much, it’s less of a concern—they’ll share it with future development. If everything’s isolated from everything else, that’s just waste.

TPP: You mention several cities, including Philadelphia, Portland, Ore., and Vancouver, that are working on parking codes that support livability. What are they doing that other cities might want to imitate?

Philadelphia did a comprehensive code revision and a lot of big cities are doing the same thing—Denver is doing it, and Los Angeles is doing it right now. This is an opportunity to better connect parking requirements with community goals and other zoning provisions—to say, “What is the kind of district we’re trying to create, and how does the parking support those specific goals?” As a result, their requirements are much easier to read, simplified, and in some cases, lowered.

Vancouver is a city that’s done a lot of transit development and land use planning. They are deliberately pursuing a very multimodal transportation system. Parking is part of that.

TPP: There’s a relatively new trend, particularly in downtown multifamily housing, to not require any parking. Does that ever make sense or ever completely not make sense?

RW: The problem in the past was that we had these uniform rules. My mantra is that we should get away from the universals.

I’m working with a developer in downtown Los Angeles right now, and the city is getting ready to get out of the way—it’s not telling the developer how much parking to build. The developer, though, still faces the question of whether it’s a market risk to build his building without any parking. Sometimes it is, and sometimes it isn’t. If a developer is leasing or making arrangements for shared parking with adjacent or nearby properties, it make sense as long as the developer is convinced that there’s no marketing risk to having no parking onsite. This kind of practice creates a demand for shared-use parking facilities.

What I notice in big downtowns is that people aren’t using their cars every day, but they still want to own one. So there’s a market for parking that offers access two or three times per week. Let’s leave it up to the market. What is the justification of a public agency forcing a developer to build more? I’m not anti-parking by any stretch, but if the market supports that, by all means, it should be used.

RW: That is exactly what makes cities nervous about lowering parking requirements. Part of what’s happening in some areas is a move to a more blended rate approach, where individual uses will vary in terms of requirements. The book offers a parking management toolkit that helps people work through parking demand that may be higher or lower for a particular use or that may be shared, which lets you respond when the demand is different than what you anticipated. I think our cities’ approach has been “set it and forget it.” Get the requirements right, set the lot fees, and don’t worry about it after that. We’re moving towards a managed approach where you build parking after doing studies and after figuring out pricing. It’s when you really see the true demand for parking, and not just relying on zoning.

TPP: What about dense cities such as Boston vs. those with more room such as Boise, Idaho. Should they follow different models?

RW: I really think so. My daughter went to school in Boston. She wanted to buy an air conditioner for her apartment. So we walked to the hardware store and gave them a driver’s license, and they gave us a dolly and we walked the air conditioner back to the apartment and then returned their cart. This idea that you need a car to buy an air conditioner is totally not true, at least in Boston. That probably wouldn’t be true in a smaller city with less density. We have communities working towards mixed use and walkability, but it takes decades to do that.

We need to overcome this idea of rounding up, which is when you really think the use will be 2.4 spaces to 1,000 feet and you round up to three spaces. It’s rounded up instead of using a more analytically-based, policy-based system. That’s what we need if we’re going to have these regulations at all.

TPP: Where do we go from here?

RW: I’m hoping elected officials will hear about the book and that planners will read it. I sometimes meet with local planners and ask if they have issues with minimum parking requirements, and all their hands go up. I hope big cities will do comprehensive rewrites, and that others will start with the most pressing issues, whether they are restaurants in downtown or offices in the suburbs where there are empty lots. Start there. Make some changes and show that the world doesn’t end if changes occur. Then, you can work on it incrementally.