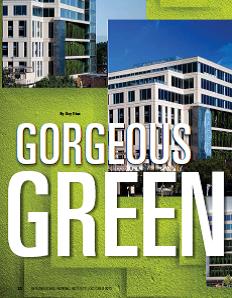 New garage decks are obviously developed to fill a perceived need for additional parking in a given area. The bet is that, as in the movie “Field of Dreams”, if you build it, they will come. Mixed-use structures hedge that bet by combining supply and much of the demand in one package.

Located in the fashionable Southtown area of Minneapolis, the MoZaic mixed-use project stacks six floors of structured parking on top of ground floor retail and restaurant space, and tops it off with three floors of offices. The 10-story structure contains 13,000 square feet of restaurant space on the ground floor, 556 parking stalls on the second through seventh floors, and 65,000 square feet of Class A office space on the top three floors. The parking levels are disguised by a six-story, vertical grow wall that’s billed as the largest green wall in Minnesota.

They Will Come
The synergy created by mixed uses is the formula for success. It’s cyclical: Having retail and parking handy attracts office tenants and restaurant customers who, in turn, provide much of the clientele for the parking spaces. Placing the offices on the top floors of the structure provides fabulous views of downtown Minneapolis and the lakes and was a major factor in attracting office tenants; this jumpstarted the synergy process. To make the whole package architecturally appealing, an art park with connections to nearby green trails was constructed in front of the building, and the giant green wall was added to the building’s front to mask the parking deck.

“The mixed-use design was conceived with the understanding that the building would be displacing parking by infilling an existing parking lot,” says Mark Harris, managing architect with the BKV Group. “There also was an obvious need for parking in the area. In addition to parking for the offices, the deck also services the parking needs of the [ground floor] restaurants and the neighborhood.” While there is no physical separation, the upper levels of the deck are designed for the office clientele with separate key card control in the elevator lobby. Public parking, operated by Loop Parking Company, Minneapolis, features automated ticket and pay stations.

“Our design vision for MoZaic was centered on three goals,” explains Joanna Hicks, senior vice president of project owner The Ackerberg Group of Minneapolis. “First, we wanted to solve the parking shortage in the area that was a concern to nearby residents by providing sufficient parking to handle peak load times. Second, we wanted to create retail to bring energy to our plaza. And third, we wanted to add daytime population to the area, create a more balanced local economy, and provide demand for the goods and services of the retail and restaurant establishments beyond just nighttime and weekend traffic.”

The Green Wall
The 60- by 90-foot-long green wall is flanked by a decorative custom-perforated metal screen and faces a 20,000 square-foot, ground-level plaza and art park at the building entrance.

Construction of the mixed-use building consisted of precast concrete spandrel panels and precast architectural cladding from Hanson Structural Precast. These are set on a post-tensioned, cast-in-place structural system and reinforced concrete foundation. Shear forces are transferred to vertical elements in the structure, including the heated elevator core and stair tower constructed with Hanson precast insulated wall panels.

Office floors feature floor-to-ceiling glass with floors separated by four-foot-high horizontal, precast spandrels. In the garage, the spandrels are only at even numbered floors and are slimmed down to two feet, eight inches high. The other garage floors are set back. Floor height at the first level of parking is nine feet, nine inches to accommodate accessible parking. On the other parking levels, the floor height is eight feet, nine inches.

“To accommodate the green wall, the post-tensioned floor slabs at levels two, four, and six cantilever out above the plaza below,” explains Harris. “Planter beds are located in these areas. Pre-manufactured four-inch-deep gridded mesh grow screens are clipped to the structure directly above the planter beds. Various species of vines are planted in these beds, extending vertically onto the grow screens. To accommodate drainage, the cantilevered slabs are insulated and waterproofed. The planter beds are filled with lightweight soil with an irrigation drip. Drainage for the planter beds is accommodated through weeps back into the parking garage.”

The large public plaza in front of the building contains benches, plantings, statues, a sculptured-art water fountain, and such fun objects as an 11-foot-tall clay human head, a giant blue arrow, and a reproduction of an old streetcar. Adjacent to the building and accessed from the art park plaza is the historic Midtown Greenway, which is an abandoned railway converted to a bike and pedestrian trail. To capitalize on this feature, the MoZaic plaza features both a ramp down to the greenway and a pedestrian bridge over it, connecting the building with neighborhoods to the north that had been cut off from the site.

Sandwiching
Placing an unheated parking garage between two enclosed heated spaces (office and restaurant) presented obvious challenges to the design of the thermal envelope, says architect Harris. “The challenge was how to best address the atypical situation of an unheated second floor parking deck located directly above the tempered restaurant spaces. The last thing we wanted with the wild fluctuations in temperature in Minneapolis was to have the slab above the restaurants sweat with condensation. The question was how to best insulate the restaurant ceilings. This was handled with a closed cell, foam insulation product that contains an inherent vapor barrier. Use of the foam insulation product required prior review and approval from the City of Minneapolis. Concerns related to fire and flame spread were addressed with a fire-resistant intumescent coating.”

The interface with the office space was handled differently. There is a suspended, exterior-grade acoustic ceiling above the upper deck of the parking garage. The space above that—between the ceiling and the first floor of offices—is mechanically tempered. This approach addressed the concerns related to thermal performance while also providing a warm floor for the office tenants.

Another challenge, adds Harris, was meeting building code and zoning requirements that seemed somewhat at odds. The code has strict exterior envelope openness requirements to ensure ventilation of open parking garages “At the garage, there are both the horizontal spandrel panels and vertical infill panels which had to be taken into account,” Harris explains. “Additionally, we had to assume a certain percentage of openness for the green wall and review that with the city. Finally, there were strict requirements as part of the planned unit development (PUD) because the surrounding neighbors were concerned about the impact of headlights in the evening. To solve this issue, perforated metal panels were installed between the precast panels designed to obscure vehicle headlights as people pull into parking stalls.”
The Ackerberg Group, which specializes in urban, infill, mixed-use projects, is currently working on plans for a second building to be built on the site’s remaining 116-stall, surface parking lot. The plan calls for a 150,000 square foot building with offices and retail that would include two-levels of parking with 720 stalls underneath the building. Construction is scheduled for 2014.

Roy Diez is executive vice president of JOA, Inc. He can be reached at roydiez@att.net.