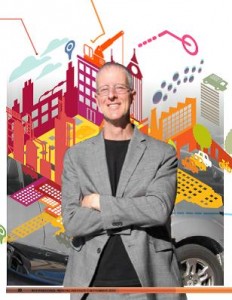 Jeff Speck, AICP, CNU-A, Leed AP, Hon. ASLA, didn’t start out writing about parking. A renowned city planner and architect, his first book, Suburban Nation: The Rise of Sprawl and the Decline of the American Dream, looked at the reasons behind sprawl.

Parking didn’t take center stage until publication of his newest book, Walkable City: How Downtown can Save America, One Step at a Time, last November. The book looks at how making cities more walkable, embracing complete streets, and re-thinking traffic and parking can benefit neighborhoods, residents, and businesses. He recently sat down with The Parking Professional to talk about it.

The Parking Professional: Where did the idea for the book originate?

Jeff Speck: Almost everything I’ve learned about the management of parking and policy, I learned from Don Shoup, Ph.D. Where I have value-added, I believe, is in complete streets and how parking can be used to make them. Traditional resources don’t talk about the incredible roles parallel and angle curb parking play in making places walkable and livable. Almost nobody understands the importance of the barrier of steel that parking forms between the traffic and the sidewalk that makes the sidewalk feel comfortable.

This is a follow-up to a book I wrote with some colleagues called Suburban Nation. It’s essentially a new urbanist argument: we love older cities and towns, and we love making new ones that use the lessons of those places, but we hate suburban sprawl. And now, the challenge is not so much the “suburban” as it is the “sprawl.” We’re auto-dependent. The differences between places that work for us and those that don’t isn’t gauged on how dense the population is, but to what degree we’re dependent on the auto to survive and accomplish our daily needs. Is the car a means of freedom, or is it a prosthetic device?

TPP: Where does parking fit in?

JS: A number of us in new urbanism have been looking with a lot more focus on our existing communities as opposed to making new ones. Many of our clients are municipalities—mayors or municipal officers or citizens who care about cities. What’s always stated or implied in our discussions is that we all want street life. I’ve been thinking about this for many years: if the measure of a successful downtown is street life, how do you get people to walk? Particularly in a country where everyone drives, I started thinking about how can we—and how do we—make walking a superior choice to driving?

This isn’t an anti-car argument. It assumes and accepts that most Americans will continue to own and drive cars, but it acknowledges that the most successful places in the country are places where cars aren’t central. Those are cities such as New York, Boston, Chicago, Washington, D.C., San Francisco, and smaller places where people have embraced biking and walking, such as Portland, Ore., and Minneapolis. It’s really two handfuls of cities in all. The problem is that all the city planning intellectuals live in only those cities. No one is talking about the fact that most Americans don’t live there. In typical small to mid-sized cities where most people live, there’s not been much discussion or much progress.

Let’s talk about the typical American downtown. For awhile, every American city was becoming like Los Angeles. Our streets that used to be two or four lanes became four to six lanes, and the parking was wiped off the curbs. The first thing cities do is turn the parking lanes into driving lanes, if not permanently then at least during rush hour. It’s very typical to say, “No parking on this curb during rush hour.” But that curb is where a cafe is going to have a happy hour, and nobody is going to sit at those tables. The side that has curb parking is full of customers, and the side with traffic has only empty tables, and pretty soon the bar goes out of business. I just observed this in Fort Lauderdale. People do not sit unprotected three feet away from cars going 60 feet a second. It’s not human nature.

Parallel parking was the first sacrifice to the gods of smooth traffic. That would be acceptable if it didn’t wreck cities or if it worked. But it doesn’t work. The fundamental argument above all others is that when you try to fight congestion by increasing capacity, you remove the one impediment to people driving more, which is congestion. So the question isn’t whether you’re going to have congestion, but how many lanes of congestion you’re going to have.

JS: There are three things merchants tend to believe that are wrong: that street trees, streetcars, and properly priced parking will harm their business. Experience has shown us that nothing but the opposite is true.

The key factor in getting merchants to agree to higher-priced parking in front of
their businesses is to take most of the revenue from that higher price and invest it in the streets, the trees, the storefronts, and the environment of that exact place. It’s only a price gouge if you charge more than you need to get the desired outcome, which is one empty space per block face. You need to have confidence that Daddy Warbucks can find a space near the furrier, and then also provide lower-priced parking at a site located a farther distance away. As Bill Fulton, the former mayor of Ventura, Calif., said, “If you were allowed to drive right into the mall and park in front of a store, you can bet they’d charge more for that.”

TPP: So what’s the key to providing enough parking?

JS: I’ve worked in cities where it meant lowering the cost of parking because there were too many spaces. In Davenport, Iowa, we made spaces free. Previously, lots were free and streets were not, and nobody was parking along the curbs. We made the streets free just to have cars protecting the sidewalks. But most cities have the opposite problem, which is curb overcrowding.
We’re now seeing these expensive, high-tech congestion pricing plans such as in San Francisco, which placed sensors in the street and otherwise very carefully and intelligently varied the price of parking. I think you can get 90 percent of the bang with one-one-hundredth of the buck by simply pricing parking properly with limited variation. In most cases, it’s not a case of adjusting for a dozen circumstances, but rather just adding a buck during certain hours.

TPP: How can parking be used more effectively to make cities more walkable?

JS: The biggest blight to walkability in most cities is the large number of private surface parking lots that line the sidewalks. The problem with those lots is that they’re private and they’re profitable. It’s difficult to convince an owner to put something else there unless it’s going to have better cash flow. It’s true for city-owned lots as well. The city is counting on that revenue. The intelligent impulse to reduce the amount of off-street parking in a downtown often means you’re reducing public income. That can be a struggle.

The way to balance that equation is to charge the right amount of parking on the street. If you price the most popular parking spots properly, the net revenue to the city shouldn’t be any worse.

TPP: Why the emphasis on on-street parking over off-street city lots?

JS: Curb parking does so much more for cities and towns than people understand. It protects the sidewalk. It delivers people to the sidewalk rather than to a parking lot behind a building. Street parking isn’t typically found right in front of people’s destinations, so those people end up being pedestrians. They start bumping into each other, and that creates street life and civic culture.

The National Main Street Center said many years ago that each on-street parking spot that’s eliminated costs business owners $10,000 per year. That data is old enough that it’s probably closer to $20,000 per year. Retail experts such as Bob Gibbs will tell you that certain kinds of stores can’t survive without the teaser of parking, and very few businesses won’t suffer tremendously from having no parking in front. It also makes cars drive slower because of the potential for conflict of cars pulling in and out, which of course enhances walkability.

Most cities I work with don’t begin to fully recognize the value of on-street parking.

TPP: You talk about the value of back-in angled parking, but it’s not terribly popular. Why not?

JS: There’s a fun controversy between head-in and back-in parking. My take on it is to acknowledge that back-in parking is clearly safer. Head-in forces you to back out into a dynamic system, but backing in is more difficult—you’re backing into a tight area versus an open area. If you’ve got a city where people already know how to parallel park, you’ve got a hope of getting back-in parking passed. But if you don’t have parallel parking in your city, don’t even try it. People won’t be able to do it.

There’s another thing to think about: head-in parking and bikes don’t mix. The real-world experience is that bicyclists’ lives are saved and injuries drop when cities switch from head-in to back-in parking. But some cities, like Cedar Rapids, Iowa, were willing to try back-in parking and ended up reversing it later, because drivers just hated it. One city council member said he voted for it just “for the entertainment value!” People generally want head-in or parallel when it comes to on-street parking. But don’t do head-in where you have cyclists.

Often what I do is take cities in which streets are just too wide—they’ve got more lanes than they need—and finding ways with nothing but paint to right-size those streets, to turn them into complete streets. What that often means is turning parallel parking back into angle parking and reversing an unfortunate history—turning that four-lane system back into a two-lane system by re-angling the parking. This makes the streets better for businesses and for pedestrians by slowing traffic slightly in a way that does not impact commute times. It’s a win-win-win.