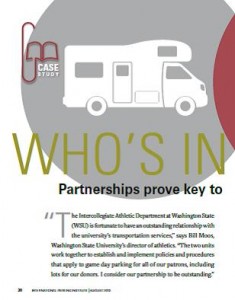 The Intercollegiate Athletic Department at Washington State (WSU) is fortunate to have an outstanding relationship with the university’s transportation services,” says Bill Moos, Washington State University’s director of athletics. “The two units work together to establish and implement policies and procedures that apply to game day parking for all of our patrons, including lots for our donors. I consider our partnership to be outstanding.”

Flash back to the fall of 2010: Moos received a surprising call on his weekly radio show about recreational vehicle (RV) parking for football games, and it wasn’t what you might call positive. Worse yet, there were follow-up calls during the next week’s show. An extremely public media outlet that was supposed to foster conversations about college athletics became a forum for complaints about RV parking. Only the nightly news could have been worse.

Depending on the event, WSU accommodates 350 to 500 RVs per event weekend. WSU’s RV parking situation arises from both necessity and tradition: Pullman, Wash., where the campus is located, is a smaller college town with fewer hotel rooms than can meet demand during large events. RVs are a necessity. Football RV culture has become more popular with the commercialization of tailgating, and parking for those vehicles has grown in popularity, both for overnight accommodation and daytime-only fans.

More than 10 years ago, a simple set of regulations was put into place that didn’t work out as well as staff hoped. Rates were low, self-parking created impassible areas for emergency vehicles, and fires were even built on the pavement or green areas. Fans arrived as early as the Wednesday before a game and some parked their campers in non-RV lots.

Recognizing that the issues would only be compounded by increasing demand, new regulations to address safety and capacity were introduced each season, resulting in an incrementally higher level of discontent from the RV community. Calls came and letters were written to various university officials, and some fans became agitated and verbally abusive toward event parking staff, who heard every complaint in the book. “Who’s in charge of RV parking?” “Why is WSU treating their donors like this?” “Who approved these rules?” “Wait until the president (of the university) hears about this!”

University officials didn’t always agree on the answer because a clear distinction of roles and responsibilities was not in place. Transportation Services (TS) had a great working relationship with athletics but there was no formalized event parking management plan. After a season of confusion for staff and RV patrons, something had to change.

Feedback
A town hall meeting was arranged to give the RV community its voice. The strict enforcement of regulations was mentioned during the meeting. Restrictions that limited RV drivers to arriving on campus after 5 p.m. on Thursday were unpopular. No saving spaces was an issue as were a few other regulations. However, what the loyal fans really wanted was a showing of appreciation.

Questions were asked and answers and suggestions were given. From this point, the Game Day Experience partnership evolved. It’s a simple model, really: athletics manages the relationships and TS and public safety manages logistics. When the two intersect, communication between the departments happens before decisions are relayed to fans. More importantly, those unified messages go to the fans as just that—unified.

We listened to the patrons and changes were made. Athletics created an operations center in the primary donor lot, the spirit squad and mascot visited the RV lots regularly, and staging areas were created that allowed RVs to arrive earlier than 6 p.m. Pre-season communications to these fans were prolific. More changes in regulations and rates were to come, but they were given advance notice and a feedback period. The relationship between the university’s departments and the fans grew a little stronger each year.

The Season of Big Change
In January 2012, athletics and TS met to discuss the need for big changes to all football game day parking. Record attendance was expected for the 2012 WSU football season thanks to the hiring of new head coach Mike Leach and a beautifully renovated Martin Stadium.

Where was everyone going to park?

Together, athletics and TS ripped off the Band-Aid with a complete overhaul of game day parking. Not only did the mass changes create considerable logistical challenges, but they represented a monstrous disruption of culture for the fans. We were about to put the Game Day Experience management model to the test.

Complaints about rates and operational changes were directed to athletics. “We knew we had a big challenge ahead of us,” explains Chris Boyan, assistant director for TS, “but having athletics focus on relationships with fans allowed us to focus on operational solutions.”

Martin Stadium is located in the center of campus and does not have dedicated parking. A considerable percentage of the parking system was already used for donor parking, and that need increased with the additions of suites and loge boxes. Donor parking displaced roughly 1,200 general parking spaces in a system that reached capacity during seasons of lower attendance.

The solution for managing parking demand, as we all know, involves increasing rates. Athletics increased its donor levels considerably for the first time in many years. WSU had historically not charged for general parking, and that went from free to $20 per space in one season. In addition, major changes were introduced to the RV parking program, including requirements for minimum donation levels, and all RV parking was pre-sold online.

For control purposes, cash operations for general parking needed to be kept to a minimum, which required credit card acceptance in the field. WSU didn’t have a real-time online system to do that. The development of an online event parking platform required integration with TS’ management system and athletics’ ticket system. Partnerships and cooperation between vendors came into play with the customization of the systems. The costs of hardware for the wireless point of sale (POS) system to vend and verify permits and accept credit cards in the field were split by athletics and TS.

The development of a park-and-ride shuttle system required the assistance of various property owners within the community. Local churches offered their lots, WSU’s veterinary college offered a large pasture area, and the City of Pullman provided parking in various locations. Pullman Transit assisted with development of shuttle routes, providing 10- to 15-minute frequencies throughout the system.

New traffic plans and road closures to separate donor, transit, and general parking traffic flows were developed with the assistance of local and regional enforcement and planning agencies. All agencies and departments coordinated the design and placement of new signage.

TS was offered a seat in the new stadium operations center on game days. The ability to communicate directly with public safety and athletics created unprecedented institutional resolve.

By the end of the first home game, there were many reasons to celebrate. There were very few issues that couldn’t be remedied on the spot, and parking didn’t receive negative press. The entire system was operational for the first home football game and was executed with unprecedented partnerships and teamwork. We were all in it together.

“The Washington State University Department of Intercollegiate Athletics has a great partnership and working relationship with transportation services on campus related to administering parking for our home athletic contests,” says Randy Buhr, senior associate director of athletics. “Our departments continually work together on an ongoing basis throughout the year to have a parking program in place for home sporting events that hopefully will be viewed positively by our fans, the participating teams, and others.”

Bridgette Brady, CAPP, is director of Washington State University Parking & Transportation Services. She can be reached at b.brady@wsu.edu or 509.335.5105.