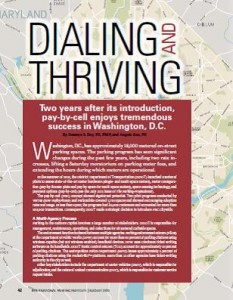 Washington, D.C., has approximately 18,000 metered on-street parking spaces. The parking program has seen significant changes during the past few years, including two rate increases, lifting a Saturday moratorium on parking meter fees, and extending the hours during which meters are operational.

In the summer of 2010, the District Department of Transportation (DDOT) launched a series of pilots to assess state-of-the-art meter hardware (single- and multi-space meters), meter configuration (pay-by-license-plate and pay-by-space for multi-space meters), space-sensing technology, and payment options (pay-by-cell) (see the July 2011 issue of The Parking Professional).

The pay-by-cell (PBC) concept showed significant potential. Two pilot programs conducted by Verrus (now PaybyPhone) and Parkmobile covered 1,700 spaces and showed encouraging adoption rates and usage. In less than a year, the programs had 30,000 customers and accounted for more than 100,000 transactions. Consequently, DDOT made a strategic decision to introduce PBC citywide.

A Multi-Agency Process
Parking in the nation’s capital involves a large number of stakeholders. DDOT is responsible for management, maintenance, operations, and collections for all metered curbside spaces.

Clearly, implementing a program that introduces another payment option at all metered spaces in D.C. required considerable coordination, collaboration, and integration across different agencies and systems.

Pay-by-Cell Program Roll-Out
Recognizing that the program required buy-in from various stakeholders, the request for proposal (RFP) was developed in a collaborative and inclusive environment. DPW was an integral partner in developing the RFP, selecting the vendor, and negotiating the contract.

Key features of the solicitation included:

Transaction fee-based business mode. The cost of the entire program would be borne by users.

Turnkey solution. Given the complexity of the program, DDOT was looking for a vendor to provide a turnkey solution with several specific stipulations:

—Procure and maintain ticket-writing hardware for all DDOT TCOs.

—Install on-street signs and decals on the meters indicating zone numbers for each block face along with information for parking transaction initiation.

—Integrate and implement the system. The PBC transaction information had to be exchanged in real time with the ­ticket-writing software.

—Plan and implement an aggressive marketing and public outreach campaign.

—Train staff, including all TCOs, PEOs, and other key partners/stakeholders.

—Provide 24/7 customer service through a call-center and proactively resolve issues for PBC customers.

Vendor responses were evaluated by a multi-agency selection committee using the four factors identified in the RFP as shown in Exhibit 1.

DDOT selected Parkmobile as its vendor. The project was implemented on a very aggressive timeline, primarily to sustain the momentum, excitement, and customer base from the two parking meter pilots. The key milestones and high-level tasks are shown in Exhibit 2.

System Functionality
Exhibit 3 (Adapted from Parkmobile) shows the functionality of the PBC program in Washington, Customer. Registers for the program using a credit/debit card and license plate; parks and initiates a parking session using either interactive voice response (IVR) system or smartphone application, specifying the zone number and duration. The transaction information goes to a Parkmobile server.

Marketing and Public Outreach
A key component of the program was an aggressive public outreach and marketing campaign. Parkmobile’s marketing team, in collaboration with DDOT’s Communication Office, devised a comprehensive and robust outreach plan for this project. The plan included:

Exhibit 4 (Source: Parkmobile) shows sample promotional materials and pictures from the ribbon-cutting ceremony that was attended by the mayor of D.C. and other key officials.

Options for Initiating Pay-by-Cell Transactions
The PBC program allows a customer to initiate a transaction using two methods: cell phone or smartphone application. When the program started, a majority of transactions (55 percent) were initiated through the IVR systems. As the market penetration of smartphones increased and the application was expanded to multiple platforms, this trend reversed. Now, 80 percent of PBC transactions in D.C. are initiated through the app as shown in Exhibit 7.

Pay-By-Cell User Characteristics
Exhibits 8, 9, and 10 provide a snapshot of user characteristics. Eighty-seven percent of customers have their vehicles registered in one of the three contiguous jurisdictions (D.C., Maryland, or Virginia). The remaining 13 percent come from other states. It is interesting to note that within 45 days of launch, vehicles from all 50 states had used the PBC system.

Almost 50 percent of users parked for more than 90 minutes. Given that the revenue per transaction for PBC is almost three times as much as coins, the program appears to be especially attractive for longer duration parkers.

Customer Feedback Survey
A customer survey was conducted as part of the program, and between 69 and 78 percent of respondents said they had a positive experience, based on the question asked. Eighty-six percent of customers would recommend the program to others, and 95 percent would use the system again.

Program Enhancements
As the program grew in popularity, there were issues faced by all stakeholders.

As the program ramped up, call volumes to the 24/7 call center increased significantly. The program was launched in phases in various parts of D.C. from May to June 2011. Call volumes increased 88 percent from May to June, and 225 percent from June to July. In July 2011, Parkmobile’s call center fielded approximately 43,000 calls from PBC customers in D.C. D.C. agencies worked with Parkmobile to refine and fine-tune certain business processes to ensure that call volumes stabilized and eventually decreased (call volumes dropped to about 17,000 by June 2012 and 7,000 by December 2012) in spite of increased system use.

Tickets Written in Error
One of the issues the team focused on was the number of tickets written in error. A multi-agency/multi-disciplinary team from public and private sectors adopted a data-driven, Six Sigma-based approach to identify root causes of problems. Exhibit 11 shows the identified root causes and some of the solutions developed by the team.

As a result of these enhancements, tickets written in error dropped from 2.5 percent in June 2011 to less than 0.001 percent by the end of the year. This was another great example of how the team worked together to enhance the quality of offering for the customers. The team also modified the business process to significantly reduce the cycle time to resolve issues when tickets were written in error as shown in Exhibit 12.

Responding to Increased Processing Fees
One of the significant external factors that affected the PBC program was a dramatic increase in credit/debit card processing fees. To offset the increased costs, DDOT worked with Parkmobile to introduce a virtual wallet concept to help minimize the number of credit card transactions. People who signed up for virtual wallet were able to keep their transaction fees at previous levels. As shown in Exhibit 13, since its inception in October 2012, virtual wallet adoption rates have increased; they now account for 16 percent of PBC transactions. In January 2013, Parkmobile introduced PayPal as a payment option. Currently, 6 percent of the transactions use PayPal as a payment mechanism.

Conclusion
The PBC program in D.C. is a tremendous success and has exceeded all expectations. It is one of the most successful PBC launches around the globe. The program has buy-in from all stakeholder agency directors, which is a big reason for its success. Moreover, the business and contracting model aligned the vendor’s goals with the agency’s goals. Opting for a turnkey solution made accountability easy. This complex and high-profile program has changed the face of on-street parking in the nation’s capital. Customer satisfaction is up, turnover and occupancy have stabilized, and revenues have been more in line with the current space inventory.

The PBC success has enabled DDOT to consider asset-lite solutions to parking. The PBC adoption rate has encouraged DDOT to explore the possibility of a meter-less parking solution as part of a pilot in the Chinatown/Penn Quarter area of the city. The popularity of the pay-by-smartphone application has prompted D.C. to look at other solutions where smartphone applications can provide a better and more cost-effective customer experience in parking and other program areas. Two such examples include using an IVR and QR code-based system to report meter outages and a citywide program called “SeeClickFix,” for service requests.

The PBC program for D.C. has yielded the added benefit of a collaborative environment, risk/reward tradeoff-based strategic approach, teamwork, and partnership, and a stronger relationship with all stakeholders. This program has positioned Washington, D.C., as an innovator in on-street parking. The lessons learned and relationships developed from PBC can be leveraged as D.C. continues to innovate and implement cutting edge programs to provide a positive customer experience in the nation’s capital.

Angelo Rao, PE, is citywide parking program manager for the District Department of Transportation. He can be reached at angelo.rao@dc.gov.

Soumya S. Dey, PE, PMP, is director of research and technology transfer for the District Department of Transportation. He can be reached at soumya.dey@dc.gov.