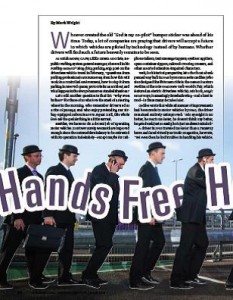 Whoever created the old “God is my co-pilot” bumper sticker was ahead of his time. Today, a lot of companies are praying that drivers will accept a future in which vehicles are piloted by technology instead of by humans. Whether drivers will find such a future heavenly remains to be seen.

As Isaiah Mouw, CAPP, LEED Green Associate, Republic Parking System general manager, observed in his Parking Matters® Blog (blog.parking.org) post on the driverless vehicle trend in February, “Questions from parking professionals are numerous, from how this will work in a controlled environment, how to stop it from parking in reserved spaces, protocols for an accident, and what happens in the always-humorous standoff situations.”

Let’s add another question to that list: “Why even bother?” For those of us who love the smell of a steering wheel in the morning, who remember driver’s ed as a rite of passage, and who enjoy pretending our airbag-equipped Subaru is a 1970 Jaguar XKE, this whole feet-off-the-pedals thing is a little surreal.

Besides, we humans do a decent job of operating motor vehicles. Don’t we? Surely, we must have improved enough since the automobile’s infancy to be entrusted with its operation indefinitely—except maybe for cell-phone talkers, text-message tappers, eyeliner appliers, open-container sippers, railroad-crossing crossers, and other assorted attention-impaired characters.

Well, for historical perspective, let’s check out a book penned way back in 1940 by Norman Belle Geddes (who also designed the Futurama ride in the General Motors Pavilion at the 1939-1940 New York World’s Fair, which featured an electric driverless vehicle). His book, Magic Motorways, is amazingly foreshadowing—and a hoot to read—lo these many decades later.

Geddes wrote that while all manner of improvements had been made to motor vehicles by 1940, the driver remained entirely unimproved: “His eyesight is no better, he reacts no faster, he doesn’t think any better, he gets drunk just as easily, he is just as absent-minded.”

A driver in 1910 traveled no faster than a runaway horse and faced virtually no traffic congestion, he wrote, “Yet even then he had troubles in handling his vehicle. Today the situation is far worse, because he is still the same human being, and yet he has to handle both increased traffic congestion and increased speeds.”

Here’s the part that autonomous vehicle advocates will really like: “No two drivers can be counted upon to behave alike. … Human nature itself, unaided, does not make for efficient driving. … Even when the driver is in full command of the situation, concentrating his whole attention on the highway and the problems of driving, he cannot act instantaneously.”

Leaving aside the disagreements that today’s New Urbanists and historic preservationists would likely have with Geddes-esque motorway planning, the guy’s conclusions about what engineers call “the human factor” remain, annoyingly, spot-on. And therein lies the unsolved challenge facing vehicle visionaries of any era: If we seek safety and efficiency in our transportation and parking systems, how do we eliminate driver error?

Answers range from the minimalist (tweak automotive technology to help drivers do a better job) to the radical (automate driving and turn the human into a passive passenger). While real-life motor vehicle design has long tended toward the former, we’re closer than ever to the latter becoming a viable option.

Long History
Autonomous and semi-autonomous vehicles have lived on drawing boards, run laps around test tracks, and snuck out onto public highways for experimental drives for decades. (Thanks to Google’s efforts, a lot less sneaking will be needed. The company persuaded Nevada to become the first state to allow legal trial runs of autonomous vehicles on its public roads; legislation was passed in 2011, and the resulting regulations were approved in February 2012. California and Florida followed suit. Arizona, Colorado, Hawaii, New Jersey, Oregon and Washington had legislation pending as of February 2013.)

The R&D history could fill an encyclopedia, so consider this the Readers Digest version. The U.S. government conducted driverless vehicle research in the 1980s, as have various universities and agencies since then; the Defense Advanced Research Projects Agency (DARPA) has sponsored a number of autonomous vehicle races dubbed DARPA Challenges. Automakers including Audi, BMW, Buick, Cadillac, Ford, Mercedes-Benz, Nissan, Toyota, Volvo, and, yes, Google, have been pioneering serious advances in the concept and its components for years, with some notable prototypes appearing in the 1990s.

The 2013 International Consumer Electronics Show (CES) featured the most recent iterations from Audi and Toyota. Both companies, however, were shy about using the word “driverless” in the present tense.

“Driverless vehicles are not ready for prime time and there is a lot of work to be done,” says Toyota spokesperson Cindy Knight. She says the modified Lexus LS 600h hybrid (dubbed an “Advanced Active Safety Research Vehicle”) displayed during CES is only a test platform and not a vehicle they plan to sell in its present form. All sorts of questions and regulatory hurdles have yet to be addressed, she says, including parking-related issues.

Audi prefers to describe its technology as a package of “driver assistance systems” that enhance convenience and safety. As a spokesperson explained during CES, “Assistance systems are rapidly increasing in importance. In the near future, we will see systems that are able to assume the complete driving task for a limited period of time if so desired by the driver. Audi refers to this concept as piloted driving.”

Whatever their names, taken together, the aim of various carmakers’ systems boils down to some simply-stated objectives: make the car hyper-aware of its surroundings; make it react to changes in those surroundings when the driver does not; and build on existing systems (such as cruise control) to extend their capabilities.

Thus Audi speaks of features such as “adaptive cruise control” (which can come with or without a Stop & Go function), “active lane assist,” “side assist,” “night vision assistant,” “park assist,” “camera-based speed limit display,” “pre sense front, pre sense rear, and pre sense plus,” and others.

Nissan is testing a system to enable a vehicle to detect instances when its human driver fails to notice or react to another vehicle or a pedestrian in its path and automatically steer clear of the danger (also checking to see if the adjacent lane is safe to swerve into). Cadillac’s SuperCruise system—which automates control of acceleration, braking and steering so the driver can let go of the wheel—could (no guarantees) become a consumer reality for the 2014 model year.

Audi, BMW, Ford, Land Rover, Mercedes-Benz, and Toyota/Lexus also have auto-park models. Some are demos while others are commercially available.

“We are just seeing a glimpse of how connected vehicles will impact parking,” says David Cummins, senior VP and managing director of parking at Xerox and co-chair of IPI’s new Smart Parking Alliance (see p. 50 for more on this). “Aside from bumper sensors that help you pull into a parking space, most of the technology assisting parking today is on smartphones. That will change as the vehicles themselves become more intelligent. Vehicles will not only tell us how to get from point A to point B, they will also take us to an open space and pay the parking fare. Smart Parking will be taken to the next level with smarter cars. Imagine a parking experience that requires little to no driver input.”

“Automation and the Internet of Things will play a fundamental role in the future of parking,” says Kelly Schwager, chief marketing officer at Streetline, Inc. “Whether it is parking spaces that proactively share data and speak to motorists via applications or in-car navigation systems…the ability to pay for parking automatically just by pulling into a parking spot…cars that proactively provide audible guidance to available parking based on pre-set preferences such as price or location…or a driverless vehicle that can park on its own while the driver enjoys a morning cup of coffee, it is fascinating to consider the impact new technology will have on parking even just a few years from now!”

“The parking garage is the most important building type of the 20th century, and I believe it will continue to be at the cutting edge, shaping our future,” says McDonald. “When you take a step back and look at how mobility interacts with the built environment, how land use choices facilitate or impede humans’ ability to get where they want to go, you start to see all kinds of synergistic possibilities. For example, driverless cars could interface with parking facilities to help you seamlessly connect with automated transit networks, and these mobility devices will eventually merge in some dense locations.

“Since a driverless car could let its occupants out at the parking entrance and then go park itself, the garage would have no pedestrians in it, which means it could be configured very differently,” she says. “That opens up new architecture and design options.”

Experts say parking professionals can likely anticipate no required major renovations to accommodate driverless vehicles. “We are confident our cars will have all of the sensors and processing power to accomplish piloted garage parking without sensors in the garages themselves,” said Audi of America, Inc. Corporate Communications Manager Brad Stertz. “Where those garage sensors may be beneficial in the future is for functions like detecting specific parking spaces that can be reserved in advance as they become available. Other cars may need the sensors, but we are proceeding with the approach that they should be on the car to avoid waiting for the uncertain timing of infrastructure upgrades. We utilized sensors in the garage for our CES demonstration strictly as a precaution. (As for) when we would be sensor free, we’ve said most of these functions would be possible within a decade.”

Another possibility might also confront parking operators, though: A driverless car could avoid the parking garage altogether and simply go home, returning later to retrieve its owner, depending on the distances involved.

For its part, the motoring public is ambivalent about the notion of completely ceding driver control, notwithstanding its perennial frustration with traffic congestion and distracted-driver collisions. Opinion surveys by J.D. Power and Associates (2011) and Accenture (2010) indicated significant support for the concept, albeit with variations depending on age, gender, and income. A much smaller May 2012 survey by Rasmussen Reports, however, found that 38 percent of American adults “believe it is at least somewhat likely that these so-called autonomous cars will be able to operate safely on roads and highways,” but 48 percent think they won’t be safe, and 14 percent are not sure.

Comfortable or not, the future seems to be hurtling toward drivers like a dinosaur-obliterating asteroid. True autonomous motoring is years away. Recent roll-outs of automated functions are meant to gradually test and nurture driver acceptance through the incremental introduction of new technologies. Thus, we face a motoring life increasingly modified (not controlled) by technology, both on the road and in parking facilities.

Maybe one day drivers will plaster a new version of that bumper sticker on their car: “Google is my co-pilot.” But, early adopters will likely be heard uttering an urgent prayer: “Dear God…I hope this technology really works!”

Mark Wright is a freelance writer in Rockville, Md. He can be reached at mark@wrightscontent.com or 301.651.7735.