LOGIN
Search
Home / Resources / Frontline / In the Blink of an Eye 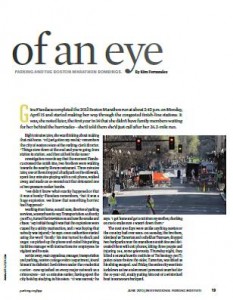 Gina Fiandaca completed the 2013 Boston Marathon run at about 2:42 p.m. on Monday, April 15 and started making her way through the congested finish-line stations. It was, she noted later, the first year in 14 that she didn’t have family members waiting for her behind the barricades—she’d told them she’d just call after her 26.2-mile run.

Eight minutes later, she was thinking about making that call home. “I’d just gotten my medal,” remembers the City of Boston Office of the Parking Clerk director. “Things slow down at the end and you’re going from station to station. And then all hell broke loose.”

Investigation records say that the moment Fiandaca crossed the finish line, two brothers were walking towards the nearby Forum restaurant. Three minutes later, one of them dropped a backpack on the sidewalk, spent four minutes playing with a cell phone, walked away, and made an 18-second call that detonated one of two pressure cooker bombs.

“We didn’t know what exactly happened or that it was a bomb,” Fiandaca remembers, “but it was a huge explosion. We knew that something horrific had happened.”

Working from home, Ronald Ross, director of parking services, Massachusetts Bay Transportation Authority (MBTA), turned the television on and saw the smoke and chaos. “My initial thought was that the explosions were caused by a utility malfunction, and I was hoping that nobody was injured,” he says. Once authorities started using the word “bomb,” his fear turned to shock and anger. He picked up the phone and called his parking facilities manager with instructions for employees: be vigilant and be safe.

Not far away, Paul Cappadona, manager, transportation and parking, Boston College Police Department, found himself in disbelief: he’d driven under the Prudential Center—now splashed on every major network as a crime scene—not 45 minutes earlier, having spent the city holiday studying in his office. “It was surreal,” he says. “I got home and got a call from my mother, checking on me to make sure I wasn’t down there.”

The next five days were unlike anything Boston or the country had ever seen. On Monday, the brothers, identified as Tamerlan and Dzhokhar Tsarnaev, dropped two backpacks near the marathon’s finish line and detonated them with cell phones, killing three people and injuring 264, some grievously. Thursday night, they killed a Massachusetts Institute of Technology (MIT) police officer before the older, Tamerlan, was killed as his sibling escaped. And Friday, the entire city went into lockdown as law enforcement personnel searched for the 19-year-old, finally pulling him out of a winterized boat in someone’s backyard.

While no one is ever prepared for something as random and destructive as a terrorist attack, parking and transportation officials in Boston say that, looking back, their training, practice, and clear procedures for emergencies offered direction and a bit of calm in the chaos that followed the April 15 bombings. That’s a good thing, they say, because it became very clear very quickly that while the rest of the city could shut down, they had to keep people moving.

Reactions
Ross says one of his first reactions after hearing that something had blown up at the marathon finish line was to pick up the phone. “I immediately contacted LAZ Parking, the company that managers the MBTA parking facilities, and instructed them to inform their employees, especially those working in the garages, to be vigilant and report anything suspicious to MBTA police,” he says. “I also told them to make sure their employees stay safe.” Garages stayed open, he says, but under very watchful eyes.

Near the finish line, Fiandaca says she made her way two blocks to the buses that took runners to and from the race. “Once you got out of the finish area, people didn’t know what happened,” she says. “They knew something happened, though. I’d planned to meet up with a running group about half a mile away from the finish line in downtown Boston. Walking there, I saw people looking at their phones in shock, just dazed.”

She walked to her office where she found a television on but no phone service. “People were frantically trying to get through to me,” she says. “I could read text messages, but not respond to them.”

Officers at her office’s marathon command center, around the corner from the finish line, immediately started working with law enforcement officials to get people away from the scene, which wasn’t a simple task.

“The transportation department people were called in,” she says. “All the streets in the surrounding area were cleared because of the event, so it was a case of keeping those streets clear and, in ensuing days, managing the public notification effort as streets became available for residents and businesses.” That included tourists and others who’d traveled to town for the race and were suddenly unable to get back to their hotels or their cars—some, for days.

“We had to show some considerations in terms of parking enforcement in the days that followed,” she says. To help, her office worked with local community groups and the media to distribute information on parking and roads as quickly as possible, on as many channels as they could access.

“People were glued to their televisions and the internet for updates,” she says. “We kept pushing out as much information as we could.”

At Boston College, Cappadona worried about his shuttles. “Our shuttle route usually shuts down to accommodate the marathon,” he says. “My immediate concern was that I had people who needed to get back to their residence halls as the city was shutting down. We didn’t know if it was safe to run the routes for them. We worked with the police department and emergency personnel, and it really was minute-to-minute, with everything changing constantly.”

Shuttles were held in place until well after the 5 p.m. time they normally run back to campus on marathon day, he says, but finally were given the O.K. to start rolling.

As the week went on, parking officials say their operations slowly went back to as normal as possible, with everyone on edge. Friday morning, that all changed again.

The Manhunt
“Friday morning at 5 a.m., I received a phone call from Randy Miller, the regional general manager for LAZ Parking,” says Ross. Miller called to tell Ross about the manhunt. Shortly after, MBTA operations personnel called to tell Ross that operations, including garages, would be shut down for the day. He closed his facilities, but asked staff to remain onsite to keep an eye on things.

Fiandaca had a similar experience, and kept her staff onsite until about 2 p.m. “They weren’t prevented from leaving before then,” she says. “but the prudent thing to do was to stay in place.” She’d been in touch with police all week, she says, and had given law enforcement access to cameras in her facilities, including license plate recognition systems, along with information on the suspects’ parking violations and registration records.

Her department coped with daily changes until the last streets opened on April 24—nine days after the bombings—and then worked to help people as they returned to their homes and offices. “There was a lot of clean-up for those people,” she says. “They were locked out for more than a week. There was no trash going out and they couldn’t get in to clean up damage from the actual bomb.” That meant working to clear space for large trucks and vehicles curb-side for well more than a week.

At Boston College, Cappadona was under similar lock-down orders, but he also had his students to worry about.

“I knew at some point, the switch would be flipped and we’d be open and people would want to start moving around,” he says. “The drivers work out of a facility that’s about a half-hour or 45 minutes away from campus, so we asked them to stay. I told them to order pizza or play cards or do whatever they needed to do, but to please wait there. God forbid there was an evacuation. We didn’t know where this guy was or how close he might be, so we had to keep everybody on standby.”

Preparations and Lessons Learned
While parking and transportation professionals in Boston say there’s no way to really prepare for something like an act of terrorism, they agree that having emergency procedures in place made a big difference in the way they reacted to the situation.

While Ross says his staff is still evaluating what happened, “good communication was paramount for us. All departments stayed informed, which allowed us to follow the plan effectively. My number-one recommendation would be to make sure the lines of communication are wide open between all affected departments. When everyone is working together, you can get through emergency situations more efficiently.”

Fiandaca agrees. “It really highlights the importance of communication between departments and having a chain of command,” she says. “When this happened, our police commissioner led efforts on this end of things. Once they determined it was a terrorist attack, the FBI and other agencies were called in. But there was such a spirit of cooperation in terms of providing access to our streets for law enforcement, even though those streets were not available to residents or businesses.”

“People came together,” she says. “There were no egos involved. There were no turf battles. Everyone wanted to get the city back up and running,” she adds
Cappadona says that was also true at Boston College. “We had good policies and procedures in place and people were dedicated to making the right decisions,” he says. And that was also true for students who couldn’t get where they wanted all the time.

“They couldn’t have been better,” he says. “Everybody really understood the seriousness of what was going on and the uniqueness of the situation. This was not anything anyone had ever experienced, and people were fantastic. You know, in parking and transportation, people are often quick to complain. We didn’t have one complaint. Not one.”

Ross agrees. “What touched me the most was the compassion of MBTA Officer Richard Donahue,” he says. “He was critically injured during the shoot-out early Friday morning. But when he recovered enough to speak, he spoke only of MIT officer Sean Collier [who was killed].” The two were friends, says Ross, and Donahue believes Collier played a part in saving his life.

Cappadona said it made him think more about his work and what it means.
“It’s parking,” he says. “You don’t think about how much of a role it plays. You see through things like this that it’s an integral part of the community. Safety and security are the primary concerns, and we are a piece of that.”

Kim Fernandez is editor of The Parking Professional. She can be reached at fernandez@parking.org.