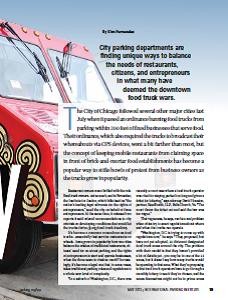 The City of Chicago followed several other major cities last July when it passed an ordinance banning food trucks from parking within 200 feet of fixed businesses that serve food. Their ordinance, which also required the trucks to broadcast their whereabouts via GPS devices, went a bit farther than most, but the concept of keeping mobile restaurants from claiming space in front of brick-and-mortar food establishments has become a popular way to stifle howls of protest from business owners as the trucks grow in popularity.

Restaurant owners were thrilled with the rule. Food truck owners…not so much, and in November, the Institute for Justice, which bills itself as “the nation’s leading legal advocate for the rights of entrepreneurs,” sued the city on behalf of three entrepreneurs. At the same time, it released two reports it said offered recommendations to city officials on developing conditions that would let the trucks thrive (ij.org/food-truck-freedom).

It’s become a common conundrum as food trucks—essentially fast-service restaurants on wheels—have grown in popularity: how can cities balance the wishes of traditional restaurants, citizens’ need for on-street parking, and the rights of entrepreneurs to start and operate businesses, when the three seem to clash so much? Increasingly, it’s become a legal one that, in some cases, takes traditional parking rules and regulations to a whole new level of complexity.

“In a suburb of Washington, D.C., there was recently a court case where a food truck operator was cited for staying parked too long and given a ticket for loitering,” says attorney David Houston, partner, ReedSmith, LLP., Falls Church, Va. “The court threw the ticket out and said the law was too vague.”

That vagueness, he says, can be a real problem when cities try to enact regulations about where and when the trucks can operate.

“Washington, D.C. is trying to come up with regulations now,” he says. “They proposed, but have not yet adopted, 23 different designated food truck areas around the city. The problem with their model is that they haven’t provided a lot of details yet—you may be in one of the 23 zones, but it doesn’t say how many trucks would be operating in that zone. What they’re proposing is that food truck operators have to go through a monthly lottery to see if they’re chosen, and the zones themselves might not be in prime areas where the trucks may be the most successful.”

Still, there are cities that have been successful in striking a balance between the trucks and traditional restaurants. In others, the battles rage.

Balance
Doug Povich has operated the Red Hook Lobster Pound truck in and around Washington, D.C. for the last two and a half years; he’s also chair of the Food Truck Association of Metropolitan Washington. Parking regulations, he says, are the biggest thing on truck owners’ minds right now.

“It’s a huge issue,” he says. “The newly-proposed regulations have a whole new
approach to parking, and we have some major issues with them.”

That’s not to say the current system is working perfectly. Right now, food trucks are allowed to park in metered spaces for as long as the meter allows; when the meter runs out, the truck has to move. But there’s a catch.

“Vending rules say we can’t stop at a parking location unless we already have a line formed,” he says. “We can’t stay unless we have customers in line. If there’s no one at the truck, we have to move. It’s an old ice cream truck rule, but it’s still enforced.”

He says his association asks its members to abide by a 10-item code of conduct designed to allow everyone to make a living. “One of those things is that you shall endeavor not to park in front of a restaurant that serves the same food you do,” he explains. “That’s a voluntary thing. We don’t want to upset our restaurant friends, and a lot of our trucks aspire to be restaurants, so they understand.”

Still, he says, from the truck owners’ perspective, many parking regulations go too far. “It always gets couched as the food trucks vs. the restaurants,” he says. “I hate when that happens. We think there’s an opportunity for a win-win for everyone.”

Finding Answers
Gary Means, CAPP, executive director, Lexington & Fayette County Parking Authority, Lexington, Ky., says the food truck phenomenon is a relatively new one for him, and he had no idea how deep the water was when he waded in to try and strike a balance between parking needs and fair competition.

“It is unbelievably more complicated than it seems at first,” he says. “I thought there would be a quick fix.”

The first issues he saw were in neighborhoods, where food trucks would park outside corner gas stations or strip shopping centers, play music, and launch what soon became a party.

“There was loud music and people were hanging out,” he says. “The neighborhoods felt it was aggressive and imposing on their quality of life.”

About 18 months ago, the city established a task force to deal with the issue and to figure out how to balance the parking needs of the trucks with the needs of citizens and restaurants. “I have always said meters are for turnover,” says Means. “They are there to help restaurants and other merchants by providing turnover and open spaces. To see these spaces occupied by trucks instead of by people who are there to do business flies in the face of what we’re about.”

At press time, Means said a pilot program had been proposed to establish four downtown areas where trucks could rotate: no truck could stay longer than a week, and they were not permitted to visit the same spot for 30 days after that week ended. Legislation was also being drafted that would let trucks park in metered spaces after 5 p.m., and that would allow private parking lot owners to make their own arrangements to host the trucks as they wished.

“My perspective has been to find locations where the sidewalks are wide enough and they’re not too close to brick and mortar restaurants, and give them hours of operation where they fit a need,” he says. “That’s a perfect fit—we can allocate areas like loading zones or metered spots for that use. That’s where we’ve left it for now.”

He’s not the only parking professional with those sorts of thoughts. In Seattle, Parking Operations & Traffic Manager Mike Estey says regulations established 18 months ago seem to have struck a balance and worked out well.

“We have an active food truck scene in Seattle,” he says. “Our staff and policy makers got together a few years ago to make this work in a way that’s fair to truck vendors and brick and mortar folks, and give some consistent guidelines and regulate the use of our on-street parking.”

Food trucks—now recognized as curb-space vendors—receive permits from the Seattle Department of Transportation after submitting an application and sketches for a proposed parking spot. Staff then goes to the site to make sure it makes sense and isn’t too close to either a restaurant or a school, and then the truck owner provides public notice to existing block residents and tenants of his intent to do business there. Once that’s all done, a permit is issued for that specific spot, which belongs to that truck exclusively on certain days and during specific four-hour blocks of time.

“Outside of those four hours, we still allow people to park in the space,” Estey says. “During that four-hour block, the space belongs to that vendor.”

To date, about 20 permits have been issued to food trucks, and several have secured more than one spot, which allows their trucks to appear in different places throughout the week.

“If you walk around downtown Seattle, you’ll see the zones and the trucks in them all the time, usually with a pretty decent line,” Estey says. “It’s growing quickly.”

“So far,” he says, “there have been very few citizen complaints about the system. We have a little more than 12,000 paid parking spaces in Seattle. We’re talking about 20 spaces here. We want to be mindful of requests so they don’t bunch up in certain places, but so far, that hasn’t been an issue.”

Reserved Spaces
In Las Vegas, regulations prohibiting food trucks from parking within 150 feet of restaurants were passed last year, but so far, they’ve not been enforced. Parking Services Manager Brandy Stanley says that all things being equal, it’s for good
reason.

“If we left it at that, food trucks would not be able to do business downtown at all,” she explains. And while the regulations were drawn up in response to restaurant complaints about trucks taking business from them, they weren’t fair to the trucks, either.

“Quite frankly, when the restaurants are open, unless there’s some big, special event, the trucks don’t show up very much,” she says. “They like to show up at 2 a.m. when the restaurants are closed and people are coming out of bars.” Because that doesn’t hurt restaurant business, the city decided to go with it and drew up new regulations that will allow mobile vendors to reserve metered parking spaces downtown at a cost of $5 per hour.

“We developed this in conjunction with our food vendors,” says Stanley. “It wasn’t our idea—it was their idea. We hope they’ll like what we’re proposing to put in place.”

She says new meters have been ordered for those designated spaces that will let the trucks input their license plate numbers to validate their reservation and pay. “We know for a fact they’re there,” she says. At the same time, information on where each food truck is will be broadcast to an app as plate numbers are entered. Residents and visitors can then use their smartphones to find the mobile restaurants. Stanley says the system should be up and running this summer.

For now, these proposed regulations seems to have eased a lot of long-standing tension between restaurants and food trucks and the parking department.

“Some of our restaurant owners were not happy about truck vendors being out at all,” she says. “It’s a different model and a perceived inequity—it’s really two different cultures.”

“There is still some tension,” she says, “But it’s not as bad as it used to be.”

Kim Fernandez is editor of The Parking Professional. She can be reached at fernandez@parking.org.