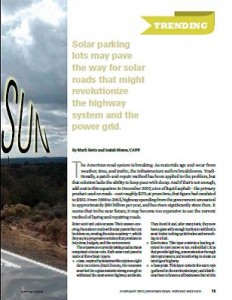 The American road system is breaking. As materials age and wear from weather, time, and traffic, the infrastructure suffers breakdowns. Traditionally, a patch-and-repair method has been applied to the problem, but that solution lacks the ability to keep pace with decay. And if that’s not enough, add cost to this equation: in December 2007, a ton of liquid asphalt—the primary product used on roads—cost roughly $175; at press time, that figure had escalated to $592. From 1998 to 2003, highway spending from the government amounted to approximately $80 billion per year, and has risen significantly since then. It seems that in the near future, it may become too expensive to use the current method of laying and repairing roads.

Enter Scott and Julie Brusaw. Their answer: covering the nation’s roads with solar panels that can be driven on, creating the Solar Roadway™, which they say is a progressive solution that promises to help lives, budgets, and the environment.

The Brusaws are currently testing road surfaces comprised of solar cells. Each solar road panel is made of three basic layers:

Glass. Inspired by indestructible airplane flight data recorders (black boxes), the Brusaws searched for a glass material strong enough to withstand the most severe highway accidents. They found it and, after many tests, they now have a glass with enough traction to withhold a semi-trailer locking up its brakes and screeching to a halt.

Electronics. This layer controls a heating element to melt snow or ice, embedded LEDs that provide lighting, communication through microprocessors, and monitoring to create an intelligent highway.

A base plate. This layer collects the sun’s rays (gathered in the electronics layer) and distributes them to homes and businesses that will be connected to the solar highways that help power other commodities—cable, internet, lights, heating, and air.

In August 2009, the Solar Roadway™ project was awarded a $100,000 research contract from the Department of Transportation to compile academic research and build a prototype. Two years, later Solar Roadways™ received a follow-up contract of $750,000 to build none other than a solar panel parking lot.

The Solar Roadways™ team is striving to make their products as green as possible. They are working to incorporate recycled materials such as glass and plastic and to make the panels recyclable at the end of their lifecycle. Each panel is expected to last about 20 years, mainly because the solar cells start to lose their effectiveness after that much time. Panels can either be refurbished with new state-of-the-art solar cells added, or recycled into aggregate to use for new panels or as a base layer for new construction. Scott Brusaw estimates that even using conservative calculations, if Solar Roadways™ replaced all of the paved surfaces in the lower 48 United States, they could produce nearly three times more power as is currently consumed in the country each year.

This method of energy production would be cleaner and more cost efficient, the Brusaws say, than our current system, and there are aesthetic benefits as well. The Solar Roadway™ relies on load cells and other sensors that transmit information to a microprocessor, which uses LEDs to create messages and alerts for drivers. For example, if an animal or pedestrian ran onto the road, the sensors would detect the weight and flash a warning to oncoming traffic, resulting in safer travel conditions.

If an accident rendered a panel or several panels useless, the remaining panels would transfer data around the damaged spots, creating an instant detour for drivers. The solar highways would also be a modular road, connecting like a Lego set. And with power lines gone and buried in the ground to be connected to the smart roads, the landscape could regain some of its natural splendor.

“The Federal Highway Administration is encouraged by the modularity of the system,” says Scott Brusaw. “They’ve learned that we’re losing about $165 billion a year from you and me sitting in traffic jams due to road repairs. That’s loss of productivity—gas is just burning for no reason.” The ability to quickly replace damaged road sections could drastically cut down on maintenance time and get traffic moving again much faster.

He says the roads will also reduce the amount of fossil fuels required to fuel our transportation fleet: Electric vehicle owners will be able to plug up and charge from parking lots and rest stops. Taking it a step further towards technology currently in development, electric vehicle owners will eventually be able to charge their vehicles while they drive on without even plugging in.

The Parking Lot
“Conventional wisdom about our industry being part of the sustainability problem is being turned on its head as we take a leading role in advancing sustainability on college campuses, in downtowns, and event and shopping venues around the world.  And for the parking industry to continue to make strides towards a more sustainable future we must capitalize on knowledge transfer from other industries and efforts like the Solar Roadways project.”
– Casey Jones, CAPP, IPI chair

Outside their laboratory in Idaho, the Brusaws are building the first solar parking lot. Constructing the parking lot in their own backyard will enable them to monitor the technology in a controlled environment at all times. They will present some of their findings at the 2013 IPI Conference & Expo in Fort Lauderdale in May (visit IPIConference.parking.org).

There are many benefits to a solar parking lot, the Brusaws say, and energy production is where it begins. If a Wal-Mart, for example, were to invest in a solar parking lot, the Brusaws estimate that lot would produce more than 10 times as much energy as the Wal-Mart uses in a year—and that’s with vehicles parked in the parking spaces. Many parking lots will be able to generate more energy than the buildings they’re connected to.

The biggest detriment to electric vehicles is the range anxiety caused by the vehicles’ limited battery life. The Brusaws say that if the Solar Roadways™ team were to turn every highway rest area parking lot into a solar parking lot, an electric vehicle owner would theoretically be able to drive his or her electric vehicle from Seattle to Miami on battery power alone, by recharging at different rest areas across the country.

These are reasons the Brusaws believe we will see solar parking lots before solar roads. Vehicles on parking lots move slowly, which provides a perfect testing ground. Their glass panels consist of heating elements that can melt away snow or ice, negating the need for expensive plowing costs. In addition, the LED lights make up the parking space lines, so the panels mean there’s no need to restripe a parking lot every year. Parking facility owners would be able to change their lots’ layouts with a press of a button on their laptop or cell phone, adding more spaces for disabled drivers or reserved spaces for VIP patrons instantly.

Parking lot owners will be able to advertise using the LEDs embedded in the parking lot panels. A grocery store could advertise the price of a pound of bananas on that day. Stadium parking lots could put their team logos in the parking lot surface or directional arrows directing traffic to the next space. Imagine what on-street parking could do with solar pavement. The load sensors in the panels could communicate real-time data to help large municipalities with on-street occupancy to master demand-based pricing operations.

Speed Bumps
Despite so many potential benefits, there are equally impressive obstacles standing in the way of solar roads. Local governments are cutting budgets and looking to save every dollar possible, and a project with such a substantial price tag (the Brusaws don’t have an exact cost per panel yet, but no one doubts it will be more expensive than asphalt) may seem impossible.

These questions and more will be addressed during the Brusaws’ General Session presentation at the 2013 IPI Conference & Expo in Fort Lauderdale.

Isaiah Mouw, CAPP, is general manager of Republic Parking System. He can be reached at imouw@republicparking.com.

Mark Botts works for the Mercer County, W.V., Board of Education. He can be reached at markstevenbotts@gmail.com.