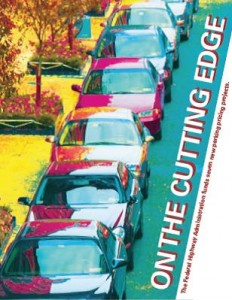 The U.S. Secretary of Transportation recently announced discretionary funding awards for 12 different programs, including the Value Pricing Pilot Program (VPPP). The VPPP awards include seven parking pricing projects. Before this announcement, the Federal Highway Administration’s (FHWA) comprehensive Contemporary Approaches to Parking Pricing: A Primer (visit parking.org/fhwaprimer to download a copy) made its debut at the 2012 International Parking Institute Conference & Expo in Phoenix in June, where a panel discussed the primer and the strategies it includes; FHWA contributed a Parking Matters® blog post about it shortly thereafter (visit blog.parking.org).

While looking back at and studying all of the innovative parking pricing strategies that have been deployed is very much a worthwhile exercise, FHWA’s recent funding announcement shows that it recognizes the importance of continuing to advance new parking pricing strategies at the same time it encourages the institutionalization of approaches that have already been successfully demonstrated.

A discussion of the newly-announced FHWA-funded projects follows, but a little background and context might be helpful first. As IPI members know, local governments usually manage and price on-street and municipal parking—it’s not something in which the federal government generally gets involved. That doesn’t change with federally-funded pilots, where the federal government is sometimes a partner with local governments to push the innovation envelope. Local governments have applied for federal assistance, typically in response to a solicitation and often together with state governments and private-sector partners that implement the
projects.

Better Information for Improved Policy Decisions
Some cities and regions seem to have the support needed to institute parking pricing, but lack the technical tools to do it well. The San Francisco Metropolitan Transportation Commission is being funded to create a parking supply and pricing regional database and analysis tool to assess a range of innovative, locally-determined policy scenarios. The proposal garnered 15 support letters, most from area local governments, showing that the database and analysis tool that will be created is in high demand.

The City of Cambridge and the Massachusetts Institute of Technology (MIT) have been funded to evaluate the effectiveness of a range of already-deployed parking pricing strategies by area employers and to provide financial incentives to deploy and evaluate additional cutting-edge strategies. Cambridge’s Parking and Transportation Demand Management Ordinance (PTDM) that was passed in 1997 requires large developers to reduce single-occupant vehicle mode share by 10 percent from 1990 levels. To meet this goal, developers must choose a set of transportation demand management (TDM) measures to implement. Subsidized transit passes and parking charges of some sort are commonly included. There are more than 50 PTDM plans in place that affect more than 35,000 employees. Monitoring and annual reporting are required, so there is much to learned from this project.

Expanding and Developing New Types of Markets for Parking Pricing
PARK Smart, New York City, was awarded funds to build off of a previous pilot that introduced higher on-street meter rates during peak times in a few neighborhood retail areas to increase vehicle turnover and allow more vehicles to access existing on-street parking. The new project will engage communities and offer tailored pricing strategies in up to 25 new neighborhood retail corridors that are reflective of both parking demand and localized political conditions.

Park-and-ride facilities provide users an alternative to driving into Seattle, but the park-and-ride lots in King County (where Seattle is located) fill early, forcing schedule-constrained commuters to drive into the city despite other intentions. Pricing such existing parking capacity isn’t politically viable, but pricing new capacity—if it were affordable to provide—is. By arranging for commuters to pay multifamily neighborhoods with available daytime parking to use those spaces, fewer drive-alone trips to downtown Seattle are expected. In particular, this project’s focus on opening up additional parking spaces in multifamily neighborhoods (along transit routes into downtown) will introduce a new market of users to public transit, while pricing of such parking will help ensure its continued availability.

FHWA previously funded the nation’s largest and most sophisticated performance-parking program to date: San Francisco’s SFpark, which includes 6,000 on-street parking spaces (and more than twice that number of municipal garage parking spaces) to achieve an on-street parking occupancy goal of 60 to 80 percent by charging rates that vary by geography and time of day. FHWA’s most recent funding announcement builds off of the success of SFpark by supporting two related, but distinct, efforts. First, for other cities to be able to directly benefit from the work of SFpark, funding is being provided to develop technical specification documents other cities need to implement similar programs. Second, while SFpark has shown great promise in demand-based pricing in retail corridors, using performance parking to manage on-street parking in residential neighborhoods has run into political obstacles, including in San Francisco. A pre-implementation project is being funded to identify and assess options for performance-based parking in residential areas there, with the hope that such a study will lead to the implementation of a technically robust and politically palatable approach that prices residential parking to achieve parking availability objectives and reduce congestion.

Finally, to demonstrate efficient and cost-effective deployment of the SFpark strategies in a new city, FHWA has awarded funding to Los Angeles for its LA Express Park performance parking system implementation in Westwood Village, a neighborhood that includes 543 on-street and 366 off-street parking spaces. As with SFpark, this system will use in-roadway sensors to monitor occupancy and adjust prices to achieve performance targets for parking availability, which is expected to reduce congestion by both encouraging alternative mode access and allowing motorists to park quickly instead of having to circle for parking.

Developing and Testing the Most Advanced Parking Pricing Strategy
FHWA is funding the first pilot of dynamic parking pricing for metered curbside spaces to improve parking availability. This will take place in a congested downtown business district and abutting popular retail and tourist areas in Washington, D.C. This project will develop a variable pricing rate structure and follow up with a dynamic pricing algorithm for each of three types of parking users: passenger cars, freight and commercial vehicles, and intercity buses. As with SFpark, various channels of real-time parking availability and pricing information will be made available. The project is expected to help reduce congestion (25 percent of which, according to a 2004 D.C. study, can be attributed to circling vehicles in search of open on-street parking) by making more parking available so bus drivers have an alternative to circling when waiting for returning passengers and commercial vehicle drivers are able to find legal spaces instead of double parking and blocking traffic.

Previous and ongoing FHWA studies show that capable parking professionals have successfully implemented cutting-edge parking pricing strategies, which are leading to less driving and congestion and improved parking availability when people choose to drive and park. The seven newly-funded parking pricing projects are expected to add to the recent successes highlighted in FHWA’s Contemporary Approaches to Parking Pricing: A Primer and expand upon the repertoire of strategies available to parking managers.

For more on the Value Pricing Pilot Program, visit fhwa.dot.gov/discretionary/2012vppp.cfm.

Allen Greenberg is senior policy analyst with the U.S. Department of Transportation Federal Highway Administration Congestion Management and Pricing Team. He can be reached at Allen.Greenberg@dot.gov or 202.366.2425.