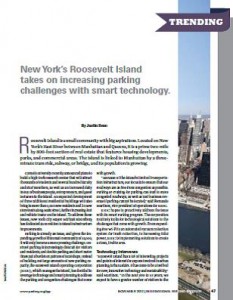 Roosevelt Island is a small community with big aspirations. Located on New York’s East River between Manhattan and Queens, it is a prime two-mile by 800-foot section of real estate that features housing developments, parks, and commercial areas. The island is linked to Manhattan by a three-minute tram ride, subway, or bridge, and its population is growing.

Cornell University recently announced plans to build a high-tech research center that will attract thousands of students and several hundred faculty and staff members, as well as an increased daily influx of businesspeople, entrepreneurs, and guest lecturers to the island. An expected development of three additional residential buildings will also bring in more than 1,000 new residents and 30 new storefronts along Main Street, further increasing foot and vehicle traffic on the island. To address these issues, New York City Mayor Michael Bloomberg has dedicated $100 million to island infrastructure improvements.

Parking is already an issue, and given the impending growth of this small community of 12,000, it will only become a more pressing challenge. On-street parking is increasingly difficult for visitors and residents, and double parking and short meter times put a burden on patrons of local shops. Instead of building out large amounts of new parking capacity, the Roosevelt Island Operating Corporation (RIOC), which manages the island, has decided to leverage technology and smart planning to address the parking and congestion challenges that come with growth.

“Because of the island’s limited transportation infrastructure, our focus is to ensure that our roadways are as free from congestion as possible. Parking or cruising for parking can lead to more congested roadways, as well as lost business revenue if parking cannot be located,” said Fernando Martinez, vice president of operations for RIOC.

RIOC hopes to proactively address the issue with its Smart Parking program. The corporation routinely looks for technological solutions to the challenges that come with growth. From expanding free Wi-Fi to an automated vacuum collection system for trash collection, to harnessing tidal power, RIOC is implementing solutions to create a clean, livable area.

Technology Intervenes
“Roosevelt Island has a lot of interesting projects and points of interest for anyone involved in urban planning/urban affairs. It has come to be a test bed for new, innovative technology and sustainability,” said Martinez. “In the next five to 10 years, we expect to have a greater number of visitors to the island…utilizing the transportation network, shopping in the stores, and taking advantage of our beautiful parks and public spaces. Many will come to the island by public transit; however, we also anticipate that many will be looking to park vehicles as well.”

Due to the scarcity of land to use for new parking, the island needs to optimize the use of existing parking infrastructure by enacting smart pricing policies. RIOC looked into various smart parking technologies and decided to implement sensor-based parking guidance and management technology that works with an app that provides residents and visitors with guidance to available parking spaces. The app also informs drivers of prices, and payment options, and allows them to make mobile payments and reserve spaces in local garages.

Using the latest technology, RIOC will have the ability to better assess the dynamics of parking on the island using analytics and real-time applications that can drive decisions to add more parking or change regulations and pricing to encourage drivers to better use the available spaces. Garages on Roosevelt Island can publish their location information—including current occupancy, reservation availability and special promotion—to drivers via a parking management software system.

“We plan to install sensors in a majority of our on-street parking in order to collect data about parking behavior and to identify trends,” said Martinez. “We will also launch Parker, which allows folks to see where parking is available to guide parkers to open spaces. Once we have some data to work with, we will look at pricing for both on-street and off-street parking. We will also evaluate and adjust the span of time that folks can park for.”

Snow Days
RIOC officials note that they were initially concerned about the effect that harsh weather conditions in New York could have on the equipment. A major component of the test was to see if the sensors would work buried under ice, snow, and road salt through the winter, and the performance, says Martinez, was “fantastic.”

“We plan to use the data we collect from the sensors to set an effective pricing plan to improve availability of short-term parking where it’s needed. We will in turn reduce congestion on Roosevelt Island because less folks will be cruising looking for a space, they will know if spaces are available and where they are. Additionally, there will be more spaces available because long-term parkers will be taking advantage of attractive rates at Motorgate [a local parking garage]. Much of the improved availability of spaces can be attributed to efficient enforcement,” he says.

Martinez adds, “Our property manager for Shops on Main has stressed that an effective parking policy is key to a successful commercial corridor. Smart Parking can improve sales for local businesses, reduce congestion on our only street—Main Street—and generally make parking easier for residents and visitors alike.”

The Space Search
Independent studies show that around 30 percent of city traffic is caused by drivers looking for a place to park. Moreover, a study by UCLA Professor Donald Shoup found that in a 15-block area of Los Angeles over a year, motorists drove an excess 950,000 miles, wasting 47,000 gallons of fuel and emitting 730 tons of carbon dioxide.

The Parking Pain Survey published by IBM in 2011 revealed that finding parking is a major problem for drivers in the U.S.—and globally—that leads to an average of 20 minutes spent looking for parking. According to the survey, 60 percent of drivers give up on finding a spot, and 27 percent of drivers had been in an altercation with someone in the past year over a space. RIOC hopes its new system will reduce traffic congestion, emissions, and driver frustration.

Martinez believes that parking is not only an important city planning tool, but one that will be used even more in the future. “As the technology becomes more widespread, the implementation will become a common recommendation for planners to make in order to reduce traffic congestion, improve on street parking availability and revenue,” he says.

Justin Bean is marketing manager for Streetline, Inc. He can be reached at justin@streetline.com or 650.242.3412.