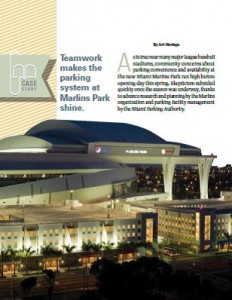 As is true near many major league baseball stadiums, community concerns about parking convenience and availability at the new Miami Marlins Park ran high before opening day this spring. Skepticism subsided quickly once the season was underway, thanks to advance research and planning by the Marlins organization and parking facility management by the Miami Parking Authority.

As baseball fans streamed into the gleaming new Miami Marlins ballpark for the season opener on April 4, they experienced the lavish features of the $515 million stadium in South Florida. Passing through the live entertainment in the art-dotted plaza, they enjoyed cuisine from an array of Latin-influenced food vendors, two 24-foot aquariums flanking home plate, and a colorful sculpture by artist Red Grooms that explodes with movement after every home run. Towering over it all was the facility’s signature element: a massive retractable roof that opened shortly before game time to reveal the moon and stars above.

The evening was the culmination of years of negotiation and planning by Miami-Dade County, the City of Miami, and the Marlins organization. After many seasons of playing in Sun Life Stadium, home of the Miami Dolphins, the Marlins sought to move to a new, purpose-built facility. Miami’s antiquated Orange Bowl stadium was demolished and construction of Marlins Park began in its place in 2009.

Planning
Starting with a clean slate gave planners the opportunity to think and rethink the use of the new stadium site. Whereas the old Orange Bowl had 70,000 seats and only 3,500 parking spaces, Marlins Park seats 37,000 fans and can accommodate 5,700 vehicles in four garages and six surface lots. Additional parking in the surrounding neighborhood and trolley-accessed lots accommodate demand during peak attendance.

The property’s four garages are designated for use by season ticket holders and all other prepaid parking customers. Planners gave strong consideration to wayfinding during the design process. Strategically located on the four corners of the site, each garage has a unique themed name (First Base, Home Plate, Third Base, and Center Field) and color scheme that is reflected in garage banners, flags, and signage.

Though there are no reserved spaces in the garages, each user is assigned to a specific garage to reduce traffic flow. Parking voucher colors correspond to the garage colors. Parking staff use handheld units to quickly verify parking vouchers upon entry, reducing congestion and facilitating egress at garage entrances.

The Miami Parking Authority worked closely with the Miami Police Department to design and standardize the traffic flow to each garage so prepaid parkers could easily learn the routes to their designated garages. Public transportation routes were designed to avoid vehicular traffic routes where possible.

Design
The stadium’s four garages were developed specifically for special event parking, with broad ramps to accommodate heavy traffic flow both entering and exiting. Elevators and stairwells were designed to handle heavy foot traffic. On the ground level, 53,000 square feet of retail space fronts the major thoroughfares. At press time, the Miami Parking Authority was working with commercial real estate firm Terranova to identify restaurant and retail tenants to connect with the surrounding community and serve area residents year-round.

Under the revenue-sharing agreement, the city of Miami receives all income from retail space rentals as well as all non-game day parking infrastructure. The Marlins buy all of the garage spaces on days they play, and resell the spaces at higher rates.

Controversy
As with any similar public-private undertaking, the project endured its share of controversy leading up to opening day. One lightning rod of criticism was a perception that the transportation and parking system designed to serve the park was inadequate. In response, the Marlins and Miami Parking Authority identified additional satellite parking locations and devised trolley routes to serve them. Miami-Dade Transit also bolstered the options available to patrons by creating a new shuttle service from a nearby Metrorail station.

Another concern came from residents of the Little Havana neighborhood, who began to voice their anxiety about game-day traffic jams and their own parking rights. These residents were accustomed to heavy traffic in the old Orange Bowl days and even profited by selling parking in their own front yards. Marlins Park hosts upwards of 81 home games per season (compared to eight to 10 football games per year at the Orange Bowl), as well as various special events all year. Residents faced having their streets cleared of all on-street parking on game days, and would be forced to move their own cars as part of that.

The Miami Parking Authority developed an intensive communications program to reach out to residents on a one-on-one basis, explain their parking options, and ensure that all affected residents were issued parking decals that enabled them to park in front of their own homes on non-game days and in designated lots on game days. Dozens of residents attended a community open house hosted by the authority to educate them about the parking system. All five local TV stations and several print publications covered the event.

Outreach
The authority developed positive messages that emphasized progress towards addressing the communities’ concerns, and used social media channels that included Twitter, Facebook, and YouTube to get those messages out. It then partnered with the Marlins to develop a special parking and transportation page on the team’s website that was regularly updated as new travel options became available.

All messaging encouraged fans to arrive early at the park to acquaint themselves with the property. Fans, to their credit, listened and healthy crowds arrived at the park up to two hours before game time. Community concerns about gridlock and chaos subsided after the first few games, and subsequent media coverage has rarely mentioned transportation or parking in anything but a positive light. Fans arrive happily at Marlins Park not just by auto, but by foot, bike, Metrorail, and trolley.

Teamwork is as important in parking management as it is in baseball. Working together, the Miami Parking Authority, Miami-Dade County, and the City of Miami showed that that good planning and communication can overcome a tide of negative perceptions. Play ball!

Art Noriega is CEO of the Miami Parking Authority. He can be reached at anoriega@miamiparking.com or 305.579.4910.