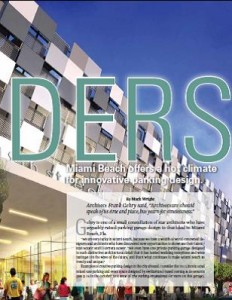 Gehry is one of a small constellation of star architects who have arguably raised parking garage design to that ideal in Miami Beach, Fla.

“We are very lucky in Miami Beach, because we have a wealth of world-renowned designers and architects who have discovered new opportunities to showcase their talent,” says Mayor Matti Herrera Bower. “We even have one private parking garage designed to such distinctive architectural detail that it has hosted wedding receptions and wine tastings! It’s the wave of the future, and that’s what continues to make Miami Beach so trendy and unique.”

Examples of creative parking design in the city abound. Consider the 1111 Lincoln Road mixed-use parking and event space designed by Switzerland-based Herzog & de Meuron (see p. 16 in the October 2011 issue of The Parking Professional for more on this garage). Developer Robert Wennett literally calls this work of urban sculpture home; Herzog & de Meuron integrated a residence onto the top of the garage for him.

Miami-based Arquitectonica designed the Ballet Valet at 630 Collins Avenue in the 1990s. Informally dubbed the “Chia Pet garage” because of the distinctive outgrowth of foliage surrounding each of its five parking decks—described by the firm as “a vertical green zone and a monumental topiary”—the effect camouflages the building’s purpose as a parking facility.

The five-story, 500-space Park@420 garage, designed by Mexico City-based architect Enrique Norten’s firm TEN Arquitectos, opened last fall at 420 Lincoln Road in the Miami Beach architectural district. Part of a $40 million retail, office, and entertainment center anchored by an historic 1940s building, the top four stories of the garage are enclosed by perforated panels, making good on a city requirement that the surrounding neighborhood be shielded from any visible raw light sources such as headlights.

Los Angeles-based Gehry Partners LLP designed the Pennsylvania Avenue Parking Garage as part of the famed architect’s work with the New World Symphony. Opened in January 2011, the top five decks of the six-level, 550+ space facility are wrapped in woven metal mesh panels. LED lighting is integrated into the mesh, giving the façade a constantly changing cascade of color at night.

London-based Zaha Hadid Architects is designing the new city-owned Collins Park Garage. Construction of the project, which was initially projected to cost approximately $12.5 million, is reportedly scheduled to begin later this year. While the design was not final at press time, the initial concept shows five layers flowing around in asymmetrical figure-eight swirls and has been likened to a sun-whitened, wind-sculpted ecosystem for both cars and people.

Other local garages that explore the natural tension between taste and task include the seven-level, 654-space City Hall Annex designed by Chicago-based Perkins+Will that was completed in 2009; the planned 450-space Sunset Harbour garage being designed by Arquitectonica for a Scott Robbins Companies retail complex on Bay Road; and several robotic parking facilities of various sizes and designs.

A History of Iconic Design
Form and function have a symbiotic relationship, and Miami Beach has a long record of recognizing, leveraging, and cultivating that connection.

“Design is such a focal point of our city,” says William Cary, assistant planning director for the City of Miami Beach.

Beginning with the emergence of Mediterranean Revival and Art Deco as expressions of prosperity and optimism in the 1920s and 30s, diverse influences from multiple eras—the Great Depression, World War II, post-war modernism, trans-Atlantic ocean liners, the space age—have shaped the architectural history of Miami Beach along a continuum of design right up to the present day, says Cary.

“Miami Beach has probably the largest collection of Art Deco architecture in the world,” says Saul Frances, director of the City of Miami Beach Parking Department. “It has 10 historic districts and is proud and self-conscious about its aesthetics.”

Charles Urstadt, chair of the Miami Design Preservation League, credits the city for setting the design bar high. The planning board, design review board, and historic preservation board are “keenly aware of the architecture and often insist on the highest standards,” he says.

Urstadt adds, “There’s an understanding in the development community here that good architecture can pay off. When combined with retail, it can make a huge difference on the bottom line.”

Smart Business
While architects might yearn for timelessness, the yearnings of city leaders and developers are a bit more here-and-now. The combination of cutting-edge architectural design, renovated historic properties, a rich array of cultural, entertainment, and shopping opportunities, and sun-drenched beaches, fun dining, and a fabled nightlife make Miami Beach a vibrant and popular year-round destination for visitors from around the world.

“There’s a culture of design in Miami Beach that’s been consistent and they’ve stayed true to Art Deco,” says Miami Parking Authority CEO Art Noriega. “They’ve been at the forefront of changing the concept of what a garage looks like.”

Noriega also notes that a strong business case reinforces the design trend. “They’re in an environment where they have the economics to support it,” he says. “They can afford to be a little more cutting-edge, because they can charge more and they’ll get more people into those spaces.”

Outside of Miami Beach, parking design around the region tends more toward the pragmatic. Across Biscayne Bay in Miami and its neighboring jurisdictions, customers want accessibility and affordability, says Noriega. They might appreciate the artful design of iconic structures, but are more likely to steer their own wheels into the least expensive, most convenient parking spot available near their destination.

Santos attributes the emergence of iconic garages in Miami Beach to the city’s own heritage and circumstances. “There’s kind of a gray area in the combination of art and architecture that’s local and site-specific down here,” he says.

High Demand
It’s fair to say that Miami Beach would not have such a crop of new garages absent a significant need for more parking.

“Miami Beach suffers from a lack of parking in areas that receive high volumes of visitors,” says Zaha Hadid. “It is a real obstacle for its residents at peak times. The city commissioned several studies for how to improve infrastructure and resident mobility. One of the conclusions was to provide additional parking both strategically and creatively.”

“Creatively” doesn’t mean merely putting a pretty face on a garage. Hadid adds, “In our work, we always look for ways to design buildings and structures that deliver more than just a single purpose or immediate function. The Collins Park Garage is a public parking garage and ground floor retail building within the Collins Park Area. A number of cultural buildings are located in the area and we aim to develop a parking structure that participates in and enhances the surrounding context by studying ways to link the area together to provide a unifying vision.”

Being bound on all sides by water also constrains the city’s options. With just 7.1 square miles of land, nature offers no additional space on which to locate more much-needed vehicle storage.

“I’ve always been a preservationist at heart,” says Bower. “But just because I like protecting world-class architecture of the past doesn’t mean I don’t enjoy the creativity of the future. Miami Beach has always been on the forefront of design and architecture. With art and culture so integral to our identity, we’re forced to be innovative and creative like no other city. One thing that continues to be lacking in our city, however, is parking. Public/private partnerships have allowed for extraordinary creativity in designing our newest parking structures. They’re not a place to hide a car anymore; they have become complexes that showcase retail, restaurants, and events!”

Parking Redefined
“We’ve known the only way we can preserve our buildings is by making our parking garages not only non-overwhelming, but a compact, integral part of our design environment,” says Cary.

The city concluded that it’s important to look at parking garages in a different way in dense urban environments. They have to be well-designed and play more than their traditional functional role of simply storing cars.

“We have redefined the parking garage,” Cary says. “We made up our minds we would have vertical lots that are progressive and part of our architecture and culture and technology and time.”

The city also decided that including a highly interactive storefront area at the base of a garage would prevent it from looking like “a dark well of nothing,” as Cary puts it. So, it passed an ordinance requiring the ground floor of new garages to be active, habitable space, either residential or commercial.

Likewise, the city requires that levels above the first floor “have a design that’s stimulating and not just standard,” says Cary, removing the negative connotations some associate with more utilitarian garages. The resulting designs have generated significant media coverage, stoked debate, and added architectural heft to that Miami Beach brand.

“Who would have thought garages would be cutting-edge?” observes Urstadt. “They certainly dominate the cityscape and there’s no reason they shouldn’t be significant.”

Of course, artful development must nonetheless live within its means. The city balances its vision of architecturally significant garages with practical budget realities.

These designs “can drive your costs substantially,” says Frances, “and you have to value engineer things. (The city) wants to see the best project and best design possible with the dollars available.”

Mark Wright is a contributing editor to The Parking Professional. He can be reached at mark@wrightscontent.com.