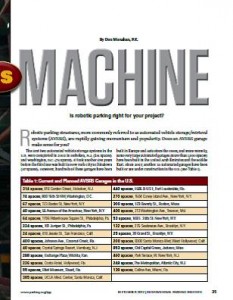 The first two automated vehicle storage systems in the U.S. were completed in 2002 in Hoboken, N.J. (314 spaces) and Washington, D.C. (74 spaces). It took another five years before the third one was built in New York City’s Chinatown (67 spaces). However, hundreds of these garages have been built in Europe and Asia since the 1960s, and more recently, some very large automated garages (more than 1,000 spaces) have been built in the United Arab Emirates and the Middle East. Since 2007, another 25 automated garages have been built or are under construction in the U.S. (see Table 1).

Designs
There are generally two types of AVSRS designs. One type consists of separate horizontal transport devices at each level and separate vertical lifts. A vehicle enters the transfer compartment and the patron vacates the stall and activates the storage process. A door opens on the side toward the storage vault and a motorized carrier slides under the vehicle and picks it up with arms that fold onto the wheels, or the car is on a pallet that is lifted slightly and removed from the compartment. The vehicle is then carried horizontally over to a lift platform and placed on the lift. The lift moves vertically to the desired storage level and the transport device carries the vehicle into the transport aisle and down to a storage space where it is deposited in a stall. The retrieval process works in the reverse order.

The second type is called a stacker crane, which is a motorized device that runs horizontally on rails on the ground floor with the lift mechanism built into the same piece of equipment. All vertical and horizontal movements are accomplished with this single device.

Because multiple transport devices can be accommodated with the former system, it has more redundancy and more throughput capacity than the stacker crane system.

AVSRS garages are gaining a lot of attention mainly because they accommodate the same number of parking spaces in half the space of conventional ramp-access, self-park garages. This results in faster construction, so the AVSRS garage can be placed into service faster and generate revenue sooner. When the AVSRS garage is located underground (as when under a building), the savings in underground construction cost and improved efficiency of the automated garage can often offset the cost of the automated parking machinery (see Table 2).

An AVSRS garage can also offer a high degree of convenience that’s similar to automated valet parking. The vehicle is more secure in the unoccupied storage vault and less susceptible to damage, as it is parked by machines. Further, these garages can be built on sites that are too small for conventional parking structures; they occupy a much smaller footprint and allow more site area for higher and better use.

Cost
As Table 2 illustrates, the cost of an above-grade, ramp-access garage is generally less than that of an AVSRS garage, provided the site is large enough to design an above-grade, ramp-access garage at an efficiency of approximately 320 square feet per stall. As the garage efficiency approaches 450 square feet per stall—as is typical for a garage under a building—the cost of an AVSRS garage becomes much more competitive. If one is constructing a three- or four-level underground garage, it is possible with the increased efficiency of the AVSRS garage to save one or more levels. The lowest one or two levels of the underground garage are the most expensive, so the cost savings may be significant.

Note that the unit cost of the AVSRS building is slightly less than the conventional, ramp-access parking garage. This is because the AVSRS does not require mechanical ventilation as the vehicles are transported without their engines running. Also, minimal lighting is required in the unoccupied storage vault, less expensive industrial stairs can be provided, and pedestrian elevators are not required. Further, the height or depth of the AVSRS garage may be only 7 to 8 feet, compared to 10 to 11 feet for a conventional garage. Minimizing the depth is an important consideration in an underground garage where there are poor soil conditions and/or a high water table.

Operating cost is also an important consideration. Table 3 indicates the estimated operating cost per space for a minimum capacity parking structure of 200 cars with automated pay stations and no attendants.

The operating cost for the ramp access garage is based on Walker Parking Consultants’ survey of more than 150 parking structures in 20 states with a median size of 720 spaces, from 2001 to 2005. The operating costs for the AVSRS garage are based on estimated adjustments from the conventional garage operating cost, except for the maintenance cost and electric utility cost, which were obtained from two different AVSRS suppliers.

Reliability
Reliability of the AVSRS system is an important consideration. The AVSRS components include redundant devices to provide 99.96 percent reliability. If one motor is required to operate a transport device, two or more are provided. Multiple servers with backup emergency power are provided to improve reliability of the computer system. The system can be monitored remotely via the internet with a manual override feature to remotely correct minor issues. The programmable logic controllers (PLC) are the brains of the system. Each PLC has 98 percent reliability. When paired with another PLC, the reliability improves to 99.96 percent. Those redundant components make the AVSRS system very reliable.

Is an AVSRS garage right for you? Only you know the answer to that. But there’s no question that they are growing in popularity and becoming a viable option to consider.

Look for a case study on the City of West Hollywood, Calif.’s new automated garage in a future issue of The Parking Professional.

Don Monahan, P.E., is vice president of Walker Parking Consultants. He can be reached at Don.Monahan@walkerparking.com or 303.694.6622.