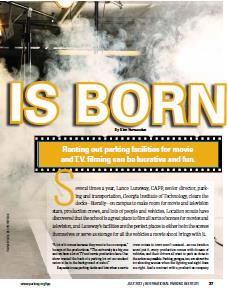 Several times a year, Lance Lunsway, CAPP, senior director, parking and transportation, Georgia Institute of Technology, clears the decks—literally—on campus to make room for movie and television stars, production crews, and lots of people and vehicles. Location scouts have discovered that the school is a great place to film all sorts of scenes for movies and television, and Lunsway’s facilities are the perfect places to either be in the scenes themselves or serve as storage for all the vehicles a movie shoot brings with it.

“A lot of it comes because they want to be on campus,” he says of the productions. “The university is a big one and we have a lot of TV and movie production here. One show wanted the back of a parking lot off our student union to be in the background of a shot.”

Requests to use parking decks and lots when a movie crew comes to town aren’t unusual—as one location scout put it, every production comes with dozens of vehicles, and their drivers all want to park as close to the action as possible. Parking garages, too, are attractive for shooting scenes when the lighting and sight lines are right. And a contract with a production company can equate to liquid gold for the facility owner: as Lunsway puts it, “A lot of times, a lot will be rented for a certain amount and the budget isn’t usually an issue with them.”

He says that if a production company comes calling, it’s absolutely worth sitting down to talk with them. And location scouts say once they’ve worked with a particular facility owner or manager, they’re very likely to revisit that same lot or garage when they’re filming in the area again. Long story short, putting a garage or lot out there to location scouts and filming companies can equate to almost free money without much hassle.

Act One: What the Movies Want
“When I’m looking for filming locations, I’m generally looking more for a deck structure than a lot,” says Atlanta location scout Jason Underwood. “Here in Atlanta, parking facilities that are used as filming locations are generally multi-floor structures of some kind that are actually purposed in the film as something other than a parking deck.”

That’s not to say that shows such as the “Parking Garage” episode of Seinfeld or the dark scenes from “All the President’s Men” won’t use a real garage for filming—they do. But there aren’t that many garage scenes in major movies, and garages can morph into other things quite well.

“I was working on ‘Batman Begins,’ says Chicago scout James McAllister. “We were trying to find a rooftop that sat a little lower in the city. We needed it to be surrounded by taller buildings. Someone I was working with suggested looking at parking garages. It made sense—they’re usually seven to 15 stories tall in Chicago. They sit lower, and you have this great expanse of buildings around you. That has become an attraction.”

You read it here—the rooftop scenes you remember from that film were made on top of a parking garage, and the owner rented his facility to the movie company to make it happen.

Underwood agrees, saying he’s twice used the same Atlanta garage for rooftop filming scenes. “We can have unfettered access to that without worrying about interrupting people in their offices or apartments,” he says. “It makes it much easier from a logistical standpoint to film.”

For inside scenes, he says, the garage’s design can make it very attractive to film crews. “Parking structures all have different designs,” he says. “Sometimes you want to see a person on one level and peek through to another level. Lots of garages have that double helix that you can see through. And in a dark night scene that needs a circular driveway to look down through, a garage can be perfect.”

Act Two: When Filming Isn’t the Thing
Even when a movie or television show has no scene that needs a parking structure, scouts say lots and garages that are very close to filming locations are always needed. And that’s for the same reason cities, hospitals, universities, and airports need structures to begin with: people always need somewhere to park.

“We take a lot of parking,” says Underwood. “When we go somewhere we may have 75 people who all have cars. We might have six travel trailers, work trucks, four 40-foot tractor-trailers, and two or three five to 10 ton trucks. And they all have to have a place to park.”

He routinely contracts with surface lot owners for a week or two during filming for just that reason. And here, location is key.

“All of that support parking is going to be tied to whatever filming location we have very tightly,” he says. “That’s really luck of the draw. It depends where we’ve chosen to film.”

Lunsway knows how that works: he frequently hosts parking for film crews who are working at the Biltmore Estate across the street from Georgia Tech.

“They’ll take 100 stalls just to set production vehicles,” he says. “It works out—we can ask a premium price for those, and they’ll pay it.”

“Surface lots work great for us,” says McAllister. “It’s quick for the crew to come and park their cars and vans, and then at the end of the day they pick them up and they’re gone. We can use a major city parking structure too, if there’s a way to validate the tickets that the crew understands.” He says he routinely rents 100 to 300 spaces per day for production parking.

Act Three: Getting Their Attention
Renting out several hundred spaces a day for a week or two at a time with guaranteed payment sounds pretty good to most parking owners and operators. Luckily, scouts say getting their attention is relatively easy.

“Any parking facility has visual interest,” says Underwood. “The best thing to do is contact your local film commission.” These can be found in nearly every major and mid-sized city in the U.S., and they work with producers, directors, and scouts to bring television and movie production to their areas.

“Almost every film commission keeps a book of film-friendly locations,” says Underwood. “You just call the one in your area and tell them you have a property that you’d like them to know is available for filming.”

McAllister says the film commission will either offer to send a photographer out to take pictures of the facility, or ask the owner/manager to do that for them.

“Send photos from and of the rooftop and multiple levels,” he says. “Most commission offices have scouts who will come out and shoot it for you. Using a parking garage is somewhat of an easy set—it’s easy access for the crew, and they provide a nice area to build a set or do set dressing. That’s why the rooftops are usually the most attractive parts of a parking structure for us.”

To be considered for staging and parking during filming, parking professionals should ask the film commission for a list of production editors they work with, and then email them to offer their lots or decks for parking. They can also ask to join the film commission as vendor members.

“Companies understand that this can be a lucrative thing because we’re constant,” McAllister says. “Usually, we prepay as well. Ideally it would be great if we were billed for the spaces we use, but we usually buy a certain number of validations every day.”

Once a location scout calls, a quick response is key to getting them to use a certain facility for the first time.

“Once one of us contacts a parking company, the main thing is speed of response,” says Underwood. “Usually, we want to know if it’ll work now. If I don’t get a call back for two or three days, I’ve already moved on and found somewhere else.”
That said, once they use a facility successfully, they’re quite likely to return in the future.

“We are almost always going to exercise a known quantity over an unknown,” he says.

Act Four: Making it Work
Although renting out several hundred spaces for several days to weeks can be quite lucrative, scouts and those who’ve done it warn that it’s not without some hazards.

“The parking lot owners need to consider whether this is worth their time to deal with,” says McAllister.

Underwood agrees. “There are some concerns about driving a wedge between monthly parkers and management,” he says, noting that for afternoon or evening shoots, spaces may have to be held empty most of the day, and that regular parkers can be nudged to other facilities on days the production company needs much of a lot or garage.

“Assuming your lot isn’t at 100 percent capacity, we can usually move things around and make it work,” he says.

Owners should also be prepared to negotiate for rates. “If we’re putting 150 people in deck parking, we generally like to see a 30 percent discount on the daily rate,” he says, although some owners and managers say filming brings in more. “We might buy 150 to 200 spaces, though, depending on what we’re doing that day.” And some filming takes place overnight, which means the production crew needs access to spaces nearly 24 hours a day.

“If we have a 12-hour shooting day that starts at 7 a.m., people are going to start to show up three hours before then,” says McAllister. “So between 4 a.m. and 7 a.m., you’ll have a few waves of people coming in. And then right before 7 a.m., you’ll get a massive wave of people. When we wrap for the day, everyone leaves at the same time. So we need facilities that are convenient for getting everyone out, too.”

Owners can expect to sign contracts that specify times, numbers, and rates, and are encouraged to negotiate those conditions and have their own legal counsel review before they sign.

Above all, scouts say, flexibility and honesty are key to making a movie parking agreement work.

“The only thing I can say with any certainty about any shoot is that it’s going to change,” says Underwood. “From the time I make initial contact until the time we end up onsite rolling camera, we’re going to go through several different iterations of methods of accomplishing the work. We want you to say yes as much as you can, but a good locations person will understand that sometimes we’ll ask for things you can’t give us. That’s OK. It’s honesty that matters.”

“It’s normally pretty easy,” says Georgia Tech’s Lunsway, who admits that it’s “pretty cool” to see his facilities up on the big screen. “What a lot of people don’t understand is that it’s not like a film crew is there for three or four months. They come in, get their work done, and they get out.”

At the end of the day, Underwood says, most owners find it well worth their while.

“It’s found money,” he says. “It’s not going to be the same as turning a lot over four or five times in a day, but it’s guaranteed.”

Kim Fernandez is editor of The Parking Professional. She can be reached at fernandez@parking.org or 540.371.7535.