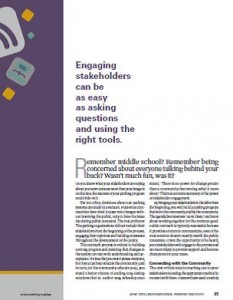 Remember middle school? Remember being concerned about everyone talking behind your back? Wasn’t much fun, was it?

Do you know what your stakeholders are saying about you now? Because more than your image is on the line; the success of your parking program could ride on it.

Far too often, decisions about our parking systems are made in a vacuum. Numerous communities have tried to pass rate changes without involving the public, only to have the issue die during public comment. The real problem? The parking organizations did not include their stakeholders from the beginning of the process, engaging their opinions and building consensus throughout the development of the policy.

The outreach process is critical to building a strong program and ensuring that changes to the system are met with understanding and acceptance. It’s true that you won’t please everyone, but if you can help educate the community (and in turn, let the community educate you), you stand a better chance of finding long-lasting solutions that fit. Author Meg Wheatley once stated, “There is no power for change greater than a community discovering what it cares about.” That’s an accurate summary of the power of stakeholder engagement.

By bringing your stakeholders to the table from the beginning, you will build a parking program that is for the community and by the community. The agenda becomes less “us vs. them,” and more about working together for the common good. Public outreach is typically successful because it provides a forum to communicate, even if the final solution doesn’t exactly match the public consensus. Given the opportunity to be heard, your stakeholders will engage in the process and are more likely to provide support and become champions for your cause.

Connecting with the Community
The first critical step in reaching out to your stakeholders is finding the appropriate method to connect with them. Planners have used a variety of methods over the years, with the more traditional approach being workshops or public meetings that are typically advertised through press releases in local newspapers. With the arrival of new technology each passing year, planners have more powerful tools at their disposal that can be used to interact with stakeholders.

The most commonly used ways to engage stakeholders are media and workshops. Using the media can be effective for informing the public of important information, but it can also be used as a broader educational tool. The local media can be used as a partner in the process, following the progress of the project or plan, and becoming an advocate for the project. The media can also be used to explain complicated and contentious topics, alleviating many of the public’s concerns. Workshops are useful in that they allow stakeholders and planners to engage in free-flowing conversation where questions can be immediately asked, answered, and expounded upon. The drawback to workshops and meetings is that they are time-consuming and expensive for planners, and they can be inconvenient for stakeholders who must take time out of their busy lives to attend. Depending on the project or plan, meetings can last one to four hours. As a result, turnout at workshops can be low, and the opinions shared may not necessarily represent the majority.

Websites are another useful tool for engaging stakeholders. Planners can post project and meeting information, documents, graphics, maps, and links to other pertinent websites and social media. Over the last decade, websites have become an integral part of stakeholder outreach programs because they often act as the front line of information and the face of a project or plan. Websites traditionally have not been used to obtain feedback, but new technology allows for direct interaction, surveys, voting, and scenario analysis, all through a site’s existing framework.

With new technology, planners have other options for reaching the broader community. Social media such as Facebook, Twitter, and foursquare are being used to post information, videos, and photographs. Social media also provides a convenient platform for stakeholders to voice their opinions. Communication with social media is ongoing and less intimidating than speaking at a workshop. Furthermore, setting up accounts requires little effort and is typically free. IPI has several resources on its website (www.parking.org) to help you leverage social media, including the Social Media Marketing Guide for Parking Professionals.

Getting the Right Information
Connecting with stakeholders is not just about providing them with information; it’s also about obtaining local knowledge, which is critical to making a plan or project successful. There are a number of ways to engage stakeholders that blend seamlessly with the methods described above. Surveys—commonly used to obtain stakeholder input—are usually handed out at meetings or mailed. However, the latest practice is to post surveys on the Internet. Web-based surveys are easy to set up and distribute, and easy for stakeholders to complete and submit, resulting in higher response rates.

A less formal method of obtaining stakeholder input is through social media. As discussed previously, stakeholders can post their opinions and questions on social media sites. Unlike surveys, social media is open-ended, free-flowing, and continuous. Planners are able to collect responses as they are submitted and use that information to gauge how a plan is being perceived by the public.

These tools for obtaining stakeholder input can be—and often are—used in conjunction with each other. Deciding which tools to use depends on the stakeholders and knowing what methods they will be likely to use. However, even with the right tools, poor communication can result if information is presented poorly or questions are phrased incorrectly. It is important to know how to phrase your wording to obtain the desired feedback. For instance, if a survey is trying to determine if people will accept higher rates for on-street parking, the question should not directly ask stakeholders if they prefer higher rates. The answer to that question is always no; everyone wants to park for free. Instead, the question should be phrased so that respondents have to choose between aspects of the parking system that are most important or desirable to them. Ask them to choose between lower rates, availability of spaces close to their destinations, and the ability to find available spaces quickly. Forcing stakeholders to choose between these types of options will provide a better indication of true preferences.

Outreach in Action
Many communities understand these concepts and are involving stakeholders the correct way. Below are three examples of parking programs that used the community to inform their decision-making process.

Phoenix, Ariz. For the recently completed City of Phoenix on-street parking study, citizen and business owner surveys were developed to gauge preferences on new parking technology. Because business owners have a different perspective of on street parking, a separate survey was created with questions that would reveal business preferences. Both surveys were launched using SurveyMonkey, a web-based survey tool. The link to the survey was embedded in a QR code, which was distributed on information cards. The QR codes could be scanned with smartphones, instantly linking the public with the online survey. The survey had more than 500 respondents in a three-week period, which is exceptional for a survey of that duration and type.

Tacoma, Wash. When Tacoma tried to implement paid parking, it encountered strong public opposition (see p. 42 of the February 2012 issue of The Parking Professional). In response, the city created a parking advisory task force made up of citizens representing various organizations and businesses in the community, charged with making decisions regarding paid parking in the downtown area. The city worked with the task force to define the goals of both the downtown and the parking system, and then sought to educate the public about the benefits of paid parking to the businesses and community. To keep the public informed, the city dedicated a page on its website to the task force to provide information about the group’s proceedings. The city reports that creating a task force comprising citizens and community representatives has been instrumental in promoting the new paid parking system as well as educating the public about why the changes should occur and what benefits the system will bring to the community. After years of fighting the public about paid parking, the city now has new parking meter technology on the streets and charges for parking six days a week.

Anchorage, Alaska. The City of Anchorage recently underwent a complete rebranding of its parking management system. The city wanted to do more than just create new signage; staff wanted to build a new, positive relationship with the public. Facebook, Twitter, and foursquare accounts were used to collect feedback from the public as well as post information and news, pictures, links to newspaper articles, and videos. To reduce the negative image of parking enforcement officers, the city allowed the media to shadow a parking enforcement officer who was issuing citations. The pictures and story were posted online. Engaging citizens through social media had immediate and extremely successful results. The city has received positive feedback, and the parking system as a whole is no longer stigmatized by a negative reputation.

As demonstrated by the efforts taken in these three cities, there are many ways to successfully engage stakeholders. With new technology, you have more options available to engage the wide range of stakeholders in your community. In return, your stakeholders will become more involved and may feel a sense of ownership for the project or plan. Your stakeholders are an invaluable resource with unique perspectives and a depth of knowledge that is often overlooked. If you take the time to think about an appropriate engagement strategy, the wealth of information could be surprising, and will result in better projects and plans that represent the community’s desires.

Adria Koller, AICP, is a parking planner with Kimley-Horn and Associates, Inc. She can be reached at Adria.Koller@kimley-horn.com or 520.352.8655.

Brett Wood, P.E., is associate parking and transportation consultant with Kimley-Horn and Associates, Inc. He can be reached at brett.wood@kimley-horn.com or 602.906.1144.