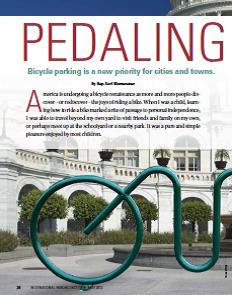 America is undergoing a bicycle renaissance as more and more people discover—or rediscover—the joys of riding a bike. When I was a child, learning how to ride a bike marked a rite of passage to personal independence; I was able to travel beyond my own yard to visit friends and family on my own, or perhaps meet up at the schoolyard or a nearby park. It was a pure and simple pleasure enjoyed by most children.

As Americans’ transportation and land uses changed after World War II to accommodate the automobile, many of our newer communities were not designed to allow children—or anyone else—to safely ride even short distances. Yet the thrill of riding a bike, using our own power to navigate through our communities, continues even to this day.

People are now discovering that bicycles are not just for recreation, but provide a convenient, healthy, and inexpensive way to get to work, school, appointments, recreation, and even shopping. Not only do bicycles provide good exercise, they help you save money. Last August, the American Automobile Association (AAA) pegged annual operating costs for a sedan at $8,776; for an SUV, the cost was $11,239. In contrast, you can purchase a new, good quality bicycle for between $800 and $1,500, and annual costs for new tires and maintenance average $200. There are real economic benefits to burning calories instead of fossil fuel.

Then there are the demographics of our aging society, with almost 10,000 Americans turning 65 every day. A growing number of Baby Boomers are giving up large-lot, automobile-dependent suburban lifestyles in favor of walkable, convenient neighborhoods that provide easy access to shopping and services without having to get in a car. Bicycles are a perfect fit for these more urbanized communities.

Communities are also realizing the benefits of increased bicycle use. When streets are designed with bicycle facilities such as bike lanes, sharrows (street lane markings), or separated cycle tracks, there’s less congestion, pollution, and speeding. Streets become safer for all roadway users as accident rates decline for those in cars as well as for cyclists and pedestrians.

As Portland, Oregon’s Commissioner of Public Works from 1986-1996, I initiated a bicycle program to provide residents with a greater range of transportation choices. I also suspected that, if done right, investments in bicycle infrastructure along with improved public transit could help revitalize our downtown core and strengthen our neighborhoods. Today, after investing $60 million—about the same price as one mile of a four-lane urban freeway—the City of Portland boasts 324 miles of bikeways, is arguably the nation’s most bicycle friendly city. This modest but comprehensive investment of policies and programs has spurred bicycle use by 400 percent in the past 15 years, outpacing the growth in auto use as well as transit. Today, more than 15 percent of Portlanders use their bicycles for basic transportation needs; in some neighborhoods, that rate is 28 percent.

These impressive figures have helped stretch dollars as well, measurably affecting the city’s transportation budget. From 1991 to 2008, the Hawthorne Bridge, one of the most heavily traveled gateways into the downtown core, had a 20 percent increase in traffic. Ninety-five percent of that increase was in bicycle traffic. The city met the increased demand by simply widening the bike lanes instead of investing millions of dollars to expand the bridge decks and ramps to accommodate more cars into an already-congested downtown.

The increase in bicycle use has proven to be a boom for Portland’s economy. The city currently has 175 bicycle-related businesses that contribute about $100 million to local coffers, taking hold even in these tough economic times. This local growth mirrors larger trends: nationally, bicycles are a $5.8 billion industry, with close to 100,000 people employed in the research and development, distribution, retail sales, service, and tourism sectors.

Where Parking Fits In
As bicycle use has increased, so has the need for bicycle parking. Cyclists, like drivers, need convenient access to secure parking at their destinations. With more than 1.5 million bicycles stolen every year, fear of bicycle theft is a significant deterrent to bicycle use. Yet secure and convenient parking is often overlooked at commercial areas, businesses, schools, and even transit hubs. As cities as diverse as Portland; Chicago; Madison, Wisc.;and Denver experience greater bicycle use, they are developing manuals to guide their planners and engineers in constructing the best parking facilities. Elements to be considered include location, type of rack, number of spaces, short- and long-term parking, open or covered spaces, signage, and costs2. Like any other element of the streetscape, bicycle parking must provide function without interfering with other users of the public space.

Adequate and convenient bicycle parking not only signals the commitment of a business and commercial area to a green economy, but often offers artistic elements to the streetscape and provides a welcome buffer between street traffic and pedestrians enjoying sidewalk tables, shop windows, and conversation with their neighbors.

A dramatic increase in demand for bicycle parking in Portland has kept city engineers on their toes. Businesses in both the downtown core and outer neighborhoods have asked the city to install bike corrals for their customers, replacing two on-street auto parking spaces with 20 to 24 parking spaces for bikes. In fact, bike corrals have proved so popular in Portland that the city has installed—at business owners’ requests—41 bike corrals, and 65 additional requests are currently waiting for funding. When more than 100 small business owners request the replacement of car parking with bike corrals, you know bicycling has become mainstream.

Of course, bicycle parking is needed at schools, institutions, government offices, universities, and transit centers as well. We certainly wouldn’t expect people to drive to any of these destinations if there weren’t parking available; the same is true for bicyclists. The good news is that bicycle parking, whether on racks, in lockers, on the sidewalk or street, or in structured parking garages, costs much less than parking spaces for cars. According to the Bicycling and Walking Information Center, National Center for Walking and Biking, it is significantly cheaper:

Certainly, we will continue to rely on automobiles in our cities, suburban communities, and rural areas. Yet as more Americans discover the personal, environmental, and health benefits of using bikes for many of their travel needs, a good supply of secure and convenient bicycle parking will be needed. Planners, engineers, urban designers, and ordinary citizens are already recognizing this need and finding inexpensive, creative, and effective ways to make sure our downtowns and neighborhoods accommodate this most efficient of urban transport choices. They understand that supporting bicycles as a viable transportation option makes our families safer and healthier and increases the livability and economic viability of our communities.

Earl Blumenauer represents Oregon’s third district in the U.S. House of Representatives. He can be reached at 202.225.4811.