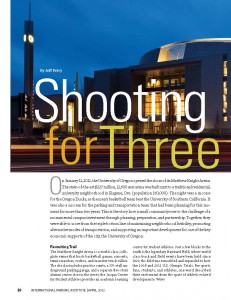 On January 11, 2011, the University of Oregon opened the doors of its Matthew Knight Arena. The state-of-the-art $227 million, 12,500 seat arena was built next to a traditional residential, university neighborhood in Eugene, Ore. (population 150,000). The night was a success for the Oregon Ducks, as the men’s basketball team beat the University of Southern California. It was also a success for the parking and transportation team that had been planning for this moment for more than two years. This is the story how a small community rose to the challenge of a monumental campus investment through planning, preparation, and partnership. Together, they were able to score from the triple bottom line of maintaining neighborhood livability, promoting alternative modes of transportation, and supporting an important development for one of the key economic supports of the city, the University of Oregon.

Recruiting Trail
The Matthew Knight Arena is a world-class collegiate venue that hosts basketball games, concerts, tennis matches, rodeos, and monster truck rallies. The site also includes practice courts, a 370-stall underground parking garage, and a separate five-story alumni center. Across the street, the Jacqua Center for Student Athletes provides an academic learning center for student athletes. Just a few blocks to the south is the legendary Hayward Field, where world class track and field events have been held since 1921; the field was remodeled and expanded to host the 2008 and 2012 U.S. Olympic Trials. For sports fans, students, and athletes, one word described their excitement from the spate of athletic related developments: Wow!

The nearby neighborhood had the same response, but with a very different tone. For neighbors, the scale of the changes and uncertainty were daunting. The neighborhood enjoyed the benefits of being on the edge of campus, but faced the pressures of increasing density. In general, the neighbors had supported Hayward Field and accepted the parking and transportation effects during the summer track and field events. The former basketball court had primarily affected the neighborhood to the south of campus.

Opening a new, larger basketball arena would relieve parking and transportation pressures in one neighborhood, but might add those pressures to another. The question became: how can the continuing operational issues of this large project be addressed? Construction activity can be mitigated through normal communication and enforcement methods. Eugene’s land use code, however, did not easily address continuing operational issues such as parking.

While the problem was not necessarily new, the solution was. A committee was formed with representatives from each entity to address any issues that might emerge after the occupancy permit was issued. What made the group more than just a standing committee was that it was built into the conditional use permit required for construction of the arena.

Game Plan
As part of the pending arena permit application, the Neighborhood Arena Liaison Committee (NALC) was formed in February 2008. This committee was established by the University of Oregon to help advise the arena project manager, staff, and design team on immediate construction issues and develop long-term mitigation strategies to address arena-related noise, litter, traffic, and parking. The NALC was an open committee that had dedicated representation from the Fairmount Neighbors Association (FNA) and local businesses, as well as representatives from the City of Eugene, Lane Transit District (LTD), and the university.

Ultimately, the NALC developed an Arena Impact Mitigation Agreement (Arena Agreement). It identified impacts to the local community, proposed mitigation to address the effects, and provided a forum to consider and address new issues as they arose. The Arena Agreement provided a template that allowed adjustments to be made without forcing neighbors or the university to go back through the land use process or file formal complaints with the city.

The Arena Agreement was signed in October 2008 by the city, university, and neighborhood. As part of the land use process, the Arena Agreement bound the university to complete a number of mitigation measures to help alleviate the effects of the arena on the nearby neighborhood. Some of the agreement highlights include:
Each event at the arena is classified based on projected levels of attendance and each level contains specific transportation demand management components that escalate mitigation requirements as more people are expected:
Level 1 is 0 to 4,000 attendees.
Level 2 is 4,001 to 6,500.
Level 3 is 6,501 to 9,500; athletic and university related non-athletic events.
Level 3-A is 6,501 to 9,500; non-athletic and non-university related events.
Level 4 is 9,501 or more.

Levels 1 and 2 events have minimal effects on the neighborhood. Events sized at Level 3 and above, however, do affect the local area, and the transportation demand management plan called for additional measures:
Operate arena shuttles.
Provide 275 valet bicycle parking spaces.
Enact traffic control to protect the neighborhood.
Supply temporary garbage cans in the arena area.
Enforce enhanced regulations in the Arena Parking District.

Courtside
The creation of a special Event Parking District was a compromise intended to maintain neighborhood livability while allowing the arena to host large events. The Event Parking District encompasses about 20 blocks. It allows up to two hours of parking Monday through Sunday, 7 a.m. to 11 p.m. Households in the district each receive two free residential parking permits (The City of Eugene is reimbursed by the university for each free permit). One-day guest permits are also free and supplied in packets of 10 permits each. In the eyes of the community, this parking district imposed very strict parking regulations that affected the day to day activities of the neighborhood. They included doubling fines during high-attendance events.

The city is expected to enforce the event parking district to maintain neighborhood livability and encourage arena attendees to park at event parking locations; it hired an additional parking enforcement officer and purchased a license plate recognition (LPR) system.

The LPR system was the solution to enforcing events that might take just more than two hours. Enforcement staff needed to quickly mark all vehicles parked in the neighborhood, focus on high-demand streets, and know exactly when to return to issue any citations. Sometimes, the window for issuing overtime violations in the district is less than 20 minutes.

Game Stats
Have the parking and traffic mitigation plans for the arena met their goals? To date, it has been viewed as successful, thanks in no small part to concessions made buy all three major entities.

As part of the agreement, a formal Arena Monitoring Committee (AMC) was formed to address issues as they arose. The AMC will continue to operate until either all members agree to not meet or the arena ceases operations. The AMC is composed of six members: two from each organization (neighborhood association, city, and university). The committee developed a set of ground rules and an operating charter, and can change the agreement as long as all six members agree.

An Arena Monitoring Report, finalized in July 2011, reviewed the major components of the agreement. In terms of the transportation modes for the sampled events, about 29 percent of the attendees arrived by transit, foot, or bike. Arena-related noise and litter in the neighborhood did not generally appear to be a problem.

The city’s parking enforcement data show that on average, 12 parking citations are issued for each Level 3 and above event. Anecdotally, it appears that event ticket prices may affect citation rates: high priced events such as an Elton John concert and Nike Slam (tennis) saw an uptick in citations. It is possible that attendees felt a $32 overtime violation was just an event parking price to park on the street in the neighborhood. Additionally, visitors from larger cities (e.g. Seattle) may not feel the city’s $16 fine (which doubles to $32 during events) is a parking deterrent.

The report also noted areas for improvement. Opening night had some small issues that were corrected quickly. In addition, a more unified communication strategy about parking was recommended for both the university and the city, and is currently being worked on.

Overall, the neighborhood has reported minimal event parking effects. That said, the blocks closest to the arena are heavily parked and the streets further away from the arena experience little to no event parking. The city has had to write relatively few parking citations, and this trend has held true over the last year. Partners in this endeavor are happy to see that the parking district is working!

Season Reflections
The Event Parking District provided an additional benefit to the neighborhood by virtually eliminating employee and student parking there. The neighborhood’s residential parking program, with two-hour parking limitations during the work week, had grown block face by block face over the last 20 years. There were still many patches of unregulated/free parking that campus faculty, staff, and students used for their daily parking needs. When all the streets became regulated and enforcement began, decades of parking behavior changed. From the neighborhood’s perspective, there was less cruising for parking on their streets and fewer vehicles parked in their neighborhood.

The development of the arena and the arena parking district represent profound changes in the community. The neighborhood’s day to day experience has changed with the enhanced parking regulations and the new developments next door. The city is expected to maintain enforcement services and assist with traffic mitigation measures. The University of Oregon has a new enterprise to manage, while maintaining a good relationship with the neighborhood and managing constraints spelled out in the Arena Agreement. Ultimately, the new arena allowed the city, the university, and the neighborhood to find a way, through sometime difficult conversations, to come together, develop a plan, and function as a community team.

Jeff Petry is the parking services manager for the City of Eugene, Ore. He can be reached at jeff.t.petry@ci.eugene.or.us or 541.682.5729.