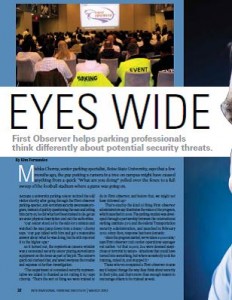 Mishka Chorny, senior parking specialist, Boise State University, says that a few months ago, the guy putting a camera in a tree on campus might have caused anything from a quick “What are you doing” yelled over the fence to a full sweep of the football stadium where a game was going on.

Because a university parking officer noticed the odd visitor shortly after going through the First Observer parking-specific, anti-terrorism security awareness program, instead of quickly questioning the man and letting him carry on, he did what he’d been trained to do: get an accurate physical description and call the authorities.

“Our officer stood off to the side for a minute and watched the man jump down from a fence,” Chorny says. “Our guy talked with him and got a reasonable answer about what he was doing, but he still reported it to the higher-ups.”

As it turned out, the mysterious camera-wielder was a Homeland Security officer placing surveillance equipment on the fence as part of his job. The officer’s quick call clarified that, and saved everyone the trouble and expense of further investigation.

“The Department of Homeland Security representative we talked to thanked us for calling it in,” says Chorny. “That’s the sort of thing we were trained to do in First Observer, and before that, we might not have followed up.”

That’s exactly the kind of thing First Observer administrators say illustrates the value of the program, which launched in 2008. The parking module was developed through a partnership between the International Parking Institute (IPI) and the federal Transportation Security Administration, and launched in February 2010. Since then, response has been fantastic.

“Since the program started, we’ve taken 10,000 calls,” says First Observer Call Center Operations Manager Pat Rather. “Of that 10,000, 354 were deemed suspicious or terrorist in nature—situations that could have turned into something, but where somebody took the training, called in, and stopped it.”

Those who’ve completed a First Observer course say it helped change the way they think about security in their jobs, and that’s more than enough reason to encourage others to be trained as well.

“A lot of our employees are saying they’re more aware of things after that training,” says Wanda Brown, assistant manager, UC Davis Health System. “They’re thinking about why something doesn’t look right as opposed to just that it’s violating a parking policy.”

“Parking matters,” he says. “Parking is important, and a little over two years ago, I saw The Parking Professional and became familiar with IPI. Upon reviewing the magazine, I became extremely interested in the industry because I saw the nexus between transportation security and parking.”

“I thought about it from the standpoint of the World Trade Center bombing in 1993 and the Oklahoma City bombing of 1995; in both cases, the terrorists were parked in the facilities and could have been observed by parking professionals. Had those professionals been trained in First Observer, could we have made a difference?”

Since partnering with IPI, the program has trained more than 7,000 parking professionals across the United States. All of that training has been free of charge to participants thanks to funding from the Federal Emergency Management Agency (FEMA), and is currently available online and in-person. Also available is a customizable training website for organizations of 100 people or more.

“It initially started off as a security grant program geared or directed at training truck drivers,” says Arrington. “It expanded to school bus drivers, and in 2008, it was renamed and re-branded, and then spread to all modes of transportation.”

Parking, he says, is critical in that mix.

“I spent 28 years with the Maryland State Police,” he says. “If an individual’s home is burglarized, chances are that the criminal drove a car of vehicle to the place of that crime, and then hauled the goods away with a vehicle on the roadways. There is a transportation nexus to all of the things we see happening today.”

That holds true for large-scale terrorism events as well. “When a target is selected, casing surveillance takes place,” he explains. “They do dry runs and have rehearsals. So a parking professional may start to see the same person in the same location for no apparent reason. And a rehearsal will look an awful lot like the real thing.”

First Observer trained professionals call their suspicions into a 24 x 7 call center, where information is routed to the Information Sharing and Analysis Center (ISAC). There, analysts work to determine if what’s been reported may be a sign of terrorist activity.

“The specialists start to ask probing questions,” says Rather. “We get a really good, detailed report, and then the information is compiled electronically and shared.” The analysts also link different reports to each other and with other intelligence, she says. “They try and figure out if this piece fits into a bigger piece,” she explains. “They figure out where it fits into the puzzle and push it out to other agencies.”

It can also be pushed out to specific transportation sectors, so that their professionals know to keep an eye out for activity. “If we see something happening in the motorcoach industry, for example, we’ll push it out to our industry partners and our industry affiliate,” says Rather. “They find that very useful.”

Currently, she says, First Observer has 127 affiliates in a number of transportation sectors. “All of those—everyone—has signed a standard letter that endorses the mission of First Observer and recognizes that national security is everyone’s responsibility,” she says. “I have all 127 letters framed and on the wall in the call center, and have space for more”

Effectiveness
Those who’ve taken First Observer training say it opened their eyes to activity that might not have seemed suspicious before they signed up for the program.

“I think what it really expressed to us was the importance of relaying information even if it seemed casual,” says Chorny. “I think people often see things like that and walk away.”

Brown agrees. “First Observer taught our employees to look at what seems out of place,” she says. “It helped our employees start looking in a more purposeful manner at what just doesn’t look right.”

She looks back on an incident where a parking officer noticed a man driving with a young child laying down on the seat of his car, took down the plate number, and called police. As it turned out, the child had been snatched from a local hospital by an abusive parent, who was arrested as a result of the parking officer’s call.

“Because the officer was so aware, she helped catch that person,” says Brown. “That’s what this is all about: looking at things not only from a parking violation perspective, but wondering what might be strange about what we’re seeing.”

The training opens professionals’ minds to things that seem fine at first, but may be suspicious, says Arrington. “We talk about the eight signs of terrorism,” he explains. “These are things people don’t otherwise think about—an individual approaches a parking professional and asks questions that seem innocuous but are really probing-type questions: things like what time does this lot open, when does it have the most vehicles, what is this parking facility near,” he says. “Taking photographs seems harmless, but if someone’s taking photos of things that aren’t of great concern, that’s something to watch out for.”

And success stories, he says, aren’t all that unusual.

“We held training last year in Dallas in preparation for the Super Bowl,” he says. “The training was at 10:00 that morning. Three hours later, a lady who took the training came back all excited, saying, ‘It works!’”

The woman left the training and noticed a man taking pictures for no apparent reason, Arrington says. “Without the training, she said she probably wouldn’t have noticed or thought about that. But she now saw it as being suspicious in nature and reached out to law enforcement who approached the individual, questioned him, and carted him off.”

“Those kinds of things—raising the level of awareness, teaching and training officers to observe, assess, and report—are what this is about,” he says.

And there are other benefits as well.

“One of the things we want people to leave with is a greater level of being security-minded,” he says. “It’s not something you turn off once you walk out the door and punch the clock for the day. You can certainly use this in your personal life. And the more people we have trained, the better success we’ll have in stopping the next event.”

Kim Fernandez is editor of The Parking Professional. She can be reavched at fernandez@parking.org or 540.371.7535.